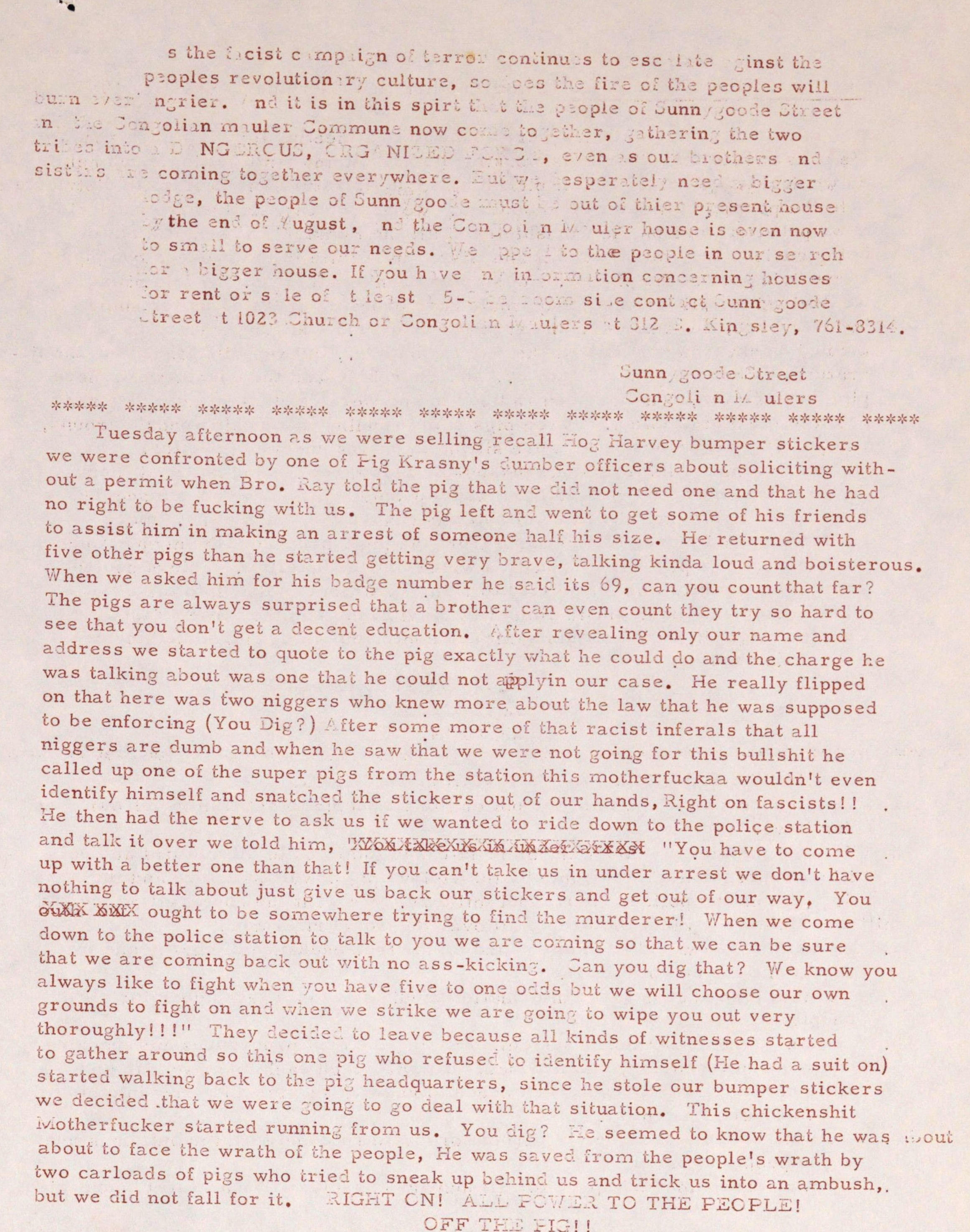 As the facist campaign of terror contiues to escalate against the peoples revolutionary culture, so does the fire of the people will burn even angrier. And it is in this spirit that the people of Sunnygoode Street and the Congolian mauler Commune now come together, gathering the two tribes into xxxxxxxxxxxxxxxx, even as our brothers and sisters are coming together everywhere. But we desperately need a bigger lodge, the people of Sunnygoode must be out of their present house by the end of August, and the Congolian Mauler house is even now to small to serve our needs. We appeal to the people in our search for a bigger house. If you have any information concerning houses for rent or sale of at least 5-8 bedroom size contact Sunnygoode Street at 1023 Church or Congolian Maulers at 812 S. Kingsley, 761-8314.

Tuesday afternoon as we were selling recall Hog Harvey bumper stickers we were confronted by one of Pig Krasny's dumber officers about soliciting without a permit when Bro. Ray told the pig that we did not need one and that he had no right to be fucking with us. The pig left and went to get some of his friends to assist him in making an arrest of someone half his size. He returned with five other pigs than he started getting very brave, talking kinda loud and boisterous. When we asked him for his badge number he said its 69, can you count that far? The pigs are always surprised that a brother can even count they try so hard to see that you don't get a decent education. After revealing only our name and address we started to quote to the pig exactly what he could do and the charge he was talking about was one that he could not applyin our case. He really flipped on that here was two niggers who knew more about the law that he was supposed to be enforcing (You Dig?) After some more of that racist inferal that all niggers are dumb and when he saw that we were not going for this bullshit he called up one of the super pigs from the station this motherfuckaa wouldn't even identify himself and snatched the stickers out of our hands, Right on fascists!! He then had the nerve to ask us if we wanted to ride down to the police station and talk it over we told him, "You have to come up with a better one than that! If you can't take us in under arrest we don't have nothing to talk about just give us back our stickers and get out of our way. You ought to be somewhere trying to find the murderer! When we come down to the police station to talk to you we are coming so that we can be sure that we are coming back out with no ass-kicking. Can you dig that? We know you always like to fight when you have five to one odds but we will choose our own grounds to fight on and when we strike we are going to wipe you out very thoroughly!!" They decided to leave because all kinds of witnesses started to gather around so this one pig who refused to identify himself (He had a suit on) started walking back to the pig headquarters, since he stole our bumper stickers we decided that we were going to go deal with that situation. This chickenshit Motherfucker started running from us. You dig? He seemed to know that he was about two carloads of pigs who tried to sneak up behind us and trick us into an ambush, but we did not fall for it.    RIGHT ON! ALL POWER TO THE PEOPLE! OFF THE PIG!!