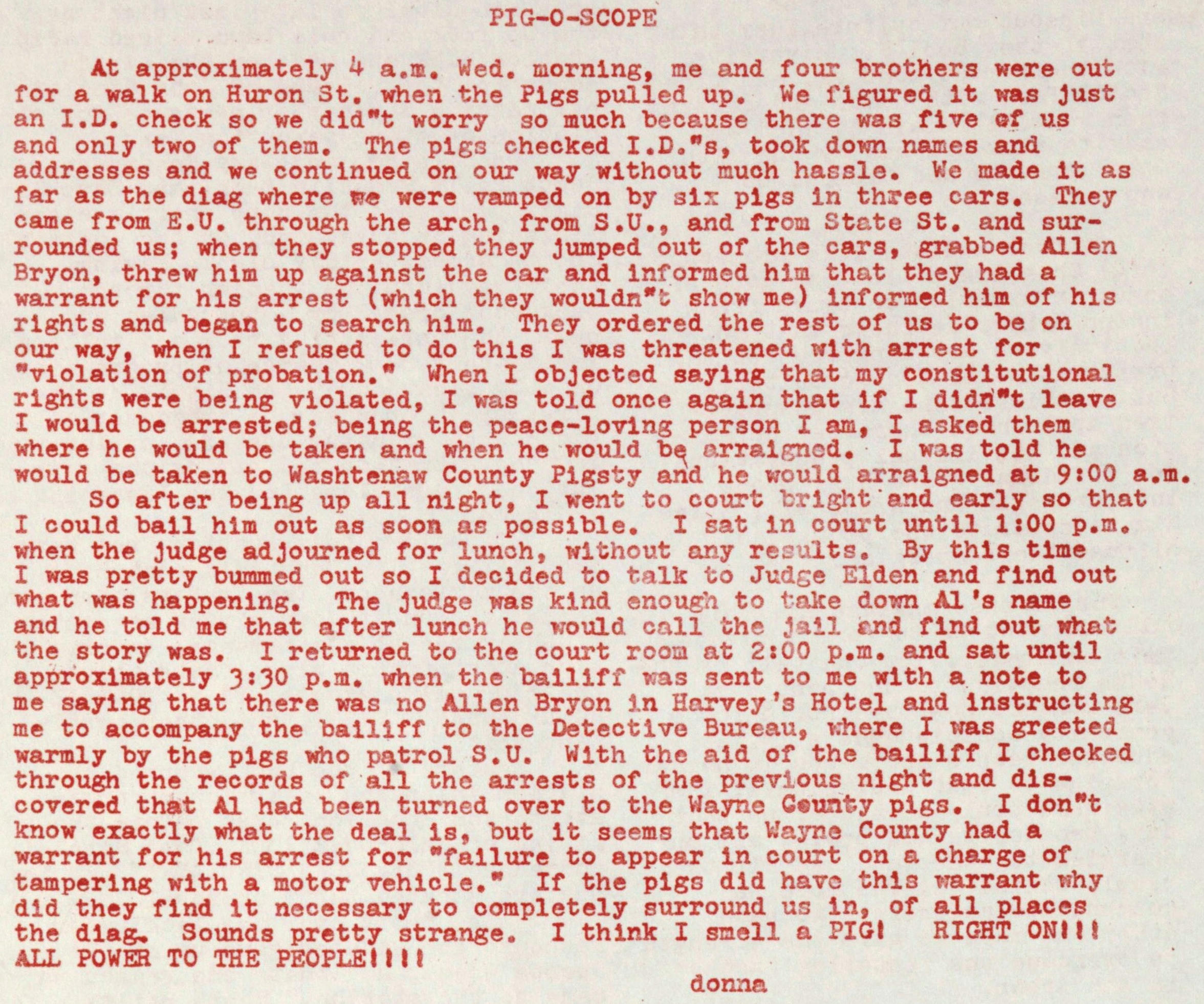 At approximately 4 a.n. Wed. morning, me and four brothers were out for a walk on Huron 3t. when the Plgs pulled up. We figured it was Just an I.D. check so we did"t worry so much because there was five Of us and only two of them. The plgs checked I.D. "e, took down names and addresses and we continued on our way without muoh hassle. We made lt as f ar as the dlag where w were vamped on by slr plgs in three cars. They came frorn E.U. through the arch, from S.U., and from State St. and surrounded us; when they stopped they Jumped out of the cars, grabbed Allen Bryon, threw him up against the car and informed hlm that they had a warrant for hls arrest (which they wouldnt show me) informed him of his rlghts and began to search him. They ordered the rest of us to be on our way, when I refused to do this I was threatened with arrest for "violation of probation." When I objected saying that my constltutional right8 were belng violated, I was told once again that if I didri"t leave I would be arrested; being the peace-loving person I am, I asked them where he would be taken and when he would be arraiftncd. I was told he would be taken to Washtenaw County Pigsty and he would arralgned at 900 a.m. So af ter being up all night, I went to court "brighfand early so that I could bail him out as soon as possible. I sat in oourt untll 1:00 p.m, when the Judge adjourned for lunoh, without any recults. By this time I was pretty bummed out so I decided to talk to Judge Elden and find out what was happening. The Judge was kind enoug'i to take down Al 's name and he told me that after lunch he would cali the jail md find out what the story was. I returned to the court room at 2:00 p.m. and sat until approximately 3:30 p.m. when the balliff was aent to me with a note to me saying that there was no Allen Bryon in Harvey's Hote?. and instructing me to accompany the bailiff to the Detective Bureau, :here I was greeted warmly by the pigs who patrol S.U. Wlth the aid of the balliff I checked through the records of all the arrests of the previous night and dlscovered that Al had been turned over to the Wayne Cunty pigs. I don"t know exactly what the deal is, but it seems that Wayne County had a warrant for his arrest for "f allure to appear in court on a charge of tamperlng with a motor vehicle." If the pigs did havo this warrant why did they find it necessary to oompletely surround us in, of all places the diag. Sounds pretty strange. I think I smell a PIGI RIGHT ONIIt ALL POWER TO THE PEOPLEI Ml