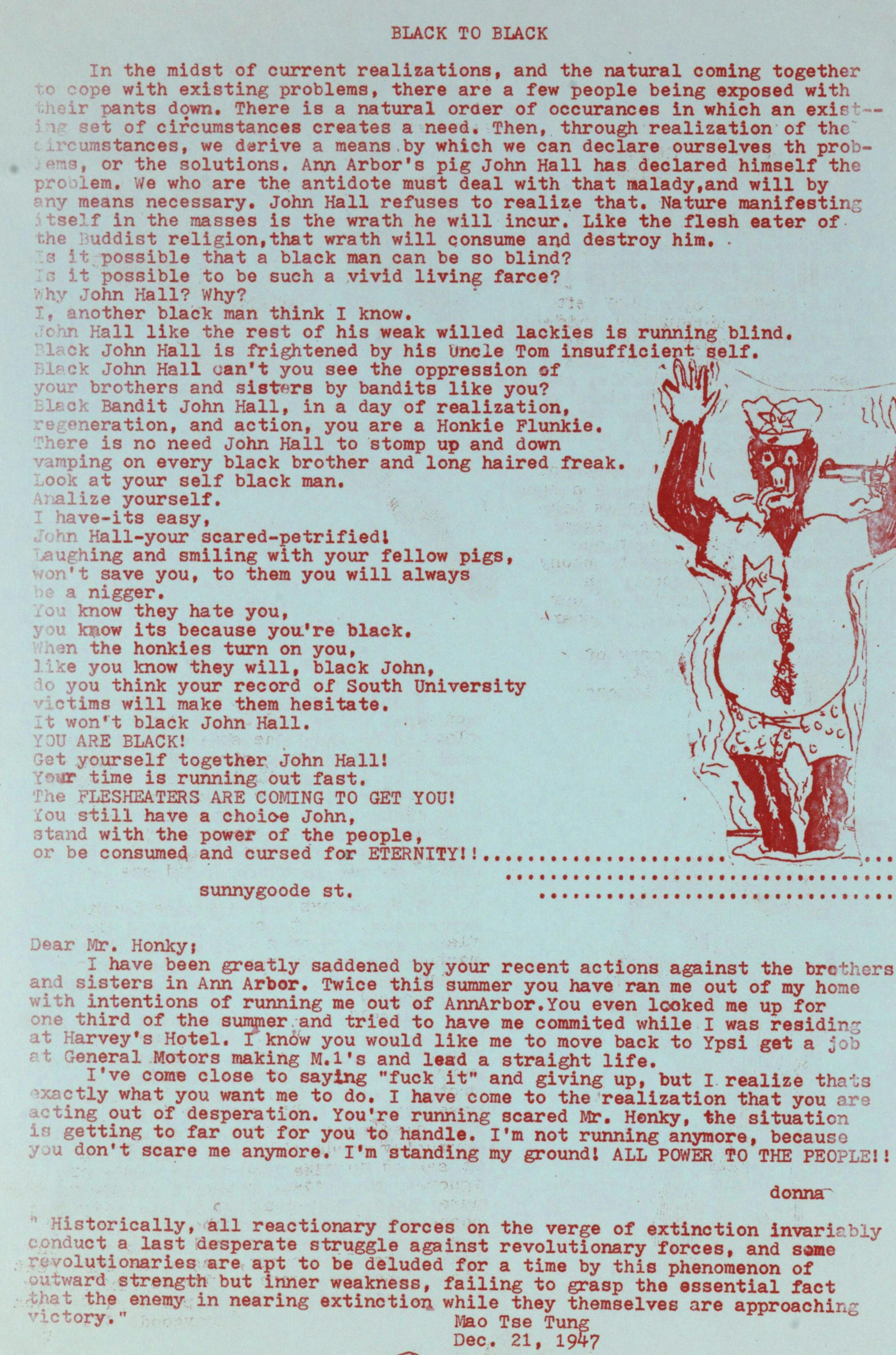 In the midst of current realizations, and the natural coming together ope with existing problema, there are a few people being exposed with oir pants down. There is a natural oraer of occurances in which an exir 3et of circumstances creates a need. Then, through realization of the umstances, we darive a means.by which we can declare ourselves th probi, or the solutions. Ann Arbor's pig John Hall has declared himself the pro iem. ve who are the antidote must deal with that malady,and will by y means necessary. John Hall refuses to realize that. Nature manifestin sef in the masses is the wrath he will incur. Like the flesh eater of f.he ; uddist religión, that wrath will consume and destroy him. . ' t possible that a black man can be so blind? lt possible to be such a vivid living farce? Why John Hall? Why? another black man think I know. Kall like the rest of his weak willed lackies is running blind. k John Hall is frightened by his Uncle Tom insufficient self. ck John Hall can't you see the oppression of rour brothers and sisters by bandits like you? Jk Bandit John Hall, in a day of realization, neration, and action, you are a Honkie Flunkie. :here is no need John Hall to stomp up and down ping on every black brother and long haired freak. ook at your self black man. alize yourself. ave-its easy, r Hall-your scared-petrifiedl .aughing and smiling with your fellow pigs, 't save you, to them you will always nigger. know they ha te you, know its because you.1 re black. n the honkies turn on you, e you know they will, black John, you think your record of South University tims will make them hesitate. won 't black John Hall. YOU ARE BLACK! Get yourself together John Hall! Yr time is running out fast. ie FLESHEATERS ARE COMING TO GET YOÜ! i ou still have a choio-e John, stand with the power of the people, or be consumed, and cursed for ETERNITYJ !...,.. sunnygoode st. . Dear Mr. Honkyj I have been greatly saddened by your recent actions against the brethers and sisters in Ann Arbor. Twice this summer you have ran me out of my home th intentions of running me out of AnnArbor.You even looked me up for one third of the summer and tried to have me commited while I was residir at Harveys Hotel, i knów you would like me to move back to Ypsi get a job "eneral Motors making M.l's and lead a straight life. I've come close to saylng "fuck it" and giving up, but I realize thai;s rxactly what you want me to do. I have come to the realization that you ars cting out of despera tion. You 're running scared Mr. Henky, the situation in getting to far out for you to handle. I'm not running anymore, becauso J don't scare me anymore. I'm standing my groundl ALL POWER TO THE PEOPLE! J donna" Historically, all reactionary f orces on the verge of extinction invariMy :.onduct a last desperate struggle against revolutionary f orces, and same volutionaries are apt to be deluded for a time by this phenomenon of outward strength but inner weakness, failing to grasp the essential fact that the enemy in nearing extinction while they themselves are atmroachin-ry." Mao Tse Tung Dec. 21, 1947