Ballad Of A Honky Bummer 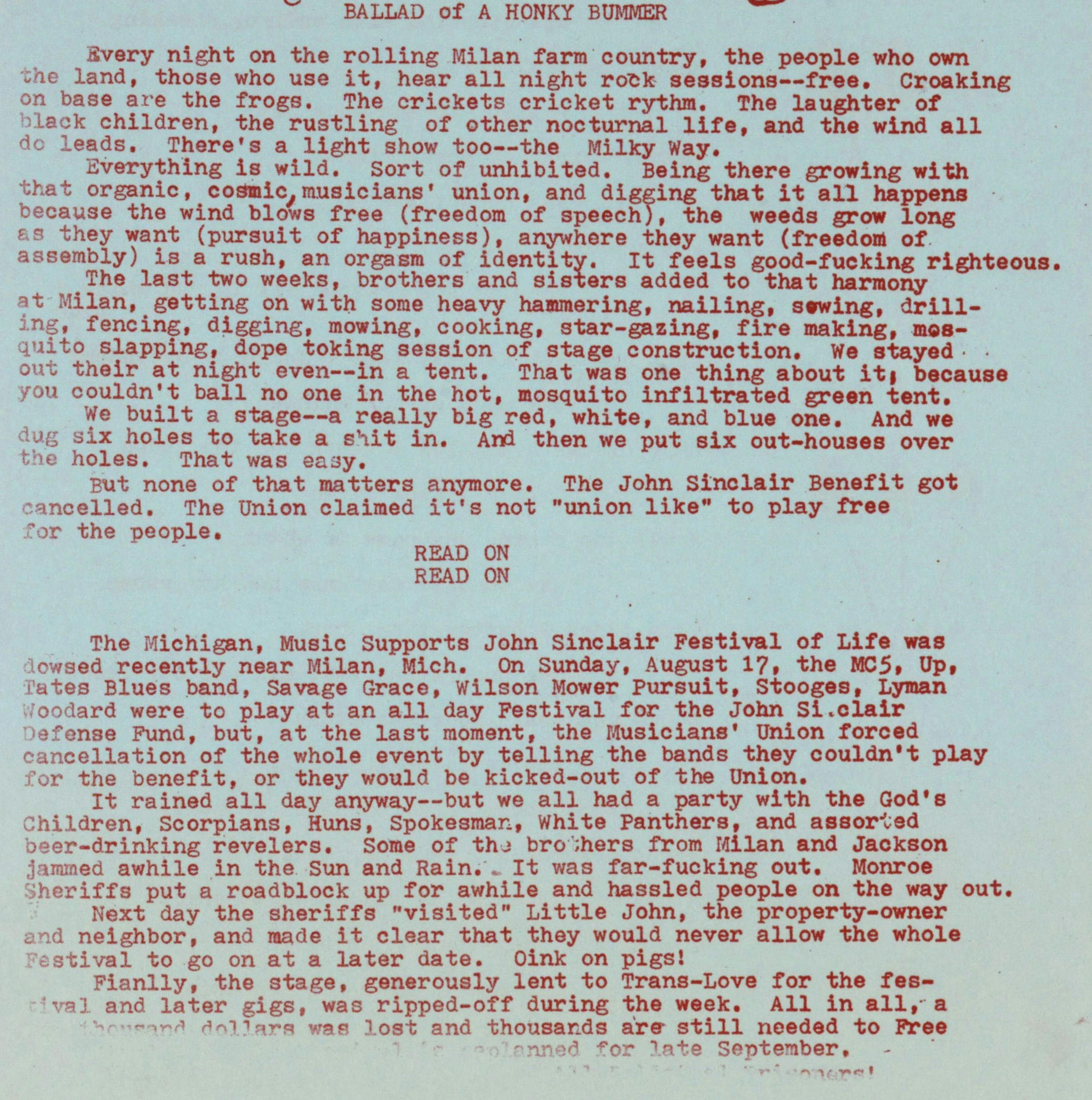 Svery night on the rolling Milan farm country, the people who own the land, those who use it, hear all night rock sessions - f ree. Croaking on base are the frogs. The crickets cricket rythm. The laughter of sck children, the rustling of other nocturnal Ufe, and the wind all de leads. There's a light show toothe Milky Way. Everything is wild. Sort of unhibited. Being there growing with that organic, cosmic, musicians' union, and digging that it all happens because the wind blows f ree (freedom of speech), the weeds grow long as they want (pursuit of happiness), anywhere they want (freedom of assembly) is a rush, an orgasm of identity. it feels good-fucking righteous. The last two weeks, brothers and sisters added to that harraony at Milan, getting on with some heavy hammering, nailing, stwing, drilling, fencing, digging, mowing, cooking, star-gazing, fire making, mosquito slapping, dope toking session of stage construction. We stayed out their at night even--in a tent. That was one thing about it because you couldn't ball no one in the hot, mosquito infiltrated green tent. We built a stage - a really big red, white, and blue one. And we dug six holes to take a shit in. And then we put six out-houses over the holes. That was easy. But none of that matters anymore. The John Sinclair Benefit got oancelled. The Union claimed it's not "union like" to play free r the people. READ ON READ ON The Michigan, Music Supports John Sinclair Festival of Life was -aed recently near Milan, Mich. On Sunday, August 1?, the MC5 üp, Ta tes Blues band, Savage Grace, Wilson Mower Pursuit, Stooges, Lyman oodard were to play at an all day Festival for the John Si.clair úfense Fund, but, at the last moment, the Musicians1 Union forced cancellation of the whole event by telling the bands they couldn't play for the benefit, or they would be kicked-out of the Union. It rained all day anyway - but we all had a party with the God's Ghildren, Scorpians, Huns, Spokesman, White Panthers, and assorted beer-drinking revelers. Some of thj bro ;hers from Milan and Jackson jammed awhile in the Sun and Rain. „ It was far-fucking out. Monroe eriffs put a roadblock up for awhile and hassled people on the way out. Next day the sheriffs "visited" Little John, the property-owner 1 neighbor, and made it clear that they would never allow the whole stival to go on at a later date. Oink on pigs! Fianlly, the stage, generously lent to Trans-Love for the fesIval and later gigs, was ripped-off during the week. All in all, a - dol Hará waf! lost and thousands are still needed to Free 3 -"or late September, ... i