This Is The Latest Report From The Front 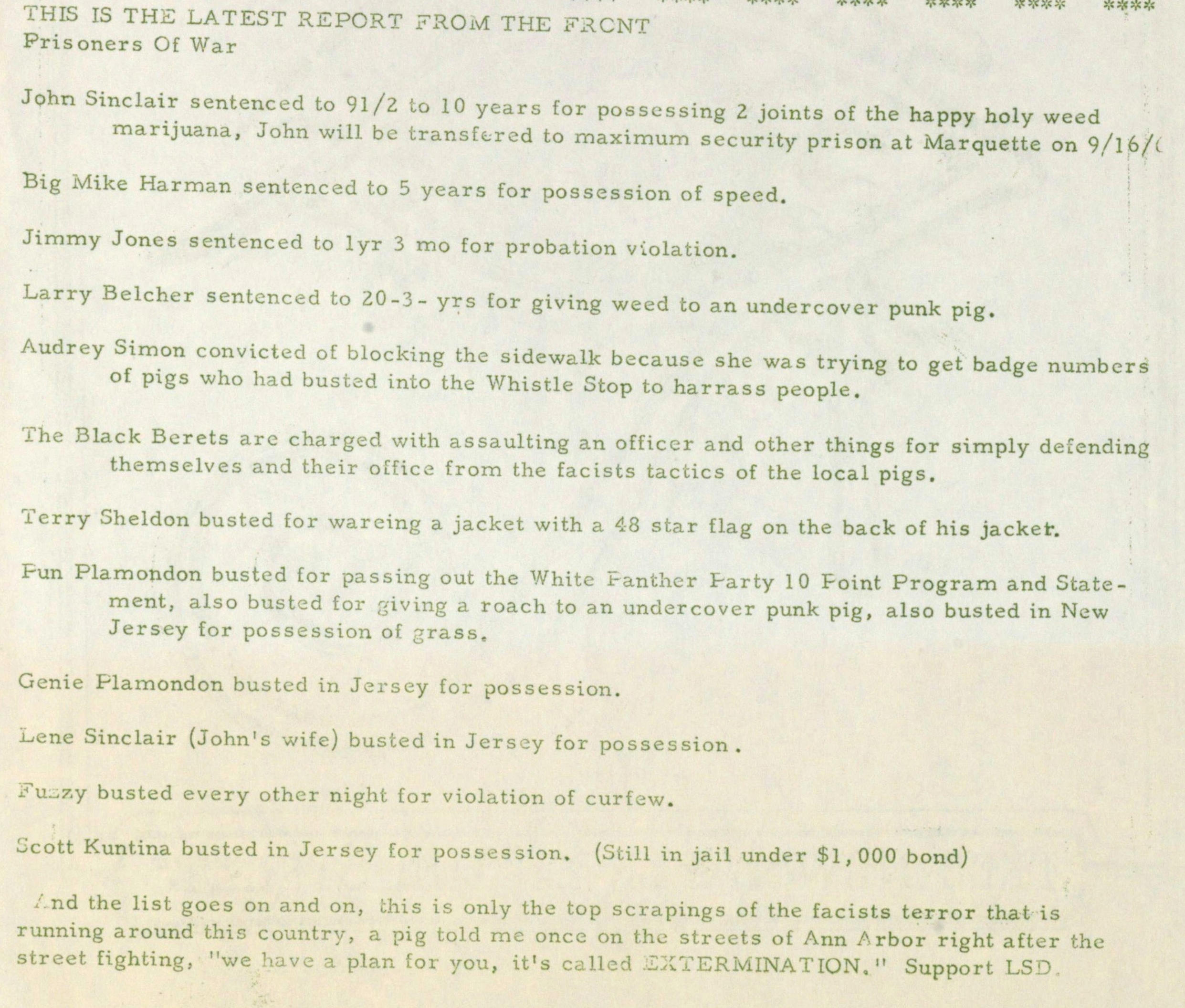 THIS IS THE LATEST REPORT FROM THE FRONT

John Sinclair sentenced to 9 1/2 to 10 years for possessing 2 joints of the happy holy weed marijuana, John will be transferred to maximum security prison at Marquette on 9/16/--

Big Mike Harman sentenced to 5 years for possession of speed.

Larry Belcher sentenced to 20-3-yrs for giving weed to an undercover punk pig.

Audrey Simon convicted of blocking the sidewalk because she was trying to get badge numbers of pigs who had busted into the Whistle Shop to harass people.

The Black Berets are charged with assaulting an officer and other things for simply defending themselves and their office from the fascist tactics of the local pigs.

Terry Sheldon busted for passing out the White Panther Party 10 Point Program and Statement, also busted for giving a roach to an undercover punk pig, also busted in New Jersey for possession of grass.

Fuzzy busted every other night for violation of curfew.

Scott Kuntina busted in Jersey for possession. (Still in jail under $1,000 bond)

And the list goes on and on, this is only the top scrapings of the fascists terror that is running around this country, a pig told me once on the streets of Ann Arbor right after the street fighting, "we have a plan for you, it's called EXTERMINATION." Support LSD.

Good old Marv. Marv is our man in Washington, at the Big House, "on the hill." Marv is a public servant, he will tell the Pres and the legislators what is on our mind and what we want.......Sooooo, lets tell Marv what it is we want.

We all want something, we should it all 'cause it's all ours.

I WANT JOHN SINCLAIR FREE FROM THE HANDS OF THE HONKIE PIG COPS & COURTS AND HIS SAFE PASSAGE BACK TO HIS PEOPLE, I WANT THE FREEDOM OF ALL MY PEOPLE! IT'S MINE BECAUSE IT'S THERE!

So lets let Marv know what the fuck is on our mind. He will be in Ann Arbor in Monday, Sept. 9 at 9 am, he has invited the people to come and talk with him, so lets turn his rhetoric around and go see him, and see what he has to say for himself.

POWER TO THE PEOPLE!