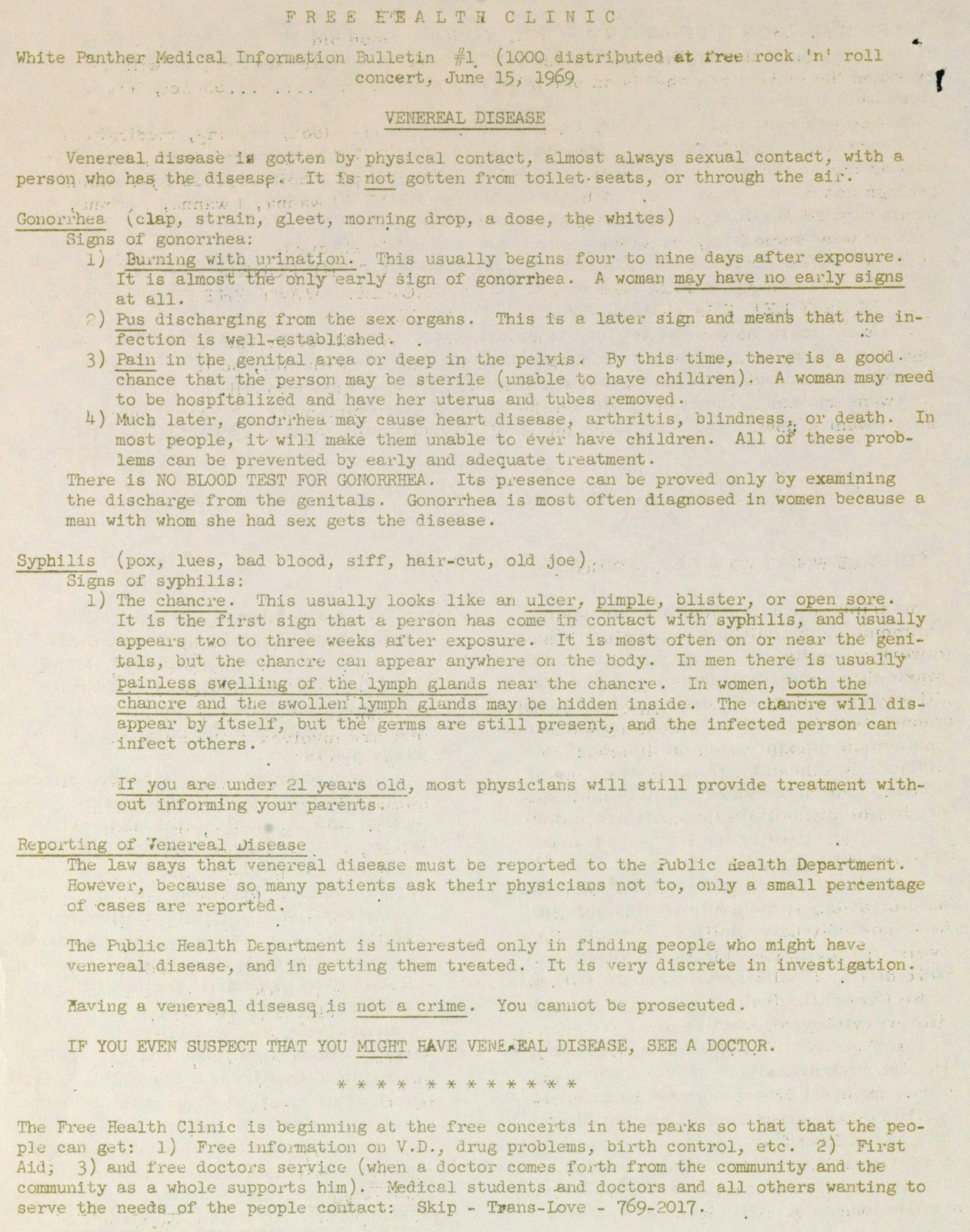 Venereal disease is gotten by physical contact, almost always sexual contact, with a person who has the disease. It is not gotten from toilet seats, or through the air.

1) Burning with urination. This usually begins four to nine days after exposure. It is almost the only early sign of gonorrhea. A woman may have no early signs at all.

2) Pus discharging from the sex organs. This is a later sign and means that the infection if well-established.

3) Pain in the genital area or deep in the pelvis. By this time, there is a good chance that the person may be sterile (unable to have children). A woman may need to be hospitalized and have her uterus and tubes removed.

4) Much later, gonorrhea may cause heart disease, arthritis, blindness, or death. In most people, it will make them unable to ever have children. All of these problems can be prevented by early and adequate treatment.

There is NO BLOOD TEST FOR GONORRHEA. Its presence can be proved only by examining the discharge from the genitals. Gonorrhea is most often diagnosed in women because a man with whom she had sex gets the disease.

1) The chancre. This usually looks like an ulcer, pimple, blister, or open sore. It is the first sign that a person has come in contact with syphilis, and usually appears two to three weeks after exposure. It is most often on or near the genitals, but the chancre can appear anywhere on the body. In men there is usually painless swelling of the lymph glands near the chancre. In women, both the cancer and the swollen lymph glands may be hidden inside. The chancre will disappear by itself, but the germs are still present, and the infected person can infect others.

If you are under 21 years old, most physicians will provide treatment without informing your parents.

The law says that venereal disease must be reported to the Public Health Department. However, because so many patients ask their physicians not to, only a small percentage of cases are reported.

The Public Health Department is interested only in finding people who might have venereal disease, and in getting them treated. It is very discrete in investigation.

Having a venereal disease is not a crime. You cannot be prosecuted.

IF YOU EVEN SUSPECT THAT YOU MIGHT HAVE VENEREAL DISEASE, SEE A DOCTOR.

The Free Health Clinic is beginning at the free concerts in the parks so that the people can get: 1) Free information on V.D., drug problems, birth control, etc. 2) First Aid; 3) and free doctors service (when a doctor comes forth from the community and the community as a whole supports him). Medical students and doctors and all others wanting to serve the needs of the people contact: Skip - Trans-Love - 769-2017