Politics To The Pop Stars! 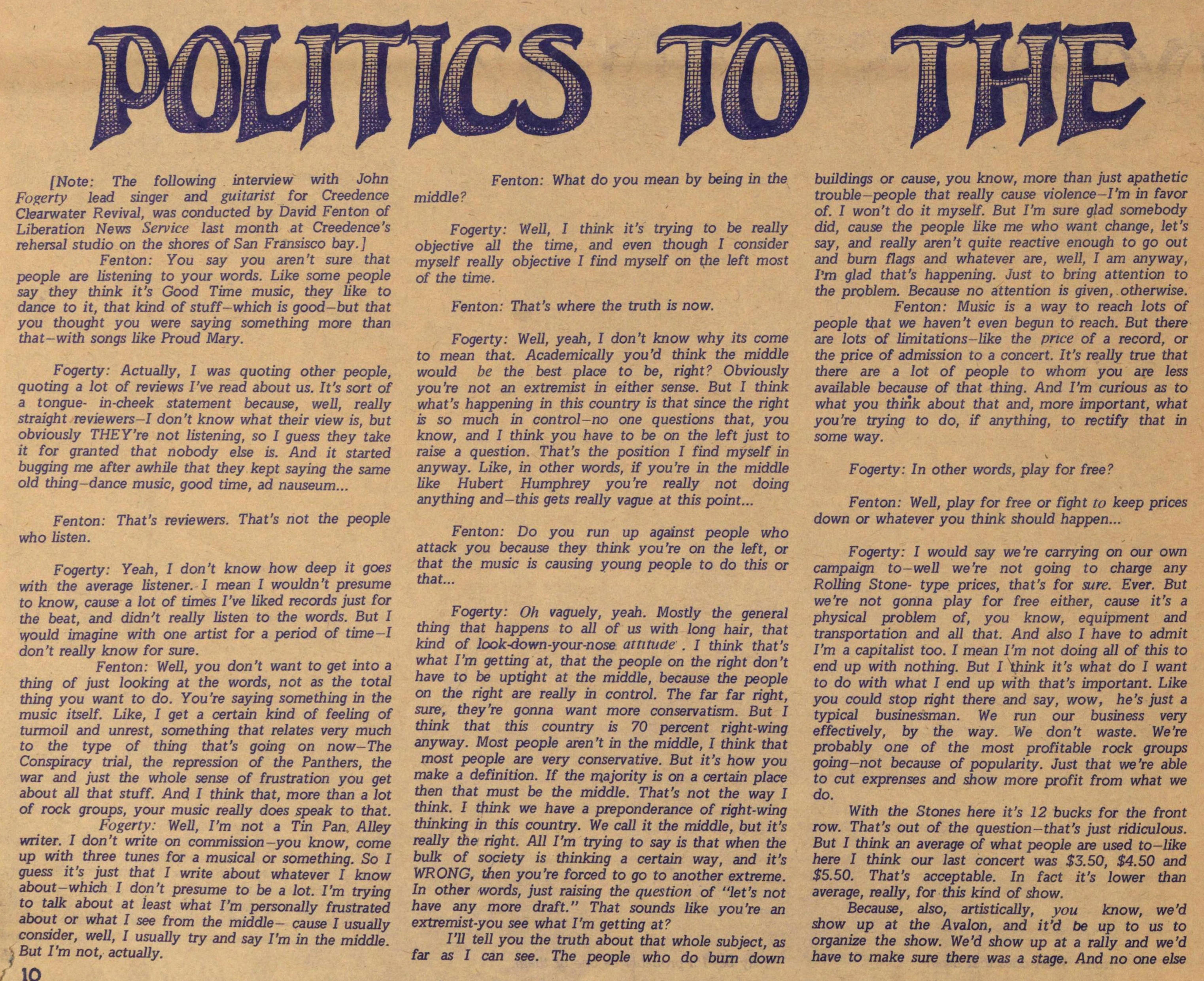 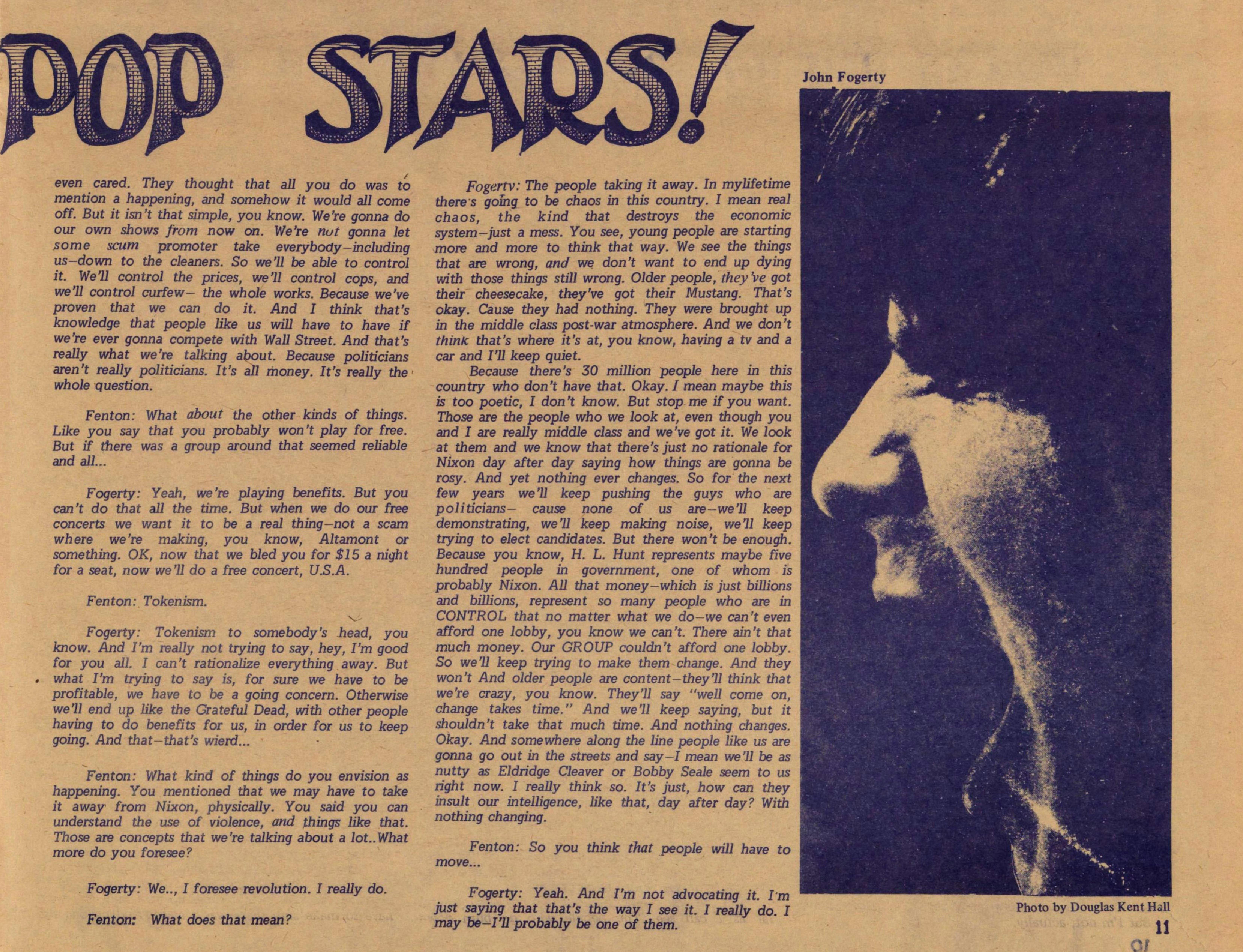 POLITICS TO THE POP STARS!

Fenton: You say you aren't sure that people are listening to your words. Like some people say they think it's Good Time music, they like to dance to it, that kind of stuff-which is good-but that you thought you were saying something more than that-with songs like Proud Mary.

Fogerty: Actually, I was quoting other people, quoting a lot of reviews I've read about us. It's sort of a in-cheek statement because, well, really straight reviewers-I don't know what their view is, but obviously THEY 're not listening, so I guess they take it for granted that nobody else is. And it started bugging me after awhile that they kept saying the same old thing-dance music, good time, ad nauseum...

Fenton: That's reviewers. That's not the people who listen.

Fogerty: Yeah, I don't know how deep it goes with the average listener. I mean I wouldn't presume to know, cause a lot of times I've liked records just for the beat, and didn't really listen to the words. But I would imagine with one artist for a period of time-I don 't really know for sure.

Fenton: Well, you don't want to get into a thing of just looking at the words, not as the total thing you want to do. You're saying something in the music itself. Like, I get a certain kind of feeling of turmoil and unrest, something that relates very much to the type of thing that's going on now-The Conspiracy trial, the repression of the Panthers, the war and just the whole sense of frustration you get about all that stuff. And I think that, more than a lot of rock groups, your music really does speak to that.

Fogerty: Well, I'm not a Tin Pan Alley writer. I don't write on commission-you know, come up with three tunes for a musical or something. So I guess it's just that I write about whatever I know about which I don't presume to be a lot. I'm trying to talk about at least what I'm personally frustrated about or what I see from the middle- cause I usually consider, well, I usually try and say I'm in the middle. But I'm not, actually.

Fenton: What do you mean by being in the middle?

Fenton: That's where the truth is now.

Fogerty: Well, yeah, I don't know why its come to mean that. Academically you'd think the middle would be the best place to be, right? Obviously you're not an extremist in either sense. But I think what's happening in this country is that since the right is so much in control-no one questions that, you know, and I think you have to be on the left just to raise a question. That's the position I find myself in anyway. Like, in other words, if you're in the middle like Hubert Humphrey you're really not doing anything and-this gets really vague at this point...

Fenton: Do you run up against people who attack you because they think you're on the left, or that the music is causing young people to do this or that...

Fogerty: Oh vaguely, yeah. Mostly the general thing that happens to all of us with long hair, that kind of lookdown-your-nose attitude. I think that's what I'm getting at, that the people on the right don't have to be uptight at the middle, because the people on the right are really in control. The far far right, sure, they're gonna want more conservatism. But I think that this country is 70 percent right-wing anyway. Most people aren't in the middle, I think that most people are very conservative. But it's how you make a definition. If the majority is on a certain place then that must be the middle. That's not the way I think. I think we have a preponderance of right-wing thinking in this country. We call it the middle, but it's really the right. All I'm trying to say is that when the bulk of society is thinking a certain way, and it's WRONG, then you're forced to go to another extreme. In other words, just raising the question of "let's not have any more draft." That sounds like you're an extremist-you see what I'm getting at?

I'll tell you the truth about that whole subject, as far as I can see. The people who do burn down buildings or cause, you know, more than just apathetic trouble-people that really cause violence-I'm in favor of. I won't do it myself. But I'm sure glad somebody did, cause the people like me who want change, let's say, and really aren't quite reactive enough to go out and burn flags and whatever are, well, I am anyway, I'm glad that's happening. Just to bring attention to the problem. Because no attention is given, otherwise.

Fenton: Music is a way to reach lots of people that we haven't even begun to reach. But there are lots of imitations-like the price of a record, or the price of admission to a concert. It's really true that there are a lot of people to whom you are less available because of that thing. And I'm curious as to what you think about that and, more important, what you're trying to do, if anything, to rectify that in some way

Fogerty: In other words, play for free?

Fenton: Well, play for free or fight to keep prices down or whatever you think should happen...

Fogerty: I would say we're carrying on our own campaign to-well we're not going to charge any Rolling Stone type prices, that's for sure. Ever. But we're not gonna play for free either, cause it's a physical problem of, you know, equipment and transportation and all that. And also I have to admit I'm a capitalist too. I mean I'm not doing all of this to end up with nothing. But I think it's what do I want to do with what I end up with that's important. Like you could stop right there and say, wow, he's just a typical businessman. We run our business very effectively, by the way. We don't waste. We're probably one of the most profitable rock groups going-not because of popularity. Just that we're able to cut expenses and show more profit from what we do.

With the Stones here it's 12 bucks for the front row. That's out of the question-that's just ridiculous. But I think an average of what people are used to-like here I think our last concert was $3.50, $4.50 and $5.50. That's acceptable. In fact it's lower than average, really, for this kind of show.

Because, also, artistically, you know, we'd show up at the Avalon, and it'd be up to us to organize the show. We'd show up at a rally and we'd have to make sure there was a stage. And no one else even cared. They thought that all you do was to mention a happening, and somehow it would all come off. But it isn't that simple, you know. We're gonna do our own shows from now on. We're not gonna let some scum promoter take everybody-including us-down to the cleaners. So we'll be able to control it. We'll control the prices, we'll control cops, and we'll control the whole works. Because we've proven that we can do it. And I think that 's knowledge that people like us will have to have if we're ever gonna compete with Wall Street. And that's really what we're talking about. Because politicians aren't really politicians. It's all money. It's really the whole question.

Fenton: What about the other kinds of things. Like you say that you probably won't play for free. But if there was a group around that seemed reliable and all...

Fogerty: Yeah, we're playing benefits. But you can't do that all the time. But when we do our free concerts we want it to be a real thing-not a scam where we're making, you know, Altamont or something. OK, now that we bled you for $15 a night for a seat, now we'll do a free concert, U.S.A

Fogerty: Tokenism to somebody's head, you know. And I'm really not trying to say, hey, I'm good for you all. I can't rationalize everything away. But what I'm trying to say is, for sure we have to be profitable, we have to be a going concern. Otherwise we'll end up like the Grateful Dead, with other people having to do benefits for us, in order for us to keep going. And that-that's weird...

Fenton: What kind of things do you envision as happening. You mentioned that we may have to take it away from Nixon, physically. You said you can understand the use of violence, and things like that. Those are concepts that we're talking about a lot. What more do you foresee?

Fogerty: We.., I foresee revolution. I really do.

Fenton: What does that mean?

Fogertv: The people taking it away. In my lifetime there's going to be chaos in this country. I mean real chaos, the kind that destroys the economic system-just a mess. You see, young people are starting more and more to think that way. We see the things that are wrong, and we don't want to end up dying with those things still wrong. Older people, they 've got their cheesecake, they've got their Mustang. That's okay. Cause they had nothing. They were brought up in the middle class post-war atmosphere. And we don't think that's where it's at, you know, having a tv and a car and I'll keep quiet.

Because there's 30 million people here in this country who don't have that. Okay. I mean maybe this is too poetic, I don't know. But stop me if you want. Those are the people who we look at, even though you and I are really middle class and we've got it. We look at them and we know that there's just no rationale for Nixon day after day saying how things are gonna be rosy. And yet nothing ever changes. So for the next few years we'll keep pushing the guys who are politicians- cause none of us are-we'll keep demonstrating, we'll keep making noise, we'll keep trying to elect candidates. But there won't be enough. Because you know, H. L. Hunt represents maybe five hundred people in government, one of whom is probably Nixon. All that money-which is just billions and billions, represent so many people who are in CONTROL that no matter what we do-we can't even afford one lobby, you know we can't. There ain't that much money. Our GROUP couldn't afford one lobby. So we'll keep trying to make them change. And they won't  And older people are content-they'll think that we're crazy, you know. They'll say "well come on, change takes time." And we'll keep saying, but it shouldn't take that much time. And nothing changes. Okay. And somewhere along the line people like us are gonna go out in the streets and say-I mean we'll be as nutty as Eldridge Cleaver or Bobby Seale seem to us right now. I really think so. It's just, how can they insult our intelligence, like that, day after day? With nothing changing.

Fenton: So you think that people will have to move...

Fogerty: Yeah. And I'm not advocating it. l'm just saying that that's the way I see it. I really do. I may be-I'll probably be one of them.