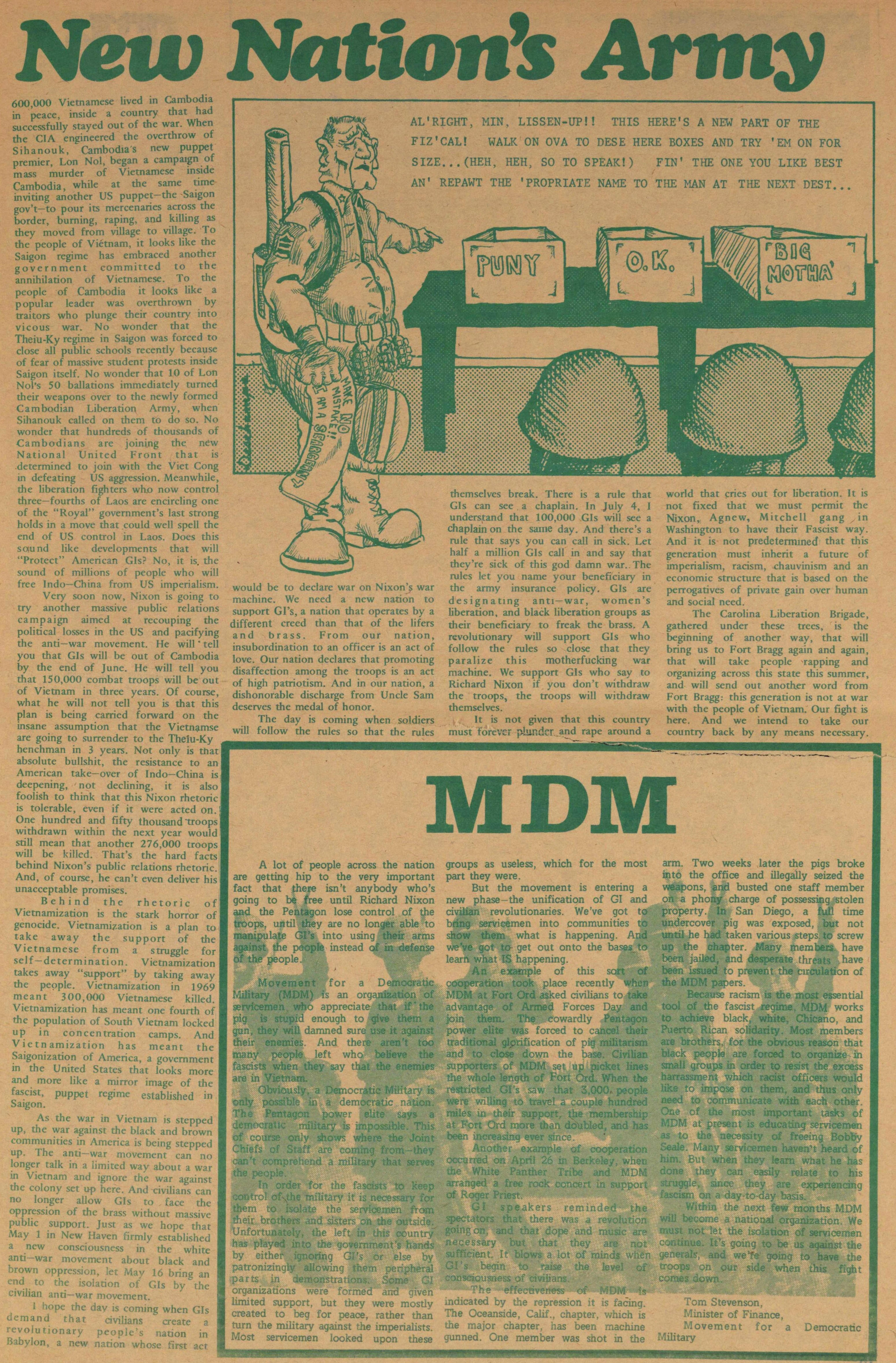 [Note: The following is the transcript of a speech given Armed Forces Day at Fort Bragg, South Carolina, reworked by the author, who was one of the Conspiracy 8.]

Ten miles from here the generals wring their hands in worry because their Armed Forces Day had to be called off. They are sick to their stomachs because their phantom jets can't fly overhead. The brass and lifers are furious that they can't celebrate themselves today that the patriotic praise of the red neck civilians can't reach their ears. No American Legion is here to "support" GIs. The DAR didn't make their annual appearance today. And, it's all because old-fashion/support from fascists and fools has been changed over and comes now from Agnew's favorite people-the bums, the outlaws, the punks, the revolutionaries and the criminally insane. Today marks the end of a practice of Gl support from organizations that cheer mindlessly to see soldiers fight and die in a senseless war 10,000 miles away. We have another message today: The only relevant GI support is from people who organize around the demand for unilateral, unconditional and immediate withdrawal of all troops from South East Asia.

A lot of different people have come together this afternoon in Fayettesville. But l want to talk primarily with the trainees who are here among us. Since the military works its ass off to keep the news out of your reach, since TV is not too regular where you are and since the underground GI papers that run the truth are kept out of drill exercises, I want to say a few words on what's been happening in South East Asia in the past two weeks.

I don't suggest if you had seen the tube last week the government would have answered your questions. When Agnew carne on a national talk show recently to claim victory in Cambodia, he pointed out that the American invasion force had just uncovered a large Viet Cong facility for laundering uniforms. Agnew's such a fool, he probably thinks that the Viet Cong will lay down their arms if they don't have pressed uniforms. And Nixon came on television to say the US went into Cambodia to get the headquarters of the Viet Cong- what they call the Central office of South Vietnam. The Vietnam veterans who are here may recall that there was an earlier military battle called "Operation Junction City." And that that plan called for the same goal. Lyndon Johnson decided to get all the VC leadership as a way to end the war, so the brass flew 20,000 troops around Tay Ninh to encircle the "headquarters." Everyone zips into a large jungle area to form this gigantic circle around an imaginary organizational center. Not only did the brass not find any headquarters, but the Vietnamese mobilized all the self-defense guerrillas at the village level and surrounded the 20,000 man circle. The defeat was humiliating, but the Pentagon just declared Junction City a great victory and then quietly dumped the operation's commander. Now these fools are back again, with another "get the leadership" theory.

But the most insane explanation of all that has been given for the US military to run crazy across the rubber plantations of Cambodia is that this aggression will "protect" American GIs. In fact, just the reverse has happened. Before Cambodia GIs faced orders to shoot down South Vietnamese fighting for their independence. Now, because of the Cambodian invasion and other acts of military escalation, Nixon has created a situation where American soldiers face the combined strength of South Vietnamese, Cambodians, Laotians and North Vietnamese troops. In saying he was going to root out a sanctuary in Cambodia, Nixon has made the battle field all of Indo-China in which China is the new sanctuary.

Look at what's happened in Cambodia. Under Prince Sihanouk, 600,000 Vietnamese lived in Cambodia in peace, inside a country that had successfully stayed out of the war. When the CIA engineered the overthrow of Sihanouk, Cambodia's new puppet premier, Lon Nol, began a campaign of mass murder of Vietnamese inside Cambodia, while at the same time inviting another US puppet-the Saigon gov't- to pour its mercenaries across the border, burning, raping, and killing as they moved from village to village. To the people of Vietnam, it looks like the Saigon regime has embraced another government committed to the annihilation of Vietnamese. To the people of Cambodia it looks like a popular leader was overthrown by traitors who plunge their country into vicious war. No wonder that the Theiu-Ky regime in Saigon was forced to close all public schools recently because of fear of massive student protests inside Saigon itself. No wonder that 10 of Lon Nol's 50 battalions immediately turned their weapons over to the newly formed Cambodian Liberation Army, when Sihanouk called on them to do so. No wonder that hundreds of thousands of Cambodians are joining the new National United Front that is determined to join with the Viet Cong in defeating US aggression. Meanwhile, the liberation fighters who now control three-fourths of Laos are encircling one of the "Royal" government's last strong holds in a move that could well spell the end of US control in Laos. Does this sound like developments that will "Protect" American GIs? No, it is the sound of millions of people who will free Indo-China from US imperialism.

Very soon now, Nixon is going to try another massive public relations campaign aimed at recouping the political losses in the US and pacifying the anti-war movement. He will tell you that GIs will be out of Cambodia by the end of June. He will tell you that 150,000 combat troops will be out of Vietnam in three years. Of course, what he will not tell you is that this plan is being carried forward on the insane assumption that the Vietnamese are going to surrender to the Theiu-Ky henchman in 3 years. Not only is that absolute bullshit, the resistance to an American take- over of Indo-China is deepening, not declining, it is also foolish to think that this Nixon rhetoric is tolerable, even if it were acted on. One hundred and fifty thousand troops withdrawn within the next year would still mean that another 276,000 troops will be killed. That's the hard facts behind Nixon's public relations rhetoric. And, of course, he can't even deliver his unacceptable promises.

As the war in Vietnam is stepped up, the war against the black and brown communities in America is being stepped up. The anti-war movement can no longer talk in a limited way about a war in Vietnam and ignore the war against the colony set up here. And civilians can no longer allow GIs to face the oppression of the brass without massive public support. Just as we hope that May 1 in New Haven firmly established a new consciousness in the white anti-war movement about black and brown oppression, let May 16 bring an end to the isolation of GIs by the civilian anti-war movement.

I hope the day is coming when GIs demand that civilians create a revolutionary people's nation in Babylon, a new nation whose first act would be to declare war on Nixon's war machine. We need a new nation to support GI's, a nation that operates by a different creed than that of the lifers and brass. From our nation, insubordination to an officer is an act of love. Our nation declares that promoting disaffection among the troops is an act of high patriotism. And in our nation, a dishonorable discharge from Uncle Sam deserves the medal of honor.

The day is coming when soldiers will follow the rules so that the rules themselves break. There is a rule that GIs can see a chaplain. In July 4, I understand that 100,000 GIs will see a chaplain on the same day. And there's a rule that says you can call in sick. Let half a million GIs call in and say that they're sick of this god damn war. The rules let you name your beneficiary in the army insurance policy. GIs are designating anti-war, women's liberation, and black liberation groups as their beneficiary to freak the brass. A revolutionary will support GIs who follow the rules so close that they paralyze this motherfucking war machine. We support GIs who say to Richard Nixon if you don't withdraw the troops, the troops will withdraw themselves.

It is not given that this country must forever plunder and rape around a world that cries out for liberation. It is not fixed that we must permit the Nixon, Agnew, Mitchell gang in Washington to have their Fascist way. And it is not predetermined that this generation must inherit a future of imperialism, racism, chauvinism and an economic structure that is based on the perogatives of private gain over human and social need. The Carolina Liberation Brigade, gathered under these trees, is the beginning of another way, that will bring us to Fort Bragg again and again, that will take people rapping and organizing across this state this summer, and will send out another word from Fort Bragg: this generation is not at war with the people of Vietnam. Our fight is here. And we intend to take our country back by any means necessary.

(Political Cartoon) AL'RIGHT, MIN, LISSEN-UP!! THIS HERE'S A NEW PART OF THE FIZ'CAL! WALK ON OVA TO DESE HERE BOXES AND TRY 'EM ON FOR SIZE...(HEH, HEH, SO TO SPEAK!) FIN' THE ONE YOU LIKE BEST AN' REPAWT THE 'PROPRIATE NAME TO THE MAN AT THE NEXT DEST...