The Hopes & Dreams Of A Nation 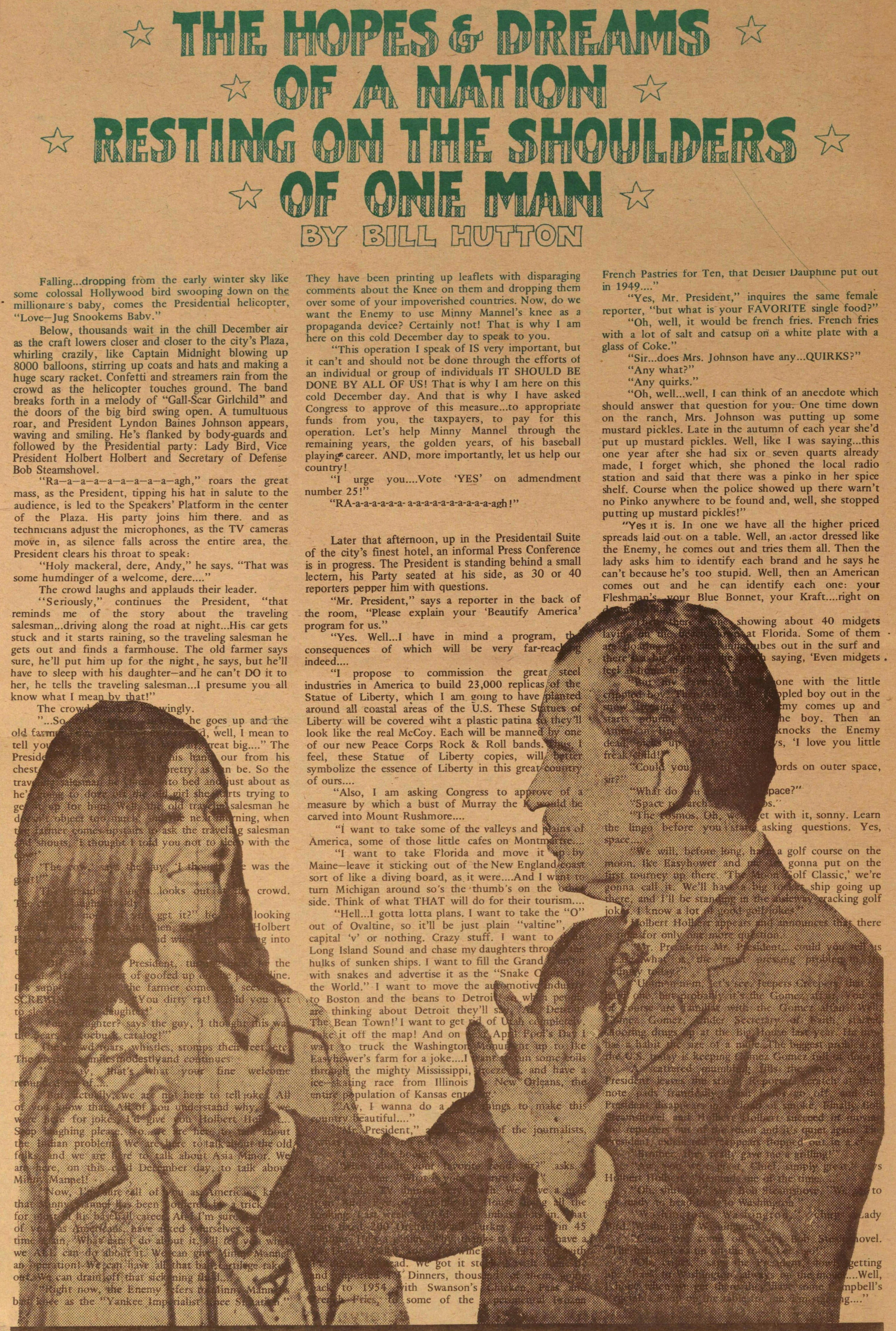 Falling...dropping from the early winter sky like some colossal Hollywood bird swooping down on the millionaire's baby, comes the Presidential helicopter, "Love-Jug Snookems Baby."

Below, thousands wait in the chill December air as the craft lowers closer and closer to the city's Plaza, whirling crazily, like Captain Midnight blowing up 8000 balloons, stirring up coats and hats and making a huge scary racket. Confetti and streamers rain from the crowd as the helicopter touches ground. The band breaks forth in a melody of "Gall-Scar Girlchild" and the doors of the big bird swing open. A tumultuous roar, and President Lyndon Baines Johnson appears, waving and smiling. He's flanked by body-guards and followed by the Presidential party: Lady Bird, Vice President Holbert Holbert and Secretary of Defense Bob Steamshovel.

"Ra- a- a- a- a- a- a- a- a- agh," roars the great mass, as the President, tipping his hat in salute to the audience, is led to the Speakers' Platform in the center of the Plaza. His party joins him there. And as technicians adjust the microphones, as the TV cameras move in, as silence falls across the entire area, the President clears his throat to speak:

The crowd laughs and applauds their leader.

"...So [...] he goes up and the old farmer [...] and, well, I meant to tell you [...] great big...." The President [...] his hand our [sic] from his chest [...] pretty as can be. So the traveling salesman he goes [?] to bed and just about as he's going to doze off the old girl she starts trying to get it up for him! Well, the old travelling salesman he doesn't object too much, and the next morning, when the farmer comes upstairs to ask the traveling salesman and shouts, 'I thought I told you not to sleep with the [...].

"Seriously, that's what your fine welcome reminded me of..."

"Now, I'm sure all of you as Americans know that Minny Mannel has been [...] a trick for mostly his baseball career. And I'm sure of [...] as Americans, have asked yourselves time and time again, 'What can I do about.' I'll tell you what we ALL can do about it. We can give Minny Mannel an operation! We can have all that bad [?] cartilege taken out. We can drain off that sickening fluid [?] ...

They have been printing up leaflets with disparaging comments about the Knee on them and dropping them over some of your impoverished countries. Now, do we want the Enemy to use Minny Mannel's knee as a propaganda device? Certainly not! That is why I am here on this cold December day to speak to you.

"This operation I speak of IS very important, but it can't and should not be done through the efforts of an individual or group of individuals. IT SHOULD BE DONE BY ALL OF US! That is why I am here on this cold December day. And that is why I have asked Congress to approve of this measure...to appropriate funds from you, the taxpayers, to pay for this operation. Let's help Minny Mannel through the remaining years, the golden years, of his baseball playing career. AND, more importantly, let us help our country!

Later that afternoon, up in the Presidental Suite of the city's finest hotel, an informal Press Conference is in progress. The President is standing behind a small lectern, his Party seated at his side, as 30 or 40 reporters pepper him with questions.

"Mr. President," says a reporter in the back of the room, "Please explain your 'Beautify America' program for us."

"Yes. Well...I have in mind a program, the consequences of which will be very far-reaching indeed...

"I propose to commission the great steel industries in America to build 23,000 replicas of the Statue of Liberty, which I am going to have planted around all coastal areas of the U.S. These Statues of Liberty will be covered with a plastic patina they'll look like the real McCoy. Each will be manned by one of our new Peace Corps Rock & Roll bands. Thus, I feel, these Statue of Liberty copies, will better symbolize the essence of Liberty in this great country of ours...

"Also, I am asking Congress to approve of a measure by which a bust of Murray the K would be carved into Mount Rushmore...

"I want to take some of the valleys and plains of America, some of those little cafes on Montmarme...

"I want to take Florida and move it up by Maine - leave it sticking out of the New England Coast sort of like a diving board, as it were....And I want to turn Michigan around so's the thumb's on the other side. Think of what THAT will do for their tourism...

"Hell...I gotta lotta plans. I want to take the 'O' out of Ovaltine, so it'll be just plain 'valtine,' no capital 'v' or nothing. Crazy stuff. I want to [...] Long lsland Sound and chase my daughters through the hulks of sunken ships. I want to fill the Grand Canyon with snakes and advertise it as the 'Snake [...] of the World.' I want to move the automotive industry to Boston and the beans to Detroit, so when people are thinking about Detroit they'll say, 'Ah, Detroit! The Bean Town!' I want to get rid of Utah completely. Take it off the map! And on next April Fool's Day I want to truck the Washington Monument up to Ike Easyhower's farm for a joke...I want to run some coils through the mighty Mississippi, freeze it and have a ice-skating race from Illinois to New Orleans, the entire population of Kansas entering.

"Aw, I wanna do a lot of things to make this country beautiful..."

"Yes, Mr. President," inquires the same female reporter, "but what is your FAVORITE single food?"

"Oh, well, it would be french fries. French fries with a lot of salt and catsup on a white plate with a glass of Coke."

"Oh, well...well, I can think of an anecdote which should answer that question for you. One time down on the ranch, Mrs. Johnson was putting up some mustard pickles. Late in the autumn of each year she'd put up mustard pickles. Well, like I was saying...this one year after she had six or seven quarts already made, I forget which, she phoned the local radio station and said that there was a pinko in her spice shelf. Course when the police showed up there warn't no Pinko anywhere to be found and, well, she stopped putting up mustard pickles!"

"Yes it is. In one we have all the higher priced spreads laid out on a table. Well, an actor dressed like the Enemy, he comes out and tries them all. Then the lady asks him to identify each brand and he says he can't because he's too stupid. Well, then an American comes out and he can identify each one: your Fleshman's, your Blue Bonnet, your Kraft....right on [...]

Then there's one showing about 40 midgets laying on the beach [...] at Florida. Some of them are floating in the innertubes out in the surf and there are big [...] saying, "Even midgets feel is home in the [...]

"The cosmos, oh, well get with it, sonny. Learn the lingo before you start asking questions. Yes, space...

"We will, before long, have a golf course on the moon, like Easyhower and me are gonna put on the first tourney up there. 'The Moon Golf Classic,' we're gonna call it. We'll have a big rocket ship going up there and I'll be standing in the [...] cracking golf jokes. I know a lot of good golf jokes."

Holbert Holbert appears and announces that there is time [?] for only one more question.

"Mr. President, Mr. President...could you tell us please what is the most pressing problem in [...] today?"