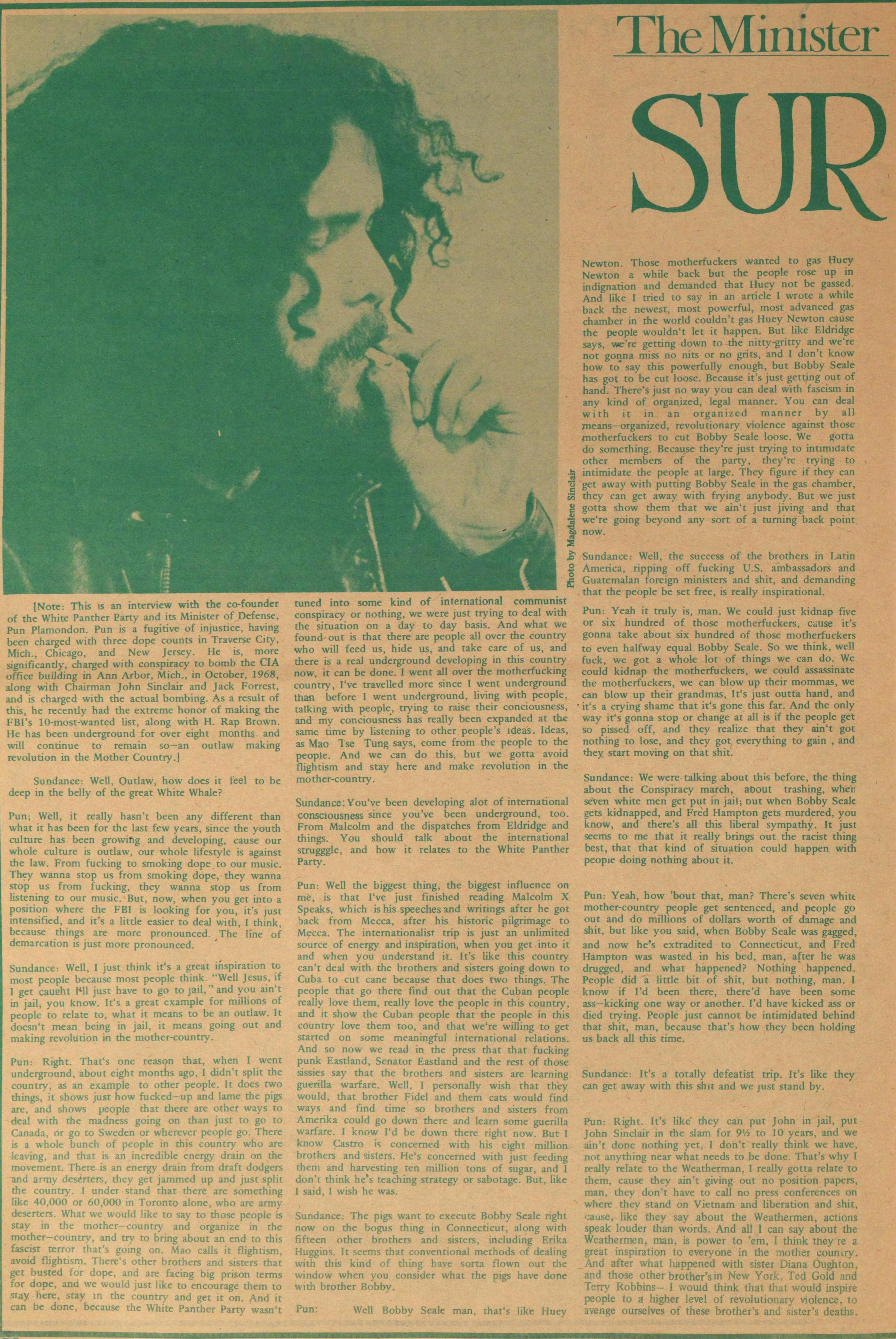 [Note: This is an interview with the co-founder of the White Panther Party and its Minister of Defense, Pun Plamondon. Pun is a fugitive of injustice, having been charged with three dope counts in Traverse City, Mich., Chicago, and New Jersey. He is, more significantly, charged with conspiracy to bomb the CIA office building in Ann Arbor, Mich., in October, 1968, along with Chairman John Sinclair and Jack Forrest, and is charged with the actual bombing. As a result of this, he recently had the extreme honor of making the FBI's 10-most-wanted list, along with H. Rap Brown. He has been underground for over eight months and will continue to remain so- an outlaw making revolution in the Mother Country.]

Sundance: Well, Outlaw, how does it feel to be deep in the belly of the great White Whale?

Pun: Well, it really hasn't been any different than what it has been for the last few years, since the youth culture has been growing and developing, cause our whole culture is outlaw, our whole lifestyle is against the law. From fucking to smoking dope to our music. They wanna stop us from smoking dope, they wanna stop us from fucking, they wanna stop us from listening to our music. But, now, when you get into a position where the FBI is looking for you, it's just intensified, and it's a little easier to deal with, I think, because things are more pronounced. The line of demarcation is just more pronounced.

Sundance: Well, I just think it's a great inspiration to most people because most people think "Well Jesus, if I get caught I'll just have to go to jail,"and you ain't in jail, you know. It's a great example for millions of people to relate to, what it means to be an outlaw. It doesn't mean being in jail, it means going out and making revolution in the mother-country.

Pun: Right. That's one reason that, when I went underground, about eight months ago, I didn't split the country, as an example to other people. It does two things, it shows just how fucked-up and lame the pigs are, and shows people that there are other ways to deal with the madness going on than just to go to Canada, or go to Sweden or wherever people go. There is a whole bunch of people in this country who are leaving, and that is an incredible energy drain on the movement. There is an energy drain from draft dodgers and army deserters, they get jammed up and just split the country. I understand that there are something like 40,000 or 60,000 in Toronto alone, who are army deserters. What we would like to say to those people is stay in the mother-country and organize in the mother-country, and try to bring about an end to this fascist terror that's going on. Mao calls it flightism, avoid flightism. There's other brothers and sisters that get busted for dope, and are facing big prison terms for dope, and we would just like to encourage them to stay here, stay in the country and get it on. And it can be done, because the White Panther Party wasn't tuned into some kind of international communist conspiracy or nothing, we were just trying to deal with the situation on a day to day basis. And what we out is that there are people all over the country who will feed us, hide us, and take care of us, and there is a real underground developing in this country now, it can be done. I went all over the motherfucking country, I've traveled more since I went underground than before I went underground, living with people, talking with people, trying to raise their consciousness, and my consciousness has really been expanded at the same time by listening to other people's ideas. Ideas, as Mao Tse Tung says, come from the people to the people. And we can do this, but we gotta avoid flightism and stay here and make revolution in the mother-country.

Sundance: You've been developing a lot of international consciousness since you've been underground, too. From Malcolm and the dispatches from Eldridge and things. You should talk about the international struggle, and how it relates to the White Panther Party.

Pun: Well the biggest thing, the biggest influence on me, is that I've just finished reading Malcolm X Speaks, which is his speeches and writings after he got back from Mecca, after his historic pilgrimage to Mecca. The internationalist trip is just an unlimited source of energy and inspiration, when you get into it and when you understand it. It's like this country can 't deal with the brothers and sisters going down to Cuba to cut cane because that does two things. The people that go there find out that the Cuban people really love them, really love the people in this country, and it show the Cuban people that the people in this country love them too, and that we're willing to get started on some meaningful international relations. And so now we read in the press that that fucking punk Eastland, Senator Eastland and the rest of those sissies say that the brothers and sisters are learning guerrilla warfare. Well, I personally wish that they would, that brother Fidel and them cats would find ways and find time so brothers and sisters from America could go down there and learn some guerrilla warfare. I know I'd be down there right now. But I know Castro is concerned with his eight million brothers and sisters. He's concerned with just feeding them and harvesting ten million tons of sugar, and I don't think he's teaching strategy or sabotage. But, like I said, I wish he was.

Sundance: The pigs want to execute Bobby Seale right now on the bogus thing in Connecticut, along with fifteen other brothers and sisters, including Erika Huggins. It seems that conventional methods of dealing with this kind of thing have sorta flown out the window when you consider what the pigs have done with brother Bobby.

Pun: Well Bobby Seale man, that's like Huey Newton. Those motherfuckers wanted to gas Huey Newton a while back but the people rose up in indignation and demanded that Huey not be gassed. And like I tried to say in an article I wrote a while back the newest, most powerful, most advanced gas chamber in the world couldn't gas Huey Newton cause the people wouldn't let it happen. But like Eldridge says, we're getting down to the nitty-gritty and we're not gonna miss no nits or no grits, and I don't know how to' say this powerfully enough, but Bobby Scale has got to be cut loose. Because it's just getting out of hand. There's just no way you can deal with fascism in any kind of organized, legal manner. You can deal with it in an organized manner by all means- organized, revolutionary violence against those motherfuckers to cut Bobby Seale loose. We gotta do something. Because they're just trying to intimidate other members of the party, they're trying to, intimidate the people at large. They figure if they can get away with putting Bobby Seale in the gas chamber, they can get away with frying anybody. But we just gotta show them that we ain't just jiving and that we're going beyond any sort of a turning back point now.

Sundance: Well, the success of the brothers in Latin America, ripping off fucking U.S. ambassadors and Guatemalan foreign ministers and shit, and demanding that the people be set free, is really inspirational.

Pun: Yeah it truly is, man. We could just kidnap five or six hundred of those motherfuckers, cause it's gonna take about six hundred of those motherfuckers to even halfway equal Bobby Seale. So we think, well fuck, we got a whole lot of things we can do. We could kidnap the motherfuckers, we could assassinate the motherfuckers, we can blow up their mommas, we can blow up their grandmas, It's just outta hand, and it's a crying shame that it's gone this far. And the only way it's gonna stop or change at all is if the people get so pissed off, and they realize that they ain't got nothing to lose, and they got everything to gain, and they start moving on that shit.

Sundance: We were talking about this before, the thing about the Conspiracy march, about trashing, when seven white men get put in jail; but when Bobby Seale gets kidnapped, and Fred Hampton gets murdered, you know, and there's all this liberal sympathy. It just seems to me that it really brings out the racist thing best, that that kind of situation could happen with people doing nothing about it.

Pun: Yeah, how 'bout that, man? There's seven white mother-country people get sentenced, and people go out and do millions of dollars worth of damage and shit, but like you said, when Bobby Seale was gagged, and now he's extradited to Connecticut, and Fred Hampton was wasted in his bed, man, after he was drugged, and what happened? Nothing happened. People did a little bit of shit, but nothing, man. I know if I'd been there, there'd have been some ass-kicking one way or another. I'd have kicked ass or died trying. People just cannot be intimidated behind that shit, man, because that's how they been holding us back all this time.

Sundance: It's a totally defeatist trip. It's like they can get away with this shit and we just stand by.

Pun: Right. It's like they can put John in jail, put John Sinclair in the slam for 9 1/2 to 10 years, and we ain't done nothing yet, I don't really think we have, not anything near what needs to be done. That's why I really relate to the Weatherman, I really gotta relate to them, cause they ain't giving out no position papers, man, they don't have to call no press conferences on where they stand on Vietnam and liberation and shit, cause, like they say about the Weathermen, actions speak louder than words. And all I can say about the Weathermen, man, is power to 'em, I think they're a great inspiration to everyone in the mother country. And after what happened with sister Diana Oughton, and those other brother's in New York, Ted Gold and Terry Robbins--I would think that that would inspire people to a higher level of revolutionary violence, to avenge ourselves of these brother's and sister's deaths.