Of Defense Speaks From The Underground: Prise Attack 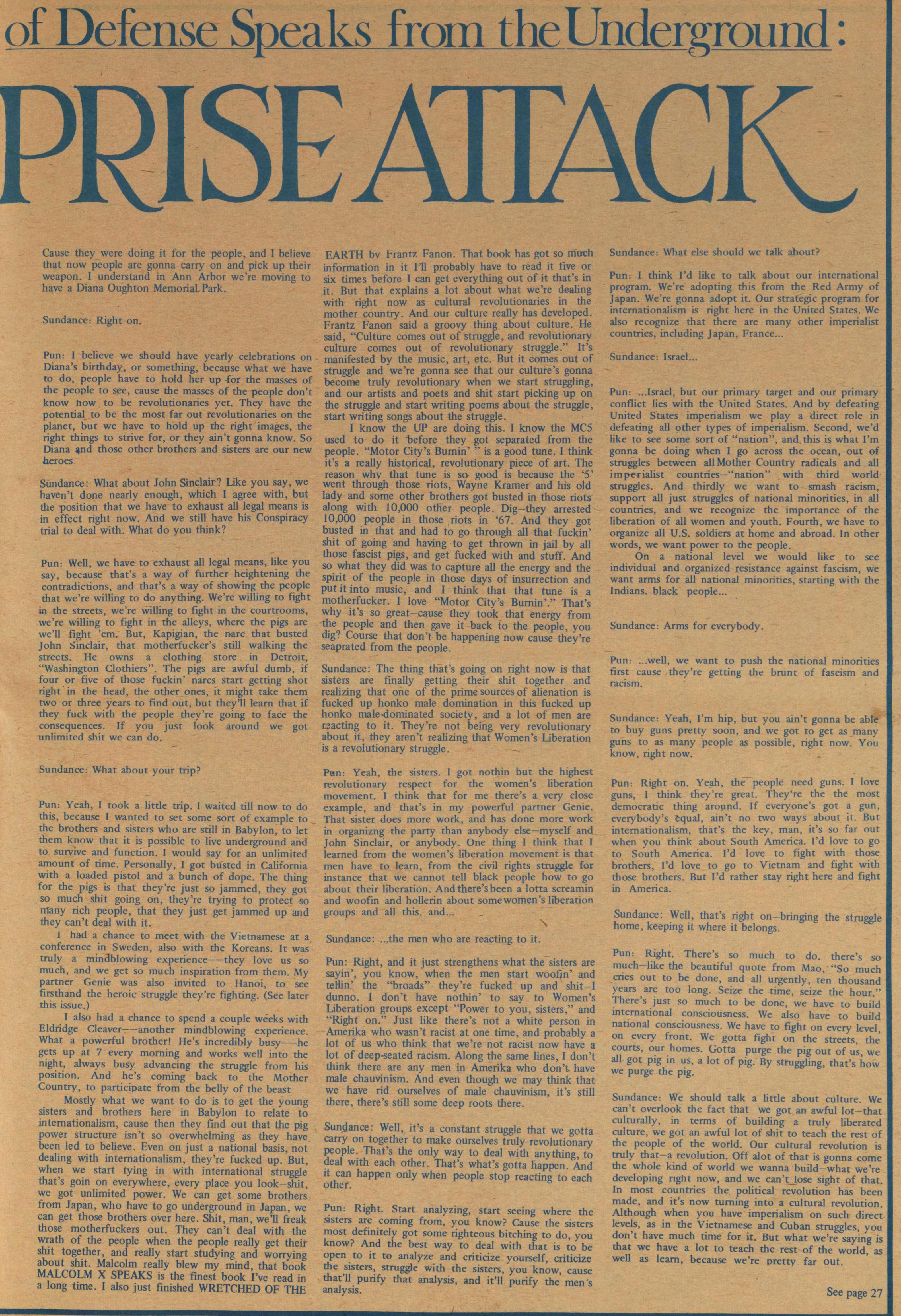 Cause they were doing it for the people, and I believe that now people are gonna carry on and pick up their weapon. I understand in Ann Arbor we're moving to have a Diana Oughton Memorial Park.

Pun: I believe we should have yearly celebrations on Diana's birthday, or something, because what we have to do, people have to hold her up for the masses of the people to see, cause the masses of the people don't know how to be revolutionaries yet. They have the potential to be the most far out revolutionaries on the planet, but we have to hold up the right images, the right things to strive for, or they ain't gonna know. So Diana and those other brothers and sisters are our new heroes.

Sundance: What about John Sinclair? Like you say, we haven't done nearly enough, which I agree with, but the position that we have to exhaust all legal means is in effect right now. And we still have his Conspiracy trial to deal with. What do you think?

Sundance: What about your trip?

Pun: Yeah, I took a little trip. I waited till now to do this, because I wanted to set some sort of example to the brothers and sisters who are still in Babylon, to let them know that it is possible to live underground and to survive and function. I would say for an unlimited amount of time. Personally, I got busted in California with a loaded pistol and a bunch of dope. The thing for the pigs is that they're just so jammed, they got so much shit going on, they're trying to protect so many rich people, that they just get jammed up and they can 't deal with it.

I had a chance to meet with the Vietnamese at a conference in Sweden, also with the Koreans. It was truly a mindblowing experience - they love us so much, and we get so much inspiration from them. My partner Genie was also invited to Hanoi, to see firsthand the heroic struggle they're fighting. (See later this issue.)

I also had a chance to spend a couple weeks with Eldridge Cleaver - another mindblowing experience. What a powerful brother! He's incredibly busy - he gets up at 7 every morning and works well into the night, always busy advancing the struggle from his position. And he's coming back to the Mother Country, to participate from the belly of the beast.

Mostly what we want to do is to get the young sisters and brothers here in Babylon to relate to internationalism, cause then they find out that the pig power structure isn't so overwhelming as they have been led to believe. Even on just a national basis, not dealing with internationalism, they're fucked up. But, when we start tying in with international struggle that's goin on everywhere, every place you look -shit, we got unlimited power. We can get some brothers from Japan, who have to go underground in Japan, we can get those brothers over here. Shit, man, we'll freak those motherfuckers out. They can 't deal with the wrath of the people when the people really get their shit together, and really start studying and worrying about shit. Malcolm really blew my mind, that book MALCOLM X SPEAKS is the finest book I've read in a long time. I also just finished WRETCHED OF THE EARTH by Frantz Fanon. That book has got so much information in it l'll probably have to read it five or six times before I can get everything out of it that's in it. But that explains a lot about what we're dealing with right now as cultural revolutionaries in the mother country. And our culture really has developed. Frantz Fanon said a groovy thing about culture. He said, "Culture comes out of struggle, and revolutionary culture comes out of revolutionary struggle." It's manifested by the music, art, etc. But it comes out of struggle and we're gonna see that our culture's gonna become truly revolutionary when we start struggling, and our artists and poets and shit start picking up on the struggle and start writing poems about the struggle, start writing songs about the struggle.

I know the UP are doing this. I know the MC5 used to do it before they got separated from the people. "Motor City's Burnin' " is a good tune. I think it's a really historical, revolutionary piece of art. The reason why that tune is so good is because the '5' went through those riots, Wayne Kramer and his old lady and some other brothers got busted in those riots along with 10,000 other people. Dig-they arrested 10,000 people in those riots in '67. And they got busted in that and had to go through all that fuckin' shit of going and having to get thrown in jail by all those fascist pigs, and get fucked with and stuff. And so what they did was to capture all the energy and the spirit of the people in those days of insurrection and put it into music, and I think that that tune is a motherfucker. I love "Motor City's Burnin'." That's why it's so great-cause they took that energy from the people and then gave it back to the people, you dig? Course that don't be happening now cause they're separated from the people.

Sundance: The thing that's going on right now is that sisters are finally getting their shit together and realizing that one of the prime sources of alienation is fucked up honko male domination in this fucked up honko male-dominated society, and a lot of men are reacting to it. They're not being very revolutionary about it, they aren't realizing that Women's Liberation is a revolutionary struggle.

Pun: Yeah, the sisters. I got nothin but the highest revolutionary respect for the women's liberation movement. I think that for me there's a very close example, and that's in my powerful partner Genie. That sister does more work, and has done more work in organizing the party than anybody else- myself and John Sinclair, or anybody. One thing I think that I learned from the women's liberation movement is that men have to learn, from the civil rights struggle for instance that we cannot tell black people how to go about their liberation. And there's been a lotta screamin and woofin and hollerin about some women's liberation groups and all this, and...

Sundance: ...the men who are reacting to it.

Pun: Right, and it just strengthens what the sisters are sayin', you know, when the men start woofjn' and tellin' the "broads" they're fucked up and shit- I dunno. I don't have nothin' to say to Women's Liberation groups except "Power to you, sisters," and "Right on." Just like there's not a white person in Amerika who wasn't racist at one time, and probably a lot of us who think that we're not racist now have a lot of deep-seated racism. Along the same lines, I don't think there are any men in Amerika who don't have male chauvinism. And even though we may think that we have rid ourselves of male chauvinism, it's still there, there's still some deep roots there.

Sundance: Well, it's a constant struggle that we gotta carry on together to make ourselves truly revolutionary people. That's the only way to deal with anything to deal with each other. That's what's gotta happen. And it can happen only when people stop reacting to each other.

Sundance: What else should we talk about?

Pun: I think I'd like to talk about our international program. We're adopting this from the Red Army of Japan. We're gonna adopt it. Our strategic program for internationalism is right here in the United States. We also recognize that there are many other imperialist countries, including Japan, France...

Pun: ...Israel, but our primary target and our primary conflict lies with the United States. And by defeating United States imperialism we play a direct role in defeating all other types of imperialism. Second, we'd like to see some sort of "nation", and this is what I'm gonna be doing when I go across the ocean, out of struggles between all Mother Country radicals and all imperialist countries- "nation" with third world struggles. And thirdly we want to smash racism, support all just struggles of national minorities, in all countries, and we recognize the importance of the liberation of all women and youth. Fourth, we have to organize all U.S. soldiers at home and abroad. In other words, we want power to the people.

On a national level we would like to see individual and organized resistance against fascism, we want arms for all national minorities, starting with the Indians. black people...

Sundance: Arms for everybody.

Pun: ...well, we want to push the national minorities first cause they're getting the brunt of fascism and racism.

Sundance: Yeah, I'm hip, but you ain't gonna be able to buy guns pretty soon, and we got to get as many guns to as many people as possible, right now. You know, right now.

Pun: Right on. Yeah, the people need guns. I love guns, I think they're great. They're the the most democratic thing around. If everyone's got a gun, everybody's equal, ain't no two ways about it. But internationalism, that's the key, man, it's so far out when you think about South America. I'd love to go to South America. I'd love to fight with those brothers, I'd love to go to Vietnam and fight with those brothers. But I'd rather stay right here and fight in America.

Sundance: Well, that's right on-bringing the struggle home, keeping it where it belongs.

Pun: Right. There's so much to do. there's so much-like the beautiful quote from Mao, "So much cries out to be done, and all urgently, ten thousand years are too long. Seize the time, seize the hour." There's just so much to be done, we have to build international consciousness. We also have to build national consciousness. We have to fight on every level on every front. We gotta fight on the streets, the courts, our homes. Gotta purge the pig out of us, we all got pig in us, a lot of pig. By struggling, that's how we purge the pig.

Sundance: We should talk a little about culture. We can't overlook the fact that we got an awful lot-that culturally, in terms of building a truly liberated culture, we got an awful lot of shit to teach the rest of the people of the world. Our cultural revolution is truly that-a revolution. Off a lot of that is gonna come the whole kind of world we wanna build-what we're developing right now, and we can't lose sight of that. In most countries the political revolution has been made, and it's now turning into a cultural revolution. Although when you have imperialism on such direct levels, as in the Vietnamese and Cuban struggles, you don't have much time for it. But what we're saying is that we have a lot to teach the rest of the world, as well as learn, because we're pretty far out.