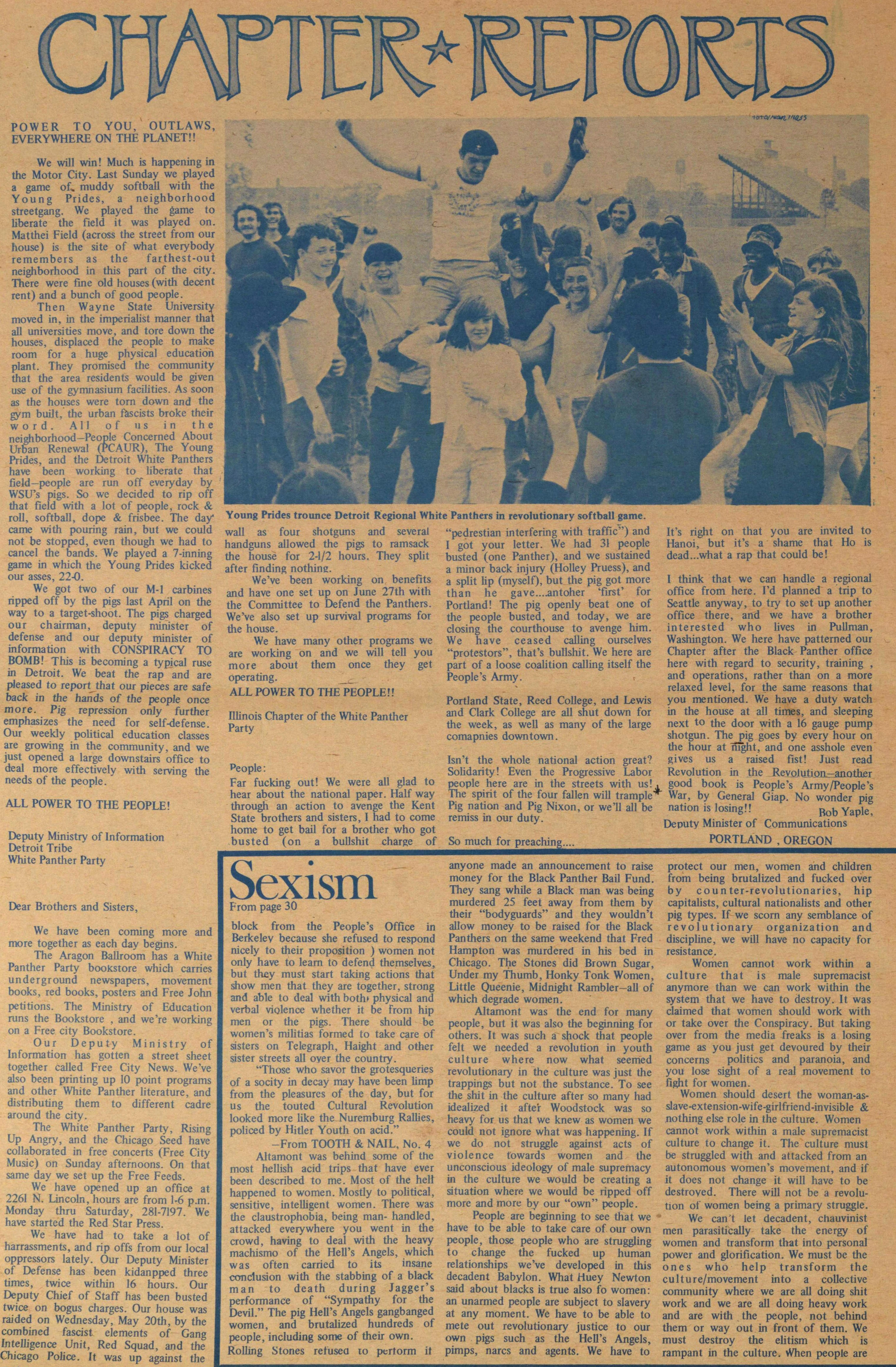 POWER TO YOU, OUTLAWS, EVERYWHERE ON THE PLANET!

We will win! Much is happening in the Motor City. Last Sunday we played a game of, muddy softball with the Young Prides, a neighborhood streetgang. We played the game to liberate the field it was played on. Matthei Field (across the street from our house) is the site of what everybody remembers as the farthest-out neighborhood in this part of the city. There were fine old houses (with decent rent) and a bunch of good people.

Then Wayne State University moved in, in the imperialist manner that all universities move, and tore down the houses, displaced the people to make room for a huge physical education plant. They promised the community that the area residents would be given use of the gymnasium facilities. As soon as the houses were torn down and the gym built, the urban fascists broke their word. All of us in the neighborhood-People Concerned About Urban Renewal (PCAUR), The Young Prides, and the Detroit White Panthers have been working to liberate that field- people are run off everyday by WSU's pigs. So we decided to rip off that field with a lot of people, rock & roll, softball, dope & frisbee. The day came with pouring rain, but we could not be stopped, even though we had to cancel the bands. We played a 7-inning game in which the Young Prides kicked our asses, 22-0.

We got two of our M-l carbines ripped off by the pigs last April on the way to a target-shoot. The pigs charged our chairman, deputy minister of defense and our deputy minister of information with CONSPIRACY TO BOMB! This is be coming a typical ruse in Detroit. We beat the rap and are pleased to report that our pieces are safe back in the hands of the people once more. Pig repression only further emphasizes the need for self-defense. Our weekly political education classes are growing in the community, and we just opened a large downstairs office to deal more effectively with serving the needs of the people.

We have been coming more and more together as each day begins.

The Aragon Ballroom has a White Panther Party bookstore which carries underground newspapers, movement books, red books, posters and Free John petitions. The Ministry of Education runs the Bookstore, and we 're working on a Free city Bookstore.

Our Deputy Ministry of Information has gotten a street sheet together called Free City News. We've also been printing up 10 point programs and other White Panther literature, and distributing them to different cadre around the city.

The White Panther Party, Rising Up Angry, and the Chicago Seed have collaborated in free concerts (Free City Music) on Sunday afternoons. On that same day we set up the Free Feeds.

We have had to take a lot of harassments, and rip offs from our local oppressors lately. Our Deputy Minister of Defense has been kidnapped three times, twice within 16 hours. Our Deputy Chief of Staff has been busted twice on bogus charges. Our house was raided on Wednesday, May 20th, by the combined fascist elements of Gang Intelligence Unit, Red Squad, and the Chicago Police. It was up against the wall as four shotguns and several handguns allowed the pigs to ransack the house for 2-1/2 hours. They split after finding nothing.

We've been working on benefits and have one set up on June 27th with the Committee to Defend the Panthers. We've also set up survival programs for the house.

We have many other programs we are working on and we will tell you more about them once they get operating.

ALL POWER TO THE PEOPLE!!

Far fucking out! We were all glad to hear about the national paper. Half way through an action to avenge the Kent State brothers and sisters, I had to come home to get bail for a brother who got busted (on a bullshit charge of "pedestrian interfering with traffic") and I got your letter. We had 31 people busted (one Panther), and we sustained a minor back injury (Holley Pruess), and a split lip (myself), but the pig got more than he gave....another 'first' for Portland! The pig openly beat one of the people busted, and today, we are closing the courthouse to avenge him. We have ceased calling ourselves "protestors", that's bullshit. We here are part of a loose coalition calling itself the People 's Army.

Portland State, Reed College, and Lewis and Clark College are all shut down for the week, as well as many of the large companies downtown.

Isn't the whole national action great? Solidarity! Even the Progressive Labor people here are in the streets with us! The spirit of the four fallen will trample Pig nation and Pig Nixon, or we'll all be remiss in our duty.

So much for preaching....

It's right on that you are invited to Hanoi, but it's a shame that Ho is dead...what a rap that could be!

I think that we can handle a regional office from here. I'd planned a trip to Seattle anyway, to try to set up another office there, and we have a brother interested who lives in Pullman, Washington. We here have patterned our Chapter after the Black Panther office here with regard to security, training, and operations, rather than on a more relaxed level, for the same reasons that you mentioned. We have a duty watch in the house at all times, and sleeping next to the door with a 16 gauge pump shotgun. The pig goes by every hour on the hour at night, and one asshole even gives us a raised fist! Just read Revolution in the Revolution-another good book is People's Army/People's War, by General Giap. No wonder pig nation is losing!!