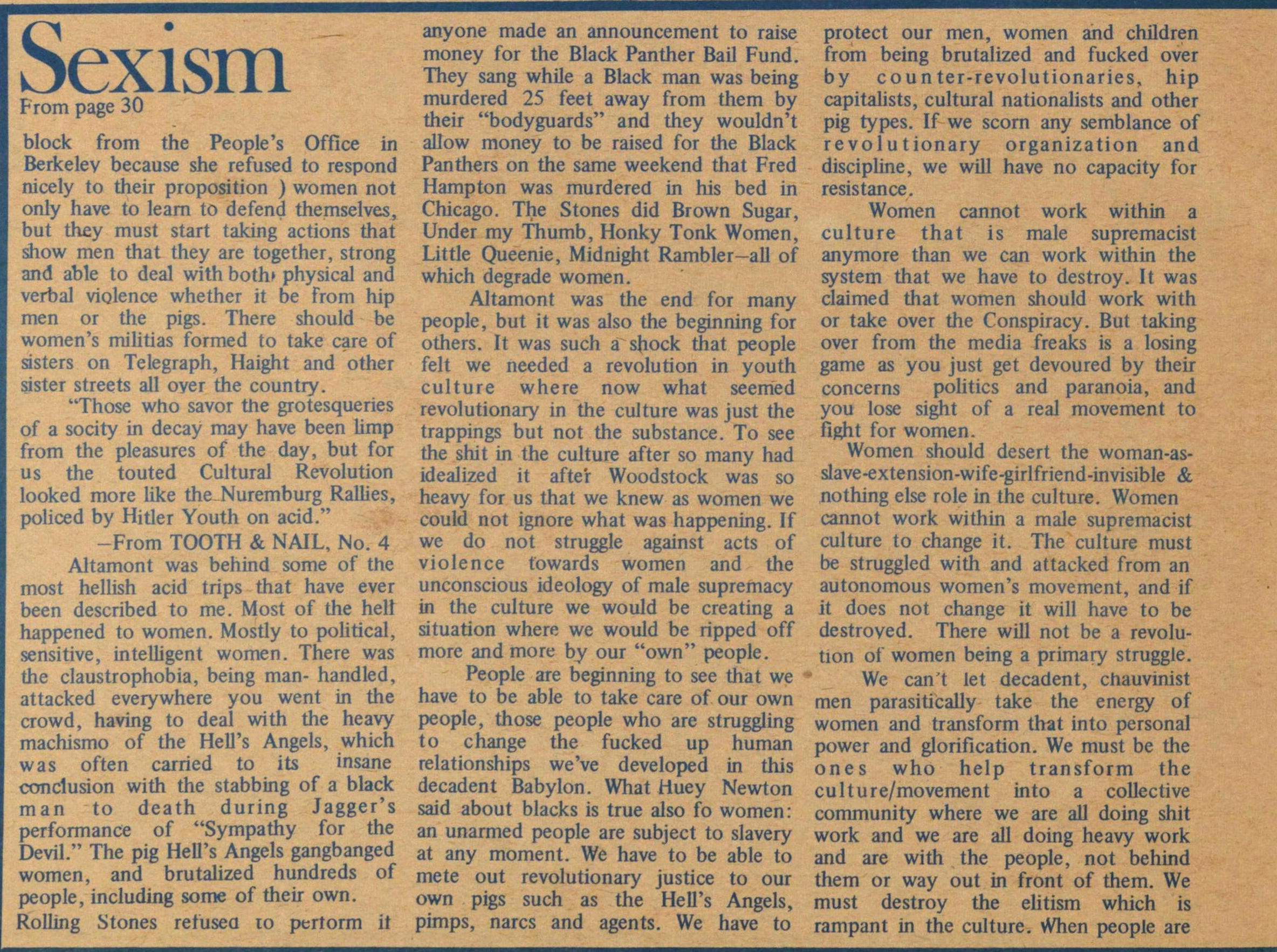 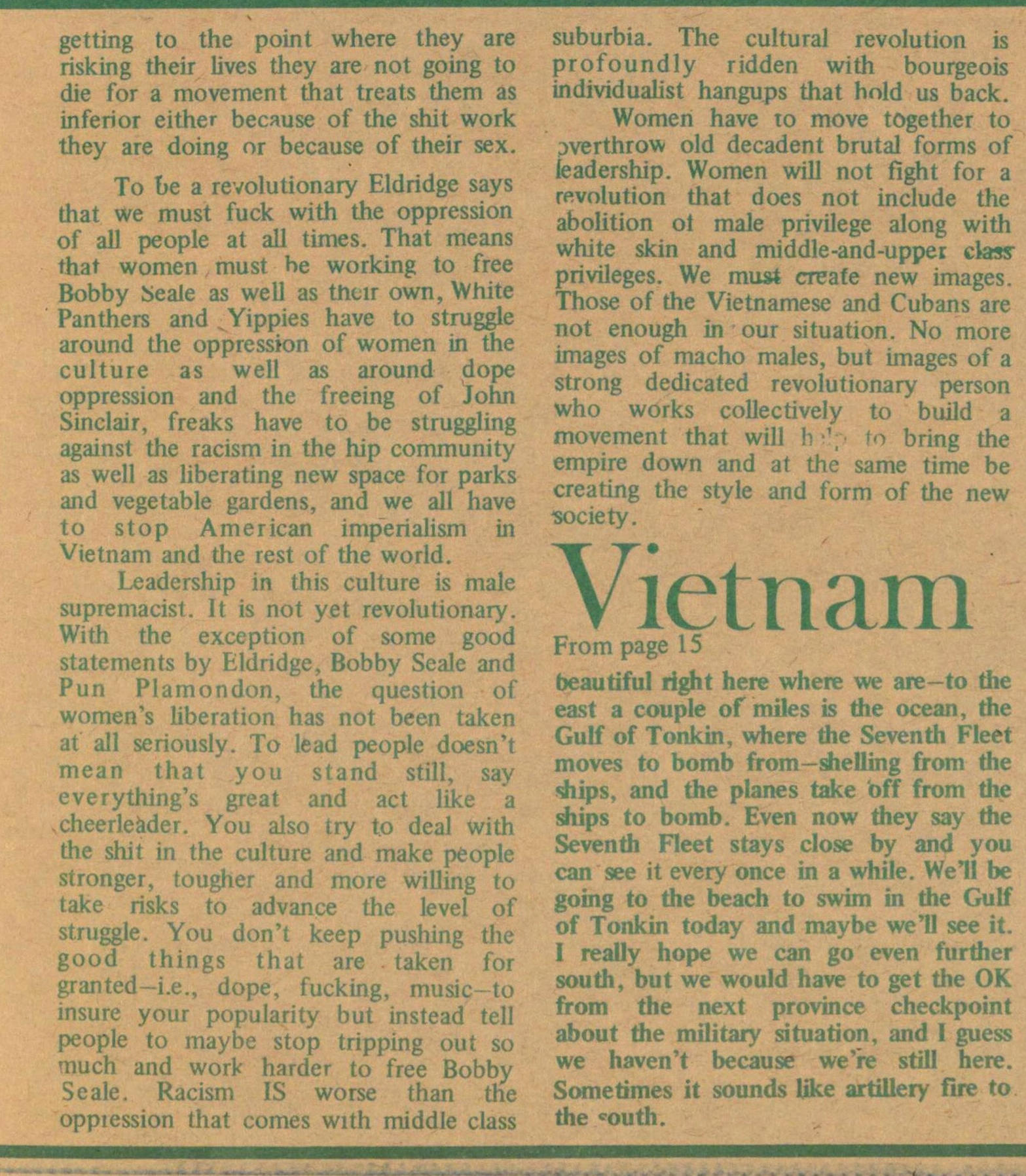 block from the People's Office in Berkeley because she refused to respond nicely to their proposition ) women not only have to learn to defend themselves, but they must start taking actions that show men that they are together, strong and able to deal with both physical and verbal violence whether it be from hip men or the pigs. There should be women's militias formed to take care of asters on Telegraph, Haight and other sister streets all over the country.

"Those who savor the grotesqueries of a society in decay may have been limp from the pleasures of the day, but for us the touted Cultural Revolution looked more like the Nuremburg Rallies, policed by Hitler Youth on acid."

Altamont was behind some of the most hellish acid trips that have ever been described to me. Most of the hell happened to women. Mostly to political, sensitive, intelligent women. There was the claustrophobia, being man-handled, attacked everywhere you went in the crowd, having to deal with the heavy machismo of the Hell's Angels, which was often carried to its insane conclusion with the stabbing of a black man to death during Jagger's performance of "Sympathy for the Devil." The pig Hell's Angels gangbanged women, and brutalized hundreds of people, including some of their own.

Rolling Stones refused to perform if anyone made an announcement to raise money for the Black Panther Bail Fund. They sang while a Black man was being murdered 25 feet away from them by their "bodyguards" and they wouldn't allow money to be raised for the Black Panthers on the same weekend that Fred Hampton was murdered in his bed in Chicago. The Stones did Brown Sugar, Under my Thumb, Honky Tonk Women, Little Queenie, Midnight Rambler-all of which degrade women.

Altamont was the end for many people, but it was also the beginning for others. It was such a shock that people felt we needed a revolution in youth culture where now what seemed revolutionary in the culture was just the trappings but not the substance. To see the shit in the culture after so many had idealized it after Woodstock was so heavy for us that we knew as women we could not ignore what was happening. If we do not struggle against acts of violence towards women and the unconscious ideology of male supremacy in the culture we would be creating a situation where we would be ripped off more and more by our "own" people.

People are beginning to see that we have to be able to take care of our own people, those people who are struggling to change the fucked up human relationships we've developed in this decadent Babylon. What Huey Newton said about blacks is true also for women: an unarmed people are subject to slavery at any moment. We have to be able to mete out revolutionary justice to our own pigs such as the Hell's Angels, pimps, narcs and agents. We have to protect our men, women and children from being brutalized and fucked over by counter-revolutionaries, hip capitalists, cultural nationalists and other pig types. If we scorn any semblance of revolutionary organization and discipline, we will have no capacity for resistance.

Women cannot work within a culture that is male supremacist anymore than we can work within the system that we have to destroy. It was claimed that women should work with or take over the Conspiracy. But taking over from the media freaks is a losing game as you just get devoured by their concerns politics and paranoia, and you lose sight of a real movement to fight for women.

Women should desert the woman-as-slave-extension-wife-girlfriend-invisible & nothing else role in the culture. Women cannot work within a male supremacist culture to change it. The culture must be struggled with and attacked from an autonomous women's movement, and if it does not change it will have to be destroyed. There will not be a revolution of women being a primary struggle.

We can't let decadent, chauvinist men parasitically take the energy of women and transform that into personal power and glorification. We must be the ones who help transform the culture/movement into a collective community where we are all doing shit work and we are all doing heavy work and are with the people, not behind them or way out in front of them. We must destroy the elitism which is rampant in the culture. When people are getting to the point where they are risking their lives they are not going to die for a movement that treats them as inferior either because of the shit work they are doing or because of their sex.

To be a revolutionary Eldridge says that we must fuck with the oppression of all people at all times. That means that women must be working to free Bobby Seale as well as their own, White Panthers and Yippies have to struggle around the oppression of women in the culture as well as around dope oppression and the freeing of John Sinclair, freaks have to be struggling against the racism in the hip community as well as liberating new space for parks and vegetable gardens, and we all have to stop American imperialism in Vietnam and the rest of the world.

Leadership in this culture is male supremacist. It is not yet revolutionary. With the exception of some good statements by Eldridge, Bobby Seale and Pun Plamondon, the question of women's liberation has not been taken at all seriously. To lead people doesn't mean that you stand still, say everything's great and act like a cheerleader. You also try to deal with the shit in the culture and make people stronger, tougher and more willing to take risks to advance the level of struggle. You don't keep pushing the good things that are taken for granted-i.e., dope, fucking, music-to insure your popularity but instead tell people to maybe stop tripping out so much and work harder to free Bobby Seale. Racism IS worse than the oppression that comes with middle class suburbia. The cultural revolution is profoundly ridden with bourgeois individualist hangups that hold us back.

Women have to move together to overthrow old decadent brutal forms of leadership. Women will not fight for a revolution that does not include the abolition of male privilege along with white skin and middle-and-upper class privileges. We must create new images. Those of the Vietnamese and Cubans are not enough in our situation. No more images of macho males, but images of a strong dedicated revolutionary person who works collectively to build a movement that will help to bring the empire down and at the same time be creating the style and form of the new society.