From Hip To Revolution 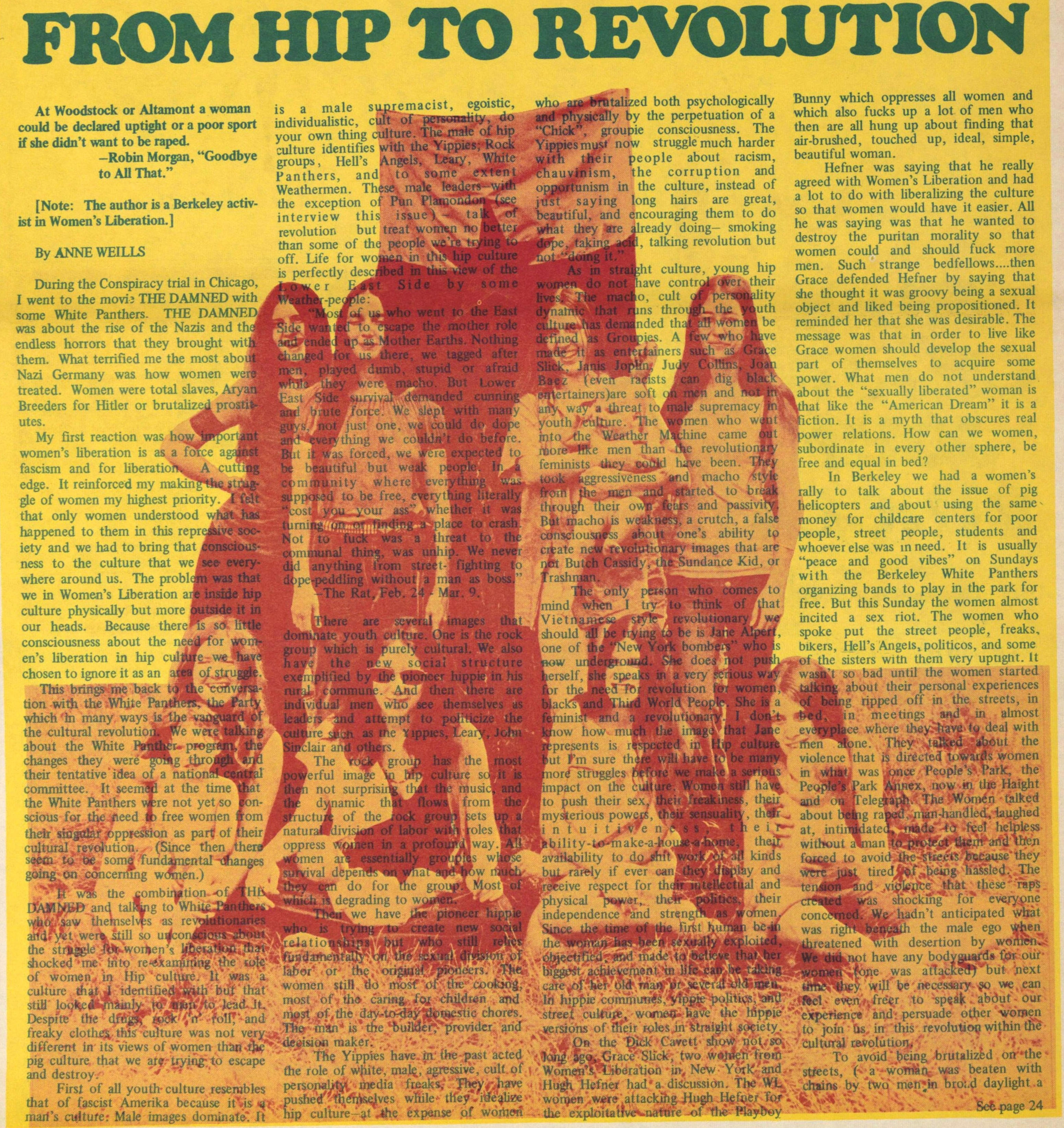 At Woodstock or Altamont a woman could be declared uptight or a poor sport if she didn't want to be raped.

-Robin Morgan, "Goodbye to All That."

[Note: The author is a Berkeley activist in Women's Liberation.]

During the Conspiracy trial in Chicago, I went to the movie THE DAMNED with some White Panthers. THE DAMNED was about the rise of the Nazis and the endless horrors that they brought with them. What terrified me the most about Nazi Germany was how women were treated. Women were total slaves, Aryan Breeders for Hitler or brutalized prostitutes.

My first reaction was how important women's liberation is as a force against fascism and for liberation. A cutting edge. It reinforced my making the struggle of women my highest priority. I felt that only women understood what has happened to them in this repressive society and we had to bring that consciousness to the culture that we see everywhere around us. The problem was that we in Women's Liberation are inside hip culture physically but more outside it in our heads. Because there is so little consciousness about the need for women's liberation in hip culture we have chosen to ignore it as an area of struggle.

It was the combination of THE DAMNED and talking to White Panthers who saw themselves as revolutionaries and yet were still so unconscious about the struggle for women's liberation that shocked me into re-examining the role of women in Hip culture. It was a culture that I identified with but that still looked mainly to men to lead it. Despite the drugs, rock 'n' roll, and freaky clothes, this culture was not very different in its views of women than the pig culture that we are trying to escape and destroy.

First of all youth culture resembles that of fascist Amerika because it is a man's culture. Male images dominate. It is a male supremacist, egoistic, individualistic, cult of personality, do your own thing culture. The male of hip culture identifies with the Yippies; Rock groups, Hell's Angels, Leary, White Panthers, and to some extent Weathermen. These male leaders--with the exception of Pun Plamondon (see interview this issue)--talk of revolution but treat women no better than some of the people we're trying to off. Life for women in this hip culture is perfectly described in this view of the Lower East Side by some Weather-people:

"Most of us who went to the East Side wanted to escape the mother role and ended up as Mother Earths. Nothing changed for us there, we tagged after men, played dumb, stupid or afraid while they were macho. But Lower East Side survival demanded cunning and brute force. We slept with many guys, not just one, we could do dope and everything we couldn't do before. But it was forced, we were expected to be beautiful but weak people. In a community where everything was supposed to be free, everything literally "cost you your ass" whether it was turning on or finding a place to crash. Not to fuck was a threat to the communal thing, was unhip. We never did anything from street-fighting to dope-peddling without a man as boss."

There are several images that dominate youth culture. One is the rock group which is purely cultural. We also have the new social structure exemplified by the pioneer hippie in his rural commune. And then there are individual men who see themselves as leaders and attempt to politicize the culture such as the Yippies, Leary, John Sinclair and others.

The rock group has the most powerful image in hip culture so it is then not surprising that the music, and the dynamic that flows from the structure of the rock group sets up a natural division of labor with roles that oppress women in a profound way. All women are essentially groupies whose survival depends on what and how much they can do for the group. Most of which is degrading to women.

Then we have the pioneer hippie who is trying to create new social relationships but who still relies fundamentally on the sexual division of labor or the original pioneers. The women still do most of the cooking, most of the caring for children, and most of the day-to-day domestic chores. The man is the builder, provider and decision maker.

The Yippies have in the past acted the role of white, male, aggressive, cult of personality media freaks. They have pushed themselves while they idealize hip culture at the expense of women who are brutalized both psychologically and physically by the perpetuation of a "Chick", groupie consciousness. The Yippies must now struggle much harder with their people about racism, chauvinism, the corruption and opportunism in the culture, instead of just saying long hairs are great, beautiful, and encouraging them to do what they are already doing--smoking dope, taking acid, talking revolution but not "doing it."

As in straight culture, young hip women do not have control over their lives. The macho, cult of personality dynamic that runs through the youth culture has demanded that all women be defined as Groupies. A few who have made it as entertainers such as Grace Slick, Janis Joplin, Judy Collins, Joan Baez (even racists can dig black entertainers) are soft on men and not in any way a threat to male supremacy in youth culture. The women who went into the Weather Machine came out more like men than the revolutionary feminists they could have been. They took aggressiveness and macho style from the men and started to break through their own fears and passivity. But macho is weakness, a crutch, a false consciousness about one's ability to create new revolutionary images that are not Butch Cassidy, the Sundance Kid, or Trashman.

The only person who come to mind when I try to think of that Vietnamese style revolutionary we should all be trying to be is Jane Alpert, one of the "New York bombers" who is now underground. She does not push herself, she speaks in a very serious way for the need for revolution for women, blacks and Third World People. She is a feminist and a revolutionary. I don't know how much the image that Jane represents is respected in Hip culture but I'm sure there will have to be many more struggles before we make a serious impact on the culture. Women still have to push their sex, their freakiness, their mysterious powers, their sensuality, their intuitiveness, their ability to make a house a home, their availability to do shit work of all kinds but rarely if ever can they display and receive respect for their intellectual and physical power, their politics, their independence and strength as women. Since the time of the first human being the woman has been sexually exploited, objectified, and made to believe that her biggest achievement in life can be taking care of her old man or several old men. In hippie communities, yippie politics, and street culture, women have the hippie versions of their roles in straight society.

On the Dick Cavett show not so long ago, Grace Slick, two women from Women's Liberation in New York and Hugh Hefner had a discussion. The WL women were attacking Hugh Hefner for the exploitative nature of the Playboy Bunny which oppresses all women and which also fucks up a lot of men who then are all hung up about finding that air-brushed, touched up, ideal, simple, beautiful woman.

Hefner was saying that he really agreed with Women's Liberation and had a lot to do with liberalizing the culture so that women would have it easier. All he was saying was that he wanted to destroy the puritan morality so that women could and should fuck more men. Such strange bedfellows....then Grace defended Hefner by saying that she thought it was groovy being a sexual object and liked being propositioned. It reminded her that she was desirable. The message was that in order to live like Grace women should develop the sexual part of themselves to acquire some power. What men do not understand about the "sexually liberated" woman is that like the "American Dream" is it a fiction. It is a myth that obscure real power relations. How can we women, subordinate in every other sphere, be free and equal in bed?

In Berkeley we had a women's rally to talk about the issue of pig helicopters and about using the same money for childcare centers for poor people, street people, students and whoever else was in need. It is usually "peace and good vibes" on Sundays with the Berkeley White Panthers organizing bands to play in the park for free. But this Sunday the women almost incited a sex riot. The women who spoke put the street people, freaks, bikers, Hell's Angels, politicos, and some of the sisters with them very uptight. It wasn't so bad until the women started talking about their personal experiences of being ripped off in the streets, in bed, in meetings and in almost everyplace where they have to deal with men alone. They talked about the violence that is directed towards women in what was one People's Park, the People's Park Annex, now in the Haight and on Telegraph. The Women talked about being raped, man-handled, laughed at, intimidated, made to feel helpless without a man to protect them and then forced to avoid the streets because they were just tired of being hassled. The tension and violence that these raps created was shocking for everyone concerned. We hadn't anticipated what was right beneath the male ego when threatened with desertion by women. We did not have any bodyguards for our women (one was attacked) but next time they will be necessary so we can feel even freer to speak about our experience and persuade other women to join us in this revolution within the cultural revolution.

To avoid being brutalized on the streets, (a woman was beaten with chains by two men in broad daylight a...