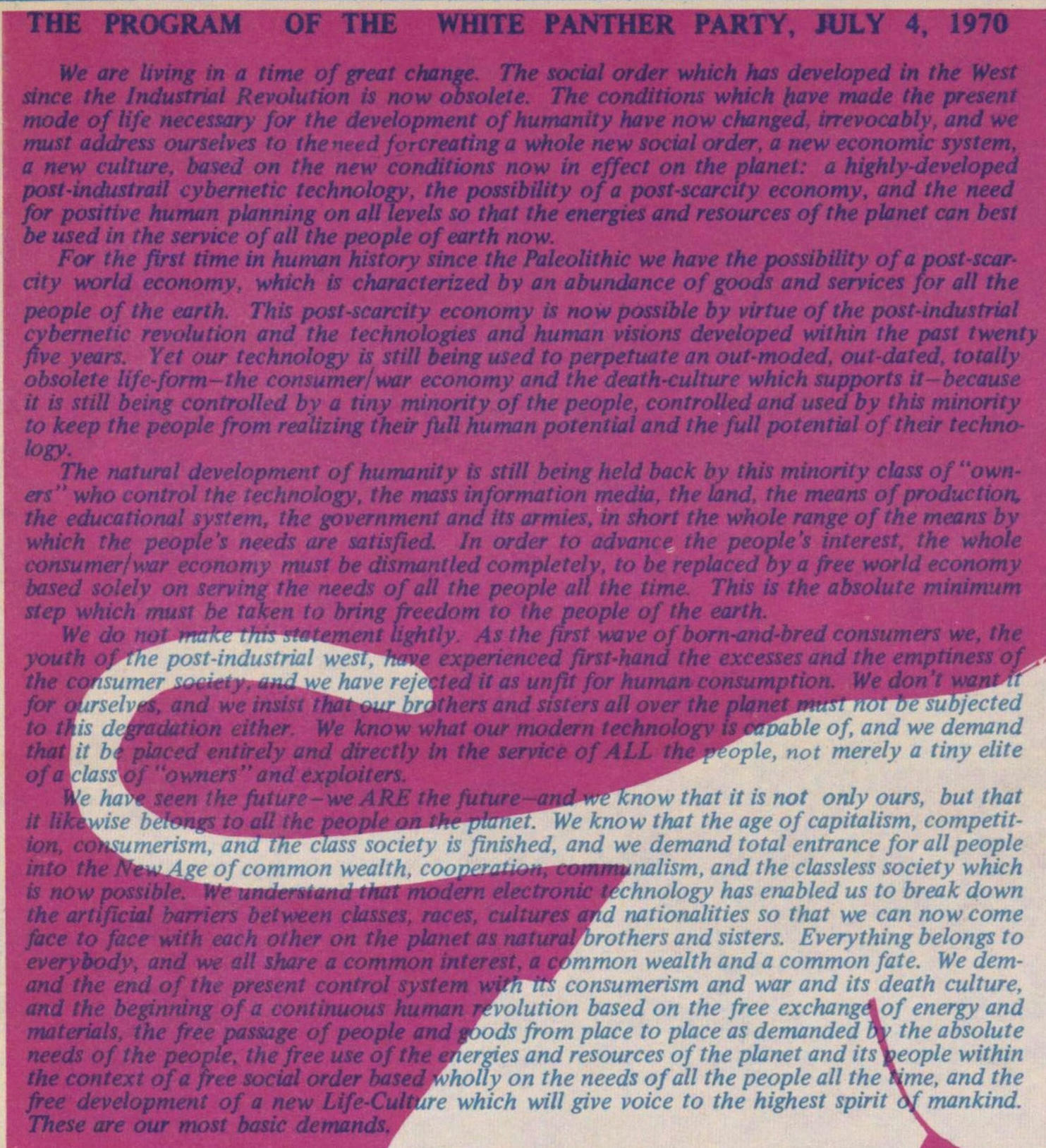 We are living in a time of great change. The social order which has developed in the West since the Industrial Revolution is now obsolete. The conditions which have made the present mode of life necessary for the development of humanity have now changed, irrevocably, and we must address ourselves to the need for creating a whole new social order, a new economic system, a new culture, based on the new conditions now in effect on the planet: a highly-developed post-industrial cybernetic technology, the possibility of a post-scarcity economy, and the need for positive human planning on all levels so that the energies and resources of the planet can best be used in the service of all the people of earth now.

For the first time in human history since the Paleolithic we have the possibility of a post-scarcity world economy, which is characterized by an abundance of goods and services for all the people of the earth. This post-scarcity economy is now possible by virtue of the post-industrial cybernetic revolution and the technologies and human visions developed within the past twenty five years. Yet our technology is still being used to perpetuate an out-moded, out-dated, totally obsolete life-form--the consumer/war economy and the death-culture which supports it--because it is still being controlled by a tiny minority of the people, controlled and used by this minority to keep the people from realizing their full human potential and the full potential of their technology.

The natural development of humanity is still being held back by this minority class of "owners" who control the technology, the mass information media, the land, the means of production, the educational system, the government and its armies, in short the whole range of the means by which the people's needs are satisfied. In order to advance the people's interest, the whole consumer/war economy must be dismantled completely, to be replaced by a free world economy based solely on serving the needs of all the people all the time. This is the absolute minimum step which must be taken to bring freedom to the people of the earth.

We do not make this statement lightly. As the first wave of born-and-bred consumers we, the youth of the post-industrial west, have experienced first-hand the excesses and the emptiness of the consumer society, and we have rejected it at unfit for human consumption. We don't want it for ourselves, and we insist that our brothers and sisters all over the planet must not be subjected to this degradation either. We know what our modern technology is capable of, and we demand that it be placed entirely and directly in the service of ALL the people, not merely a tiny elite of a class of "owners" and exploiters.

We have seen the future-we ARE the future-and we know that it is not only ours, but that it likewise belongs to all the people on the planet. We know that the age of capitalism, competition, consumerism, and the class society is finished, and we demand total entrance for all people into the New Age of common wealth, cooperation, communalism, and the classless society which is now possible. We understand that modern technology has enabled us to break down the artificial barriers between classes, races, cultures and nationalities so that we can now come face to face with each other on the planet as natural brothers and sisters. Everything belongs to everybody, and we all share a common interest, a common wealth and a common fate. We demand the end of the present control system with its consumerism and war and its death culture, and the beginning of a continuous human revolution based on the free exchange of energy and materials, the free passage of people and goods from place to place as demanded by the absolute needs of the people, the free use of the energies and resources of the planet and its people within the context of a free social order based wholly on the needs of all the people all the time, and the free development of a new Life-Culture which will give voice to the highest spirit of mankind. These are our most basic demands.