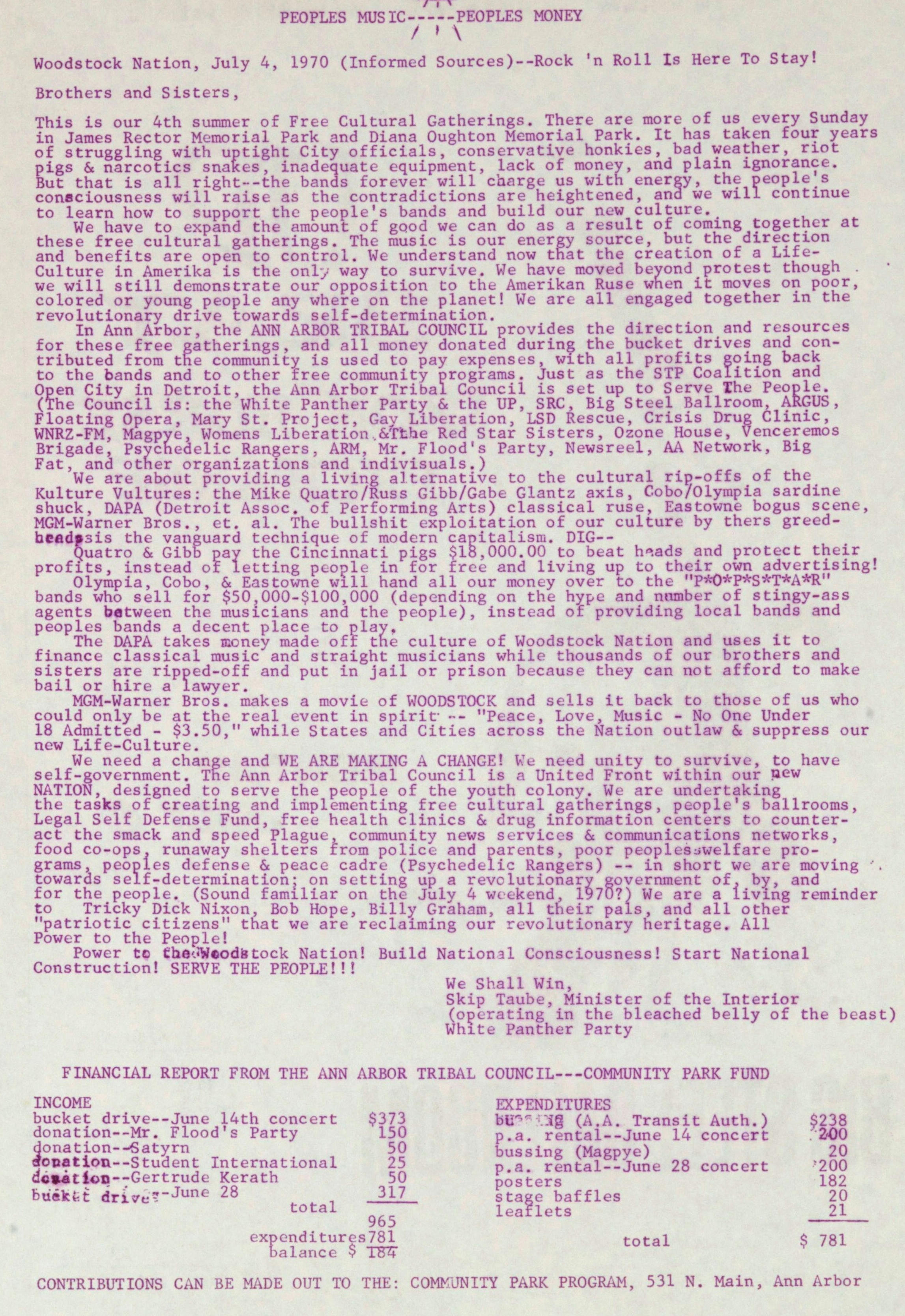 This is our 4th summer of Free Cultural Gatherings. There are more of us every Sunday in James Rector Memorial Park and Diana Oughton Memorial Park. It has taken four years of struggling with uptight City officials, conservative honkies, bad weather, riot pigs & narcotics snakes, inadequate equipment, lack of money, and plain ignorance. But that is all right--the bands forever will charge us with energy, the people's consciousness will raise as the contradictions are heightened, and we will continue to learn how to support the people's bands and build our new culture.

We have to expand the amount of good we can do as a result of coming together at these free cultural gatherings. The music is our energy source, but the direction and benefits are open to control. We understand now that the creation of a Life-Culture in Amerika is the only way to survive. We have moved beyond protest though we will still demonstrate our opposition to the Amerikan Ruse when it moves on poor, colored or young people any where on the planet! We are all engaged together in the revolutionary drive towards self-determination.

In Ann Arbor, the ANN ARBOR TRIBAL COUNCIL provides the direction and resources for these free gatherings, and all money donated during the bucket drives and contributed from the community is used to pay expenses, with all profits going back to the bands and to other free community programs. Just as the STP Coalition and Open City in Detroit, the Ann Arbor Tribal Council is set up to Serve The People. (The Council is: the White Panther Party & the UP, SRC, Big Steel Ballroom, ARGUS, Floating Opera, Mary St. Project, Gay Liberation, LSD Rescue, Crisis Drug Clinic, WNRZ-FM, Magpye, Womens Liberation & The Red Star Sisters, Ozone House, Venceremos Brigade, Psychedelic Rangers, ARM, Mr. Flood's Party, Newsreel, AA Network, Big Fat, and other organizations and individuals.)

We are about providing a living alternative to the cultural rip-offs of the Kulture Vultures : the Mike Quatro/Russ Gibb/Gabe Glantz axis, Cobo/Olympia sardine shuck, DAPA (Detroit Assoc. of Performing Arts) classical ruse, Eastowne bogus scene, MGM-Warner Bros., et. al. The bullshit exploitation of our culture by those greed heads is the vanguard technique of modern capitalism. DIG--

Quatro & Gibb pay the Cincinnati pigs $18,000.00 to beat heads and protect their profits, instead of letting people in for free and living up to their own advertising!

Olympia, Cobo, & Eastowne will hand all our money over to the "P*O*P*S*T*A*R" bands who sell for $50,000-$100,000 (depending on the hype and number of stingy-ass agents between the musicians and the people), instead of providing local bands and peoples bands a decent place to play.

The DAPA takes money made off the culture of Woodstock Nation and uses it to finance classical music and straight musicians while thousands of our brothers and sisters are ripped-off and put in jail or prison because they can not afford to make bail or hire a lawyer.

MGM-Warner Bros. makes a movie of WOODSTOCK and sells it back to those of us who could only be at the real event in spirit - "Peace, Love, Music - No One Under 18 Admitted - $3.50," while States and Cities across the Nation outlaw & suppress our new Life-Culture.

We need a change and WE ARE MAKING A CHANGE! We need unity to survive, to have self-government. The Ann Arbor Tribal Council is a United Front within our new NATION, designed to serve the people of the youth colony. We are undertaking the tasks of creating and implementing free cultural gatherings, people 's ballrooms, Legal Self Defense Fund, free health clinics & drug information centers to counter-act the smack and speed Plague, community news services & communications networks, food co-ops, runaway shelters from police and parents, poor peoples welfare programs, peoples defense & peace cadre (Psychedelic Rangers) -- in short we are moving towards self-determination; on setting up a revolutionary government of, by, and for the people. (Sound familiar on the July 4 weekend, 1970?) We are a living reminder to Tricky Dick Nixon, Bob Hope, Billy Graham, all their pals, and all other "patriotic citizens" that we are reclaiming our revolutionary heritage. All Power to the People!

Skip Taube, Minister of the Interior

(operating in the bleached belly of the beast)

CONTRIBUTIONS CAN BE MADE OUT TO THE: COMMUNITY PARK PROGRAM, 531 N. Main, Ann Arbor