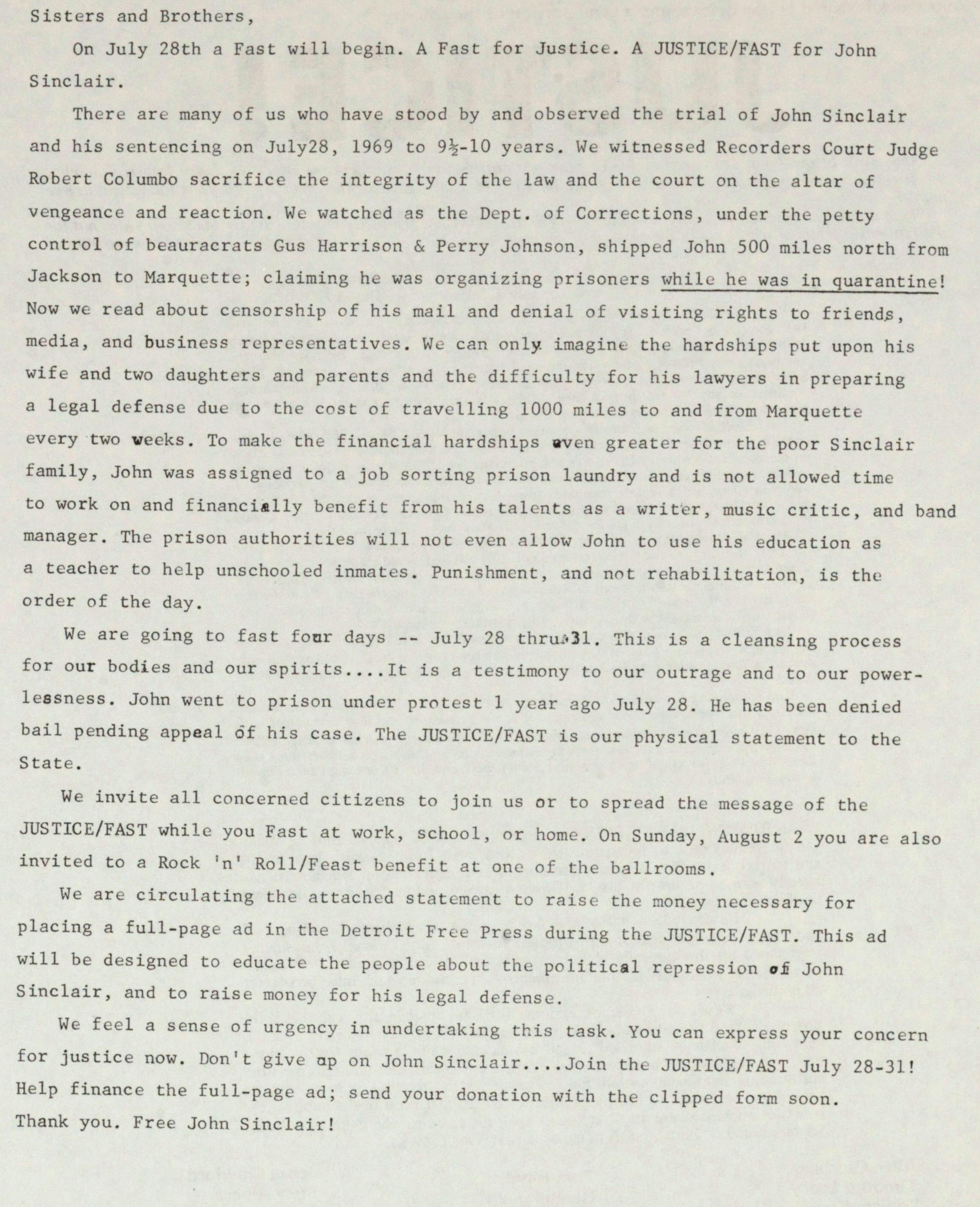 On July 28th a Fast will begin. A Fast for Justice. A JUSTICE/FAST for John Sinclair.

There are many of us who have stood by and observed the trial of John Sinclair and his sentencing on July28, 1969 to 9 1/2-10 years. We witnessed Recorders Court Judge Robert Columbo sacrifice the integrity of the law and the court on the altar of vengeance and reaction. We watched as the Dept. of Corrections , under the petty control of beauracrats Gus Harrison & Perry Johnson, shipped John 500 miles north from Jackson to Marquette; claiming he was organizing prisoners while he was in quarantine! Now we read about censorship of his mail and denial of visiting rights to friends, media, and business representatives. We can only imagine the hardships put upon his wife and two daughters and parents and the difficulty for his lawyers in preparing a legal defense due to the cost of travelling 1000 miles to and from Marquette every two weeks. To make the financial hardships even greater for the poor Sinclair family, John was assigned to a job sorting prison laundry and is not allowed time to work on and financially benefit from his talents as a writer, music critic, and band manager. The prison authorities will not even allow John to use his education as a teacher to help unschooled inmates. Punishment, and not rehabilitation, is the order of the day.

We are going to fast four days -- July 28 thru 31. This is a cleansing process for our bodies and our spirits It is a testimony to our outrage and to our powerlessness. John went to prison under protest 1 year ago July 28. He has been denied bail pending appeal of his case. The JUSTICE/FAST is our physical statement to the State.

We invite all concerned citizens to join us or to spread the message of the JUSTICE/FAST while you Fast at work, school, or home. On Sunday, August 2 you are also invited to a Rock 'n' Roll/Feast benefit at one of the ballrooms.

We are circulating the attached statement to raise the money necessary for placing a full-page ad in the Detroit Free Press during the JUSTICE/FAST. This ad will be designed to educate the people about the political repression of John Sinclair, and to raise money for his legal defense.

We feel a sense of urgency in undertaking this task. You can express your concern for justice now. Don't give up on John Sinclair....Join the JUSTICE/FAST July 28-31! Help finance the full-page ad; send your donation with the clipped form soon. Thank you. Free John Sinclair!