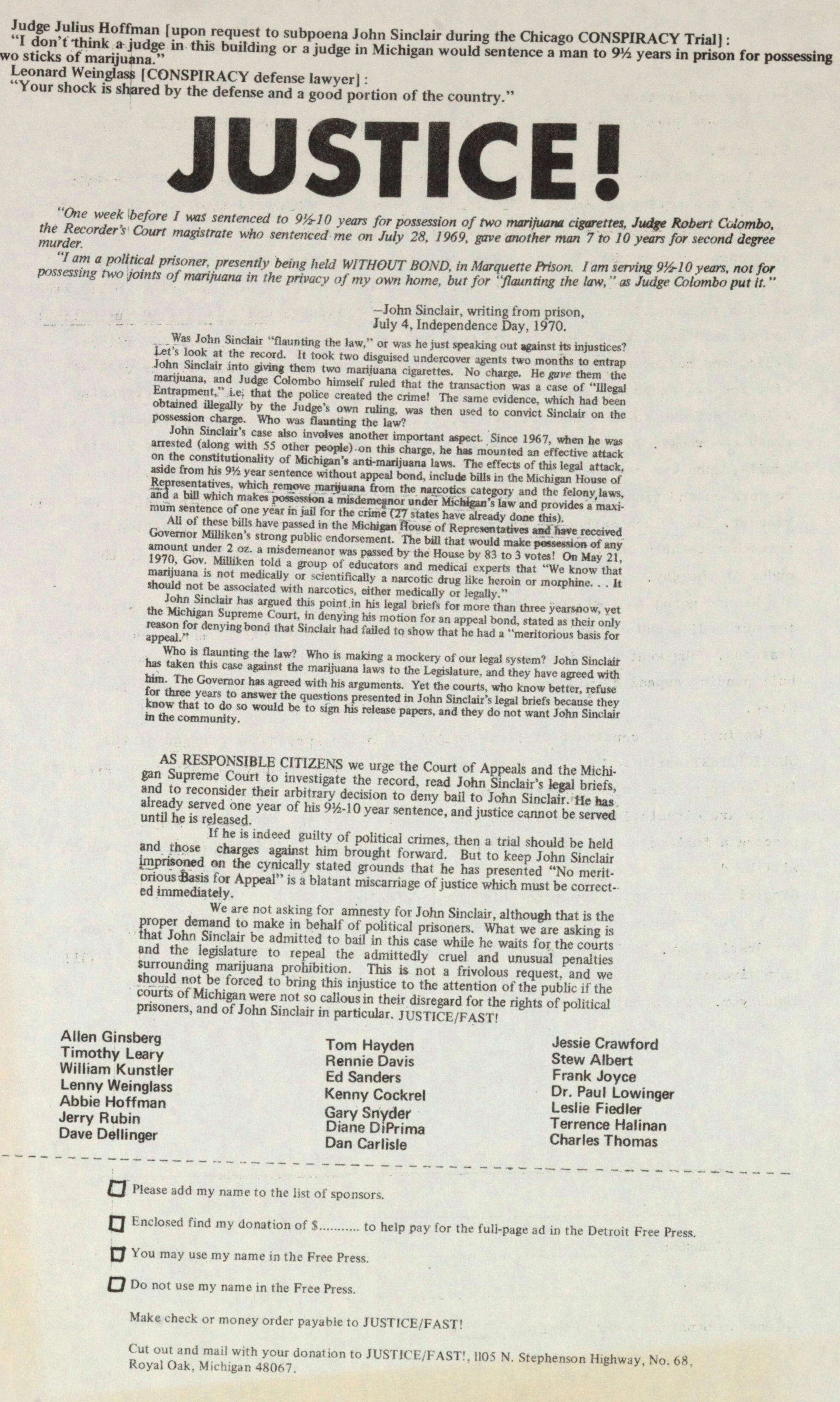 "I don't think a judge in this building or a judge in Michigan would sentence a man to 9 1/2 years in prison for possessing two sticks of marijuana."

"Your shock is shared by the defense and a good portion of the country."

"One week before I was sentenced to 9 1/2-10 years for possession of two marijuana cigarettes, Judge Robert Colombo, the Recorder's Court magistrate who sentenced me on July 28, 1969, gave another man 7 to 10 years for second degree murder.

"I am a political prisoner, presently being held WITHOUT BOND, in Marquette Prison. I am serving 9 1/2-10 years, not for possessing two joints of marijuana in the privacy of my own home, but for "flaunting the law," as Judge Colombo put it."

Was John Sinclair "flaunting the law," or was he just speaking out against its injustices? Let's look at the record. It took two disguised undercover agents two months to entrap John Sinclair into giving them two marijuana cigarettes. No charge. He gave them the marijuana, and Judge Colombo himself ruled that the transaction was a case of "Illegal Entrapment," i.e. that the police created the crime! The same evidence, which had been obtained illegally by the Judge's own ruling, was then used to convict Sinclair on the possession charge. Who was flaunting the law?

John Sinclair's case also involves another important aspect. Since 1967, when he was arrested (along with 55 other people) on this charge, he has mounted an effective attack on the constitutionality of Michigan's anti-marijuana laws. The effects of this legal attack, aside from his 9 1/2 year sentence without appeal bond, include bills in the Michigan House of Representatives, which remove marijuana from the narcotics category and the felony, laws, and a bill which makes possession a misdemeanor under Michigan's law and provides a maximum sentence of one year in jail for the crime (27 states have already done this).

All of these bills have passed in the Michigan House of Representatives and have received Governor Milliken's strong public endorsement. The bill that would make possession of any amount under 2 oz. a misdemeanor was passed by the House by 83 to 3 votes! On May 21, 1970, Gov. Milliken told a group of educators and medical experts that "We know that marijuana is not medically or scientifically a narcotic drug like heroin or morphine... It should not be associated with narcotics, either medically or legally."

John Sinclair has argued this point in his legal briefs for more than three years now, yet the Michigan Supreme Court, in denying his motion for an appeal bond, stated as their only reason for denying bond that Sinclair had failed to show that he had a "meritorious basis for appeal."

Who is flaunting the law? Who is making a mockery of our legal system? John Sinclair has taken this case against the marijuana laws to the legislature, and they have agreed with him. The Governor has agreed with his arguments. Yet the courts, who know better, refuse for three years to answer the questions presented in John Sinclair's legal briefs because they know that to do so would be to sign his release papers, and they do not want John Sinclair in the community.

AS RESPONSIBLE CITIZENS we urge the Court of Appeals and the Michigan Supreme Court to investigate the record, read John Sinclair's legal briefs, and to reconsider their arbitrary decision to deny bail to John Sinclair. He has already served one year of his 9 1/2-10 year sentence , and justice cannot be served until he is released.

If he is indeed guilty of political crimes, then a trial should be held and those charges against him brought forward. But to keep John Sinclair imprisoned on the cynically stated grounds that he has presented "No meritorious Basis for Appeal" is a blatant miscarriage of justice which must be corrected immediately.

We are not asking for amnesty for John Sinclair, although that is the proper demand to make in behalf of political prisoners. What we are asking is that John Sinclair be admitted to bail in this case while he waits for the courts and the legislature to repeal the admittedly cruel and unusual penalties surrounding marijuana prohibition. This is not a frivolous request, and we should not be forced to bring this injustice to the attention of the public if the courts of Michigan were not so callous in their disregard for the rights of political prisoners, and of John Sinclair in particular. JUSTICE/FAST!

Please add my name to the list of sponsors.

You may use my name in the Free Press.

Do not use my name in the Free Press.