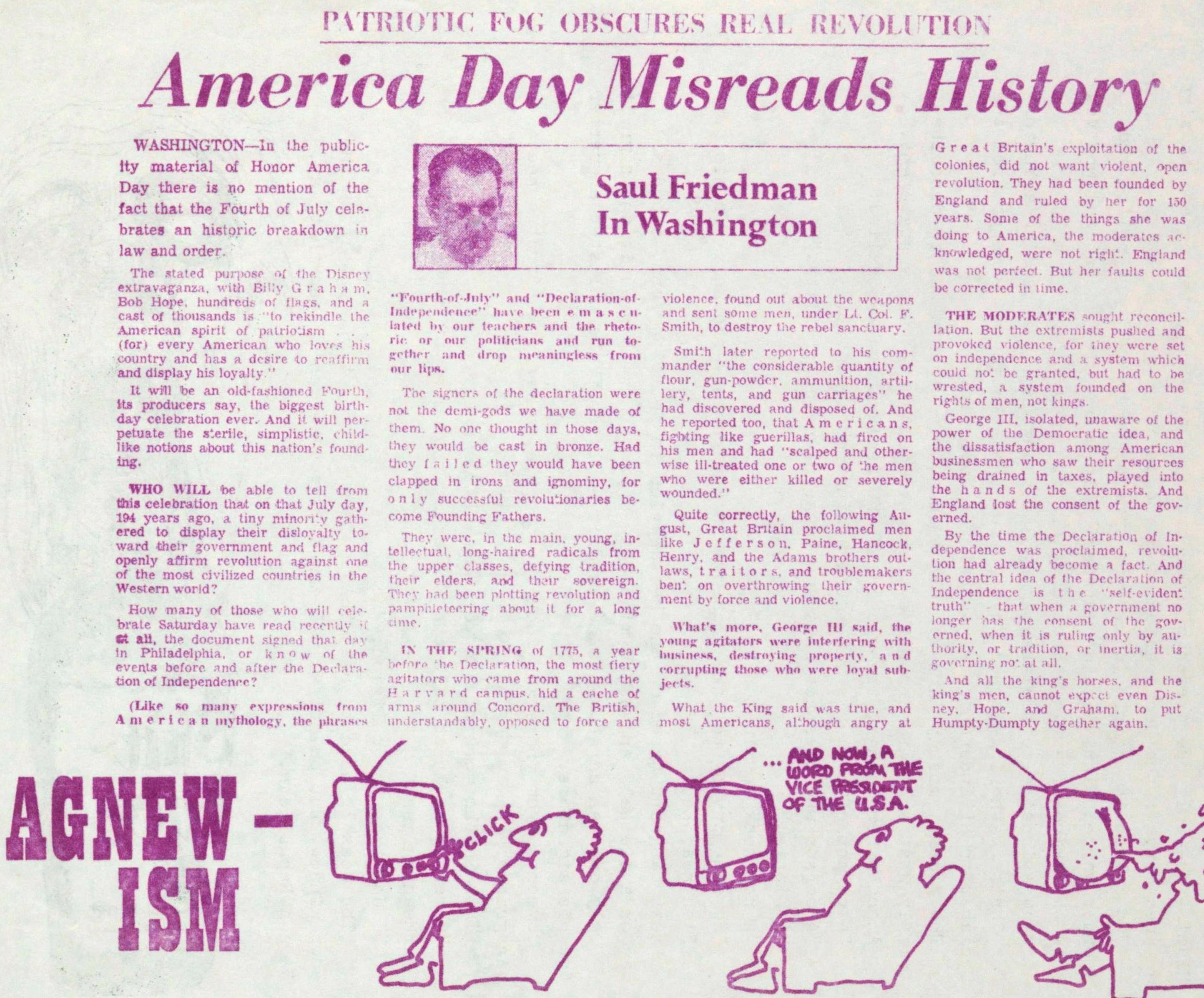 WASHINGTON - In the publicity material of Honor America Day there is no mention of the fact that the Fourth of July celebrates an historic breakdown in law and order.

The stated purpose of the Disney extravaganza, with Billy Graham, Bob Hope, hundreds of flags, and a cast of thousands is "to rekindle the American spirit of patriotism... (for) every American who loves his country and has a desire to reaffirm and display his loyalty."

It will be an old-fashioned Fourth, its producers say, the biggest birthday celebration ever. And it will perpetuate the sterile, simplistic, child-like notions about this nation's founding.

WHO WILL be able to tell from this celebration that on that July day, 194 years ago, a tiny minority gathered to display their disloyalty toward their government and flag and openly affirm revolution against one of the most civilized countries in the Western world?

How many of those who will celebrate Saturday have read recently if at all, the document signed that day in Philadelphia, or know of the events before and after the Declaration of Independence?

(Like so many expressions from American mythology, the phrases "Fourth-of-July" and "Declaration-of-Independence" have been emasculated by our teachers and the rhetoric or our politicians and run together and drop meaningless from our lips.

The signers of the declaration were not the demi-gods we have made of them. No one thought in those days, they would be cast in bronze. Had they failed they would have been clapped in irons and ignominy, for only successful revolutionaries become Founding Fathers.

They were, in the main, young, intellectual, long-haired radicals from the upper classes, defying tradition, their elders, and their sovereign. They had been plotting revolution and pamphleteering about it for a long time.

IN THE SPRING of 1775, a year before the Declaration, the most fiery agitators who came from around the Harvard campus, hid a cache of arms around Concord. The British, understandably, opposed to force and violence, found out about the weapons and sent some men, under Lt. Col. F. Smith, to destroy the rebel sanctuary.

Smith later reported to his commander "the considerable quantity of flour, gun-powder, ammunition, artillery, tents, and gun carriages" he had discovered and disposed of. And he reported too, that Americans, fighting like guerillas, had fired on his men and had "scalped and otherwise ill-treated one or two of the men who were either killed or severely wounded."

Quite correctly, the following August, Great Britain proclaimed men like Jefferson, Paine, Hancock, Henry, and the Adams brothers outlaws, traitors, and troublemakers bent on overthrowing their government by force and violence.

What's more, George III said, the young agitators were interfering with business, destroying property, and corrupting those who were loyal subjects.

What the King said was true, and most Americans, although angry at Great Britain's exploitation of the colonies, did not want violent, open revolution. They had been founded by England and ruled by her for 150 years. Some of the things she was doing to America, the moderates acknowledged, were not right. England was not perfect. But her faults could be corrected in time.

THE MODERATES sought reconciliation. But the extremists pushed and provoked violence, for they were set on independence and a system which could not be granted, but had to be wrested, a system founded on the rights of men, not kings.

George III, isolated, unaware of the power of the Democratic idea, and the dissatisfaction among American businessmen who saw their resources being drained in taxes, played into the hands of the extremists. And England lost the consent of the governed.

And all the king's horses, and the king's men, cannot expect even Disney, Hope, and Graham, to put Humpty-Dumpty together again.