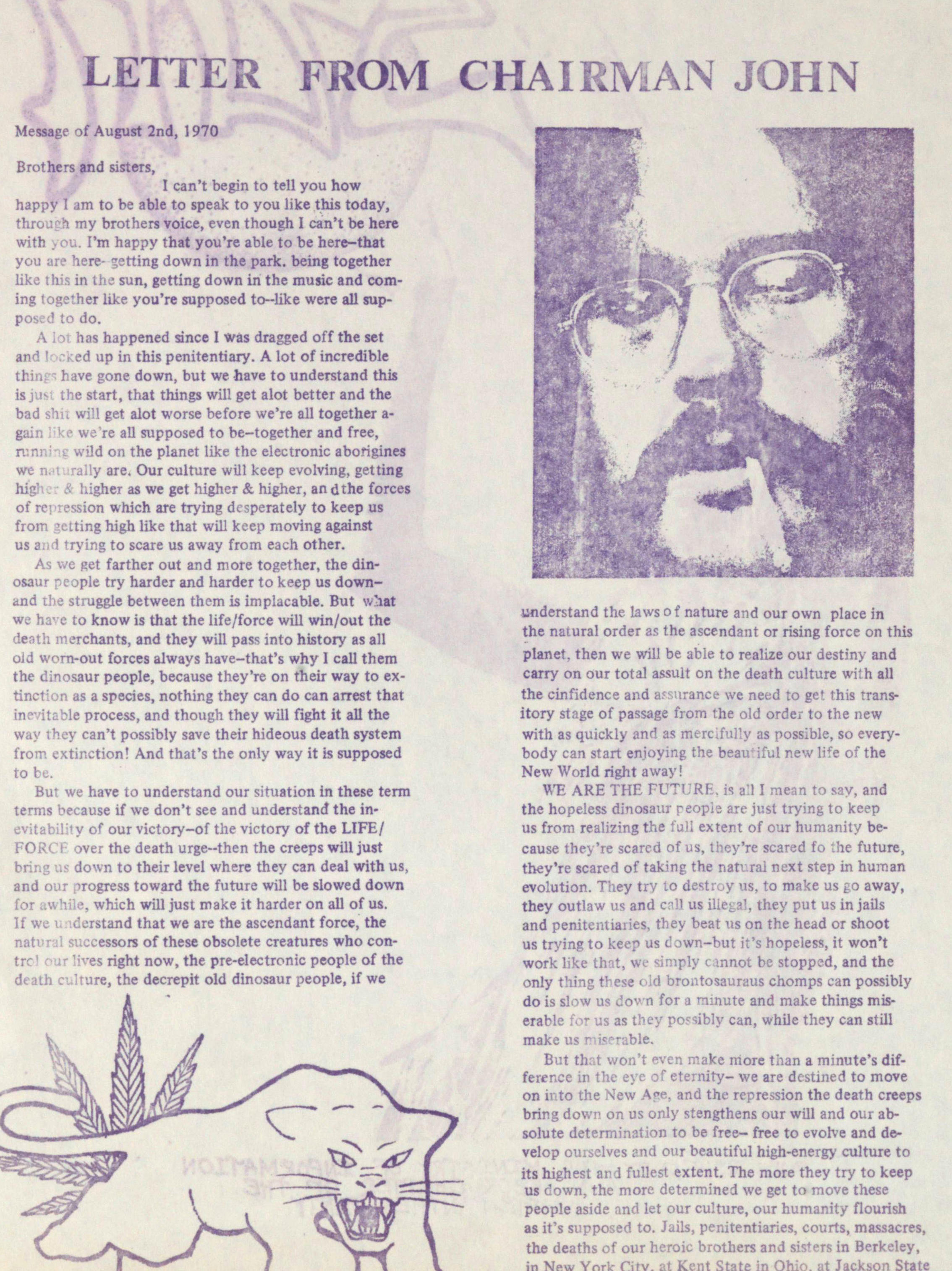 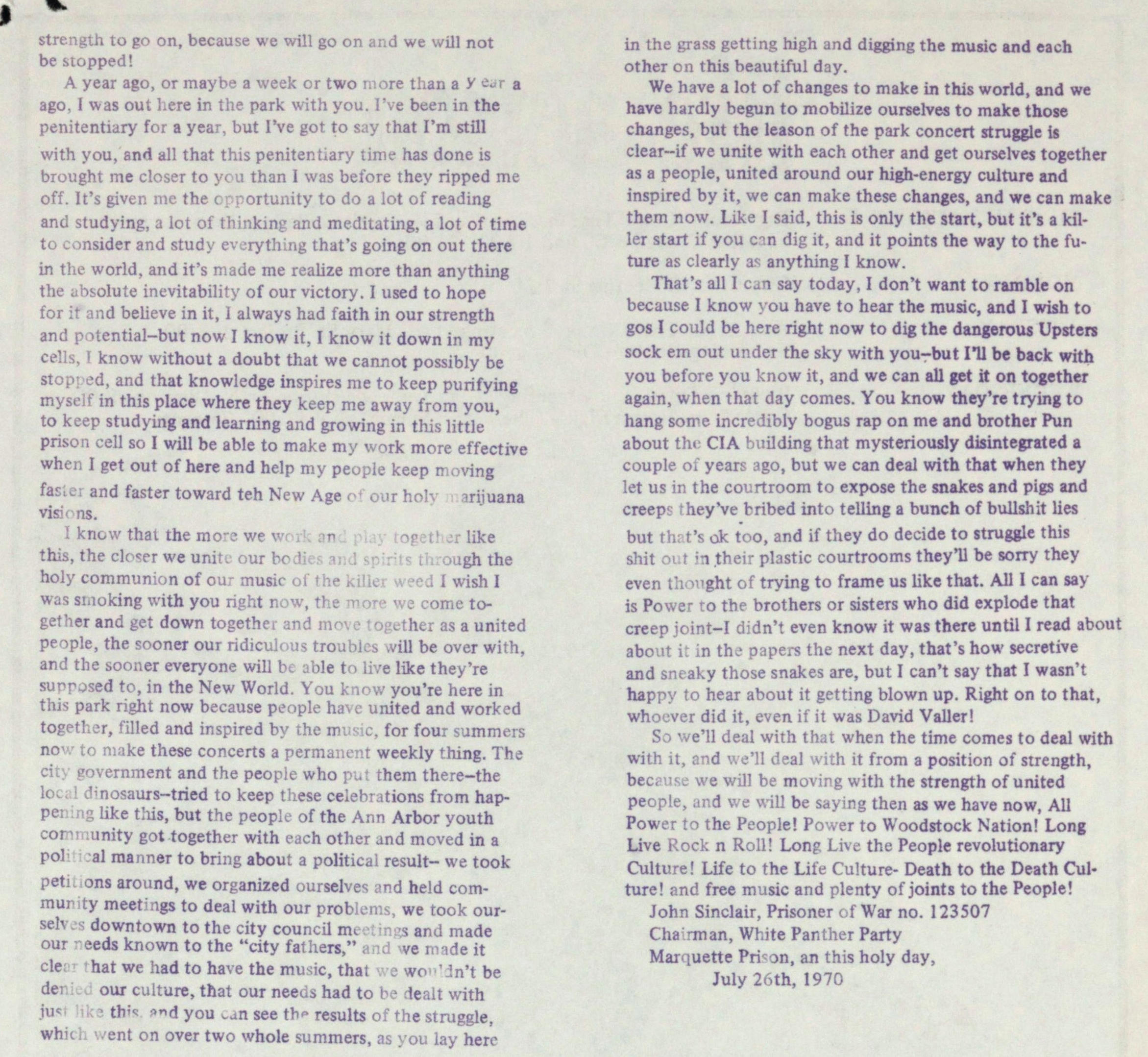 A lot has happened since I was dragged off the set and locked up in this penitentiary. A lot of incredible things have gone down, but we have to understand this is just the start, that things will get alot better and the bad shit will get alot worse before we're all together again like we're all supposed to be - together and free, running wild on the planet like the electronic aborigines we naturally are. Our culture will keep evolving, getting higher & higher as we get higher & higher, and the forces of repression which are trying desperately to keep us from getting high like that will keep moving against us and trying to scare us away from each other.

As we get farther out and more together, the dinosaur people try harder and harder to keep us down - and the struggle between them is implacable. But what we have to know is that the life/force will win/out the death merchants, and they will pass into history as all old worn-out forces always have - that's why I call them the dinosaur people, because they're on their way to extinction as a species, nothing they can do can arrest that inevitable process, and though they will fight it all the way they can't possibly save their hideous death system from extinction! And that's the only way it is supposed to be.

But we have to understand our situation in these term terms because if we don't see and understand the inevitability of our victory - of the victory of the LIFE/FORCE over the death urge--then the creeps will just bring us down to their level where they can deal with us, and our progress toward the future will be slowed down for awhile, which will just make it harder on all of us. If we understand that we are the ascendant force, the natural successors of these obsolete creatures who control our lives right now, the pre-electronic people of the death culture, the decrepit old dinosaur people, if we understand the laws of nature and our own place in the natural order as the ascendant or rising force on this planet, then we will be able to realize our destiny and carry on our total assult on the death culture with all the cinfidence and assurance we need to get this transitory stage of passage from the old order to the new with as quickly and as mercifully as possible, so everybody can start enjoying the beautiful new life of the New World right away!

WE ARE THE FUTURE, is all I mean to say, and the hopeless dinosaur people are just trying to keep us from realizing the full extent of our humanity because they're scared of us, they're scared fo the future, they're scared of taking the natural next step in human evolution. They try to destroy us, to make us go away, they outlaw us and call us illegal, they put us in jails and penitentiaries, they beat us on the head or shoot us trying to keep us down - but it's hopeless, it won't work like that, we simply cannot be stopped, and the only thing these old brontosauraus chomps can possibly do is slow us down for a minute and make things miserable for us as they possibly can, while they can still make us miserable.

But that won't even make more than a minute's difference in the eye of eternity - we are destined to move on into the New Age, and the repression the death creeps bring down on us only strengthens our will and our absolute determination to be free - free to evolve and develop ourselves and our beautiful high-energy culture to its highest and fullest extent. The more they try to keep us down, the more determined we get to move these people aside and let our culture, our humanity flourish as it's supposed to. Jails, penitentiaries, courts, massacres, the deaths of our heroic brothers and sisters in Berkeley, in New York City, at Kent State in Ohio, at Jackson State

strength to go on, because we will go on and we will not be stopped!

A year ago, or maybe a week or two more than a year a ago, I was out here in the park with you. I've been in the penitentiary for a year, but I've got to say that I'm still with you, and all that this penitentiary time has done is brought me closer to you than I was before they ripped me off. It's given me the opportunity to do a lot of reading and studying, a lot of thinking and meditating, a lot of time to consider and study everything that's going on out there in the world, and it's made me realize more than anything the absolute inevitability of our victory. I used to hope for it and believe in it, I always had faith in our strength and potential - but now I know it, I know it down in my cells, I know without a doubt that we cannot possibly be stopped, and that knowledge inspires me to keep purifying myself in this place where they keep me away from you, to keep studying and learning and growing in this little prison cell so I will be able to make my work more effective when I get out here and help my people keep moving faster and faster toward teh New Age of our holy marijuana visions.

I know that the more we work and play together like this, the closer we unite our bodies and spirits through the holy communion of our music of the killer weed I wish I was smoking with you right now, the more we come together and get down together and move together as a united people, the sooner our ridiculous troubles will be over with, and the sooner everyone will be able to live like they're supposed to, in the New World. You know you're here in this park right now because people have united and worked together, filled and inspired by the music, for four summers now to make these concerts a permanent weekly thing. The city government and the people who put them there - the local dinosaurs - tried to keep these celebrations from happening like this, but the people of the Ann Arbor youth community got together with each other and moved in a political manner to bring about a political result - we took petitions around, we organized ourselves and held community meetings to deal with our problems, we took ourselves downtown to the city council meetings and made our needs known to the "city fathers," and we made it clear that we had to have the music, that we wouldn't be denied our culture, that our needs had to be dealt with just like this, and you can see the results of the struggle, which went on over two whole summers, as you lay here in the grass getting high and digging the music and each other on this beautiful day.

We have a lot of changes to make in this world, and we have hardly begun to mobilize ourselves to make those changes, but the leason of the park concert struggle is clear -- if we unite with each other and get ourselves together as a people, united around our high-energy culture and inspired by it, we can make these changes, and we can make them now. Like I said, this is only the start, but it's a killer start if you can dig it, and it points the way to the future as clearly as anything I know.

That's all I can say today, I don't want to ramble on because I know you have to hear the music, and I wish to gos I could be here right now to dig the dangerous Upsters sock em out under the sky with you - but I'll be back with you before you know it, and we can all get it on together again, when that day comes. you know they're trying to hang some incredibly bogus rap on me and brother Pun about the CIA building that mysteriously disintegrated a couple of years ago, but we can deal with that when they let us in the courtroom to expose the snakes and pigs and creeps they've bribed into telling a bunch of bullshit lies but that's ok too, and if they do decide to struggle this shit out in their plastic courtrooms they'll be sorry they even thought of trying to frame us like that. All I can say is Power to the brothers or sisters who did explode that creep joint - I didn't even know it was there until I read about about it in the papers the next day, that's how secretive and sneaky those snakes are, but I can't say that I wasn't happy to hear about it getting blown up. Right on to that, whoever did it, even if it was David Valler!