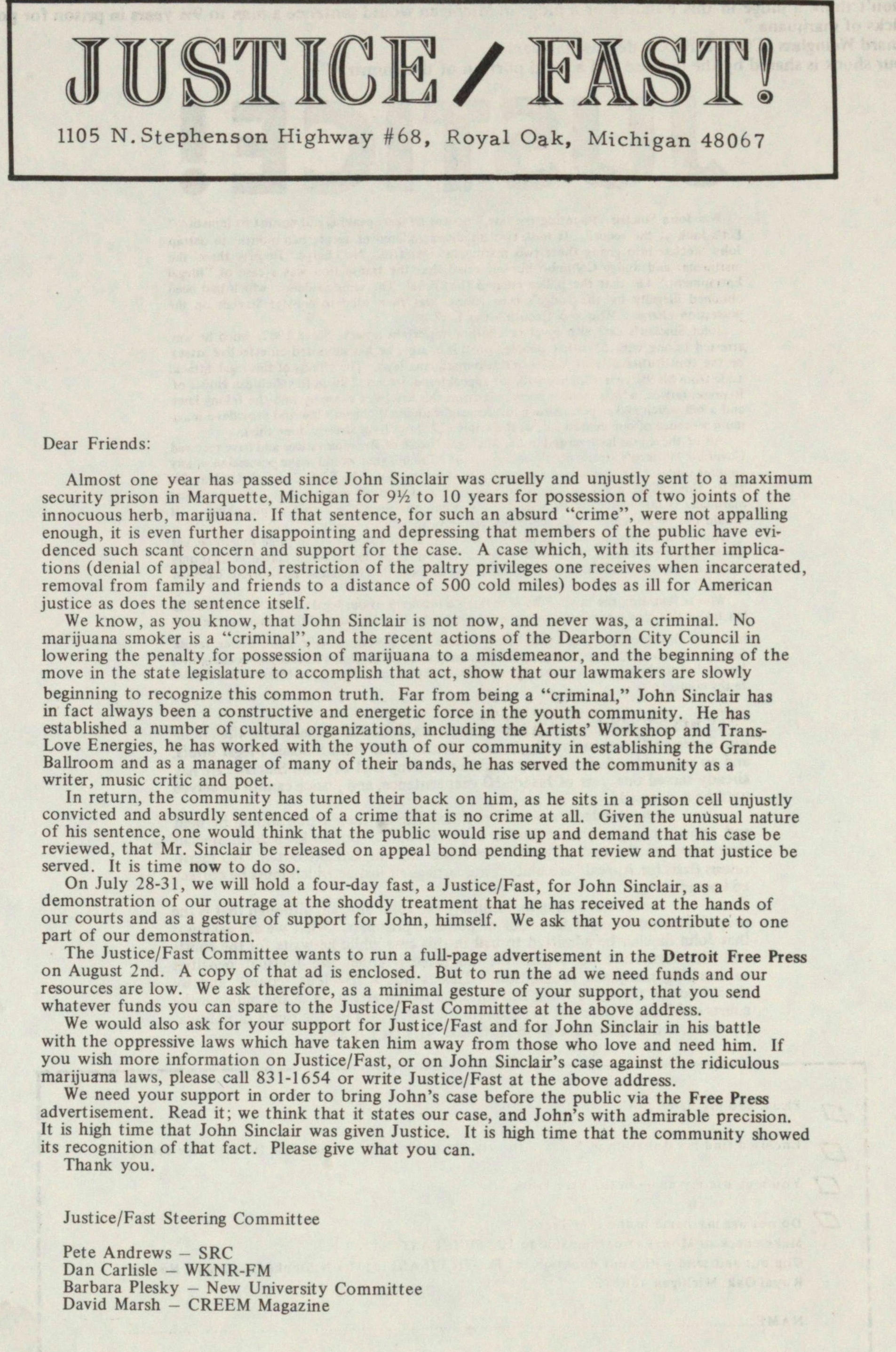 Almost one year has passed since John Sinclair was cruelly and unjustly sent to a maximum security prison in Marquette, Michigan for 9 1/2 to 10 years for possession of two joints of the innocuous herb, marijuana. If that sentence, for such an absurd "crime", were not appalling enough, it is even further disappointing and depressing that members of the public have evidenced such scant concern and support for the case. A case which, with its further implications (denial of appeal bond, restriction of the paltry privileges one receives when incarcerated, removal from family and friends to a distance of 500 cold miles) bodes as ill for American justice as does the sentence itself.

We know, as you know, that John Sinclair is not now, and never was, a criminal. No marijuana smoker is a "criminal", and the recent actions of the Dearborn City Council in lowering the penalty for possession of marijuana to a misdemeanor, and the beginning of the move in the state legislature to accomplish that act, show that our lawmakers are slowly beginning to recognize this common truth. Far from being a "criminal," John Sinclair has in fact always been a constructive and energetic force in the youth community. He has established a number of cultural organizations, including the Artists' Workshop and TransLove Energies, he has worked with the youth of our community in establishing the Grande Ballroom and as a manager of many of their bands, he has served the community as a writer, music critic and poet.

In return, the community has turned their back on him, as he sits in a prison cell unjustly convicted and absurdly sentenced of a crime that is no crime at all. Given the unusual nature of his sentence, one would think that the public would rise up and demand that his case be reviewed, that Mr. Sinclair be released on appeal bond pending that review and that justice be served. It is time now to do so.

On July 28-31, we will hold a four-day fast, a Justice/Fast, for John Sinclair, as a demonstration of our outrage at the shoddy treatment that he has received at the hands of our courts and as a gesture of support for John, himself. We ask that you contribute to one part of our demonstration.

We would also ask for your support for Justice/Fast and for John Sinclair in his battle with the oppressive laws which have taken him away from those who love and need him. If you wish more information on Justice/Fast, or on John Sinclair's case against the ridiculous marijuana laws, please cali 831-1654 or write Justice/Fast at the above address.

We need your support in order to bring John's case before the public via the Free Press advertisement. Read it; we think that it states our case, and John's with admirable precision. It is high time that John Sinclair was given Justice. It is high time that the community showed its recognition of that fact. Please give what you can.