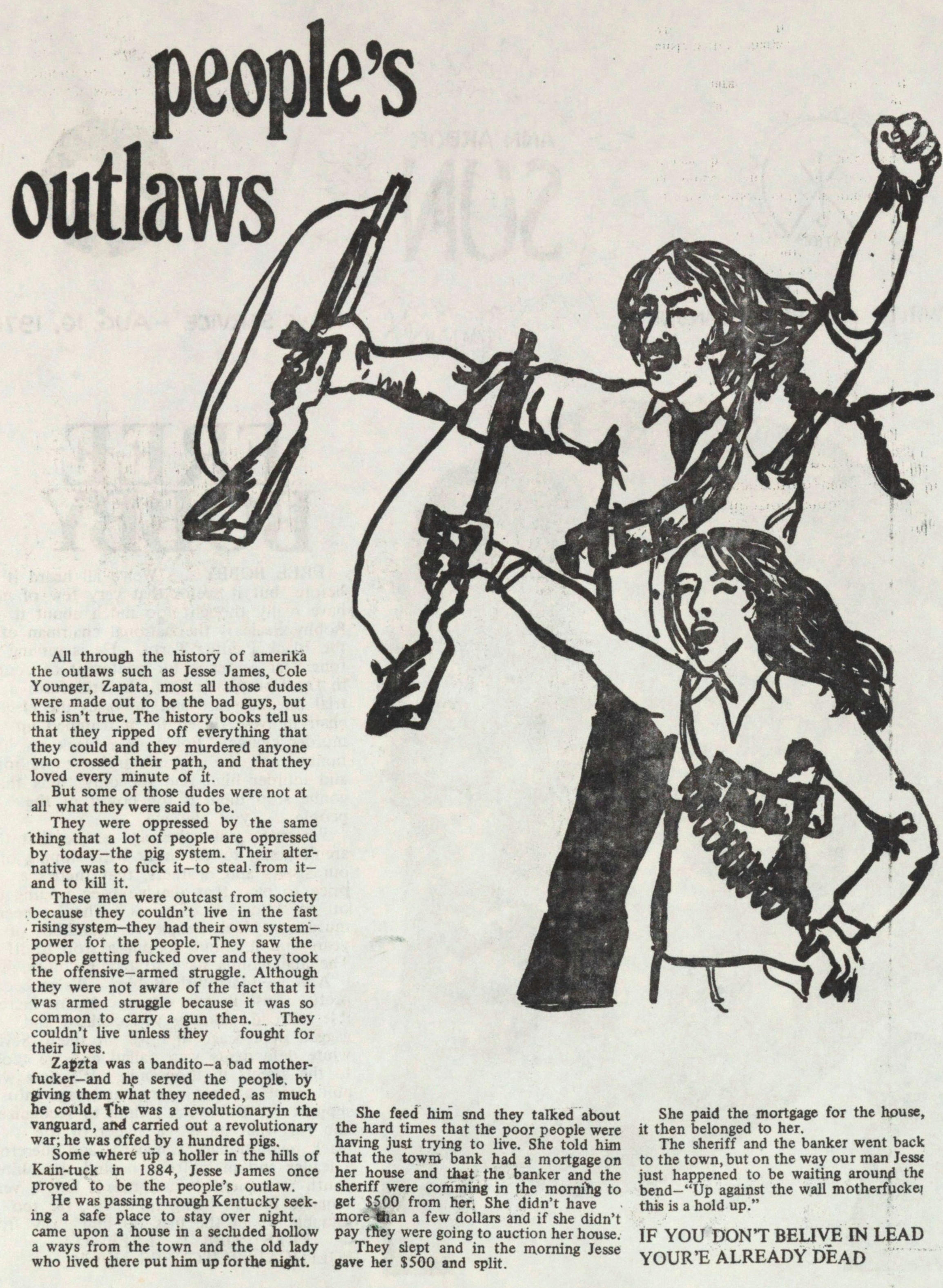 All through the history of amerik'a the outlaws such as Jesse James, Cole Younger, Zapata, most all those dudes were made out to be the bad guys, but this isn't true. The history bopks teil us that they ripped off everything that they could and they murdered anyone who crossed their path, and that they loved every minute of it. But some of those dudes were not at all what they were said to be. They were oppressed by the same thing that a lot of people are oppressed by today- the pig system. Theii alternative was to fuck it-to steal from it- and to kill it. These men were outcast from society because they couldn't live in the fast rising system- they had their own system- power for the people. They saw the people getting fucked over and they took the offensive-armed struggle. Although they were not aware of the fact that it was armed struggle because it was so common to carry a gun then. They couldn't live unless they fought for their lives. Zapzta was a bandito-a bad motherfucker- and he served the people. by giving them what they needed, as much he could. The was a revolutionaryin the vanguard, and carried out a revolutionary war; he was offed by a hundred pigs. Some where up a holler in the hills of Kain-tuck in 1884, Jesse James once proved to be the people's outlaw. He was passing through Kentucky seeking a safe place to stay over night. carne upon a house in a secluded hollow a ways from the town and the old lady who lived there put him up for the night. She feed hiiñ snd they talked about the hard times that the poor people were having just trying to live. She told him that the towro bank had a mortgageon her house and that the banker and the sheriff were comming in the mornihg to get $500 from her. She didn't have morelhan a few dollars and if she didn't pay tRey were going to auction her house. They slept and in the morning Jesse gave her $500 and split. She paid the mortgage for the house, it then belonged to her. The sheriff and the banker went back to the town.but on the way our man Jesst just happened to be waiting around th bend-"Up against the wall motherfuckei this is a hold up." IF YOU DONT BELIVE IN LEAD YOUR'E ALREADY DEAD