You Put Our Town On The Map! 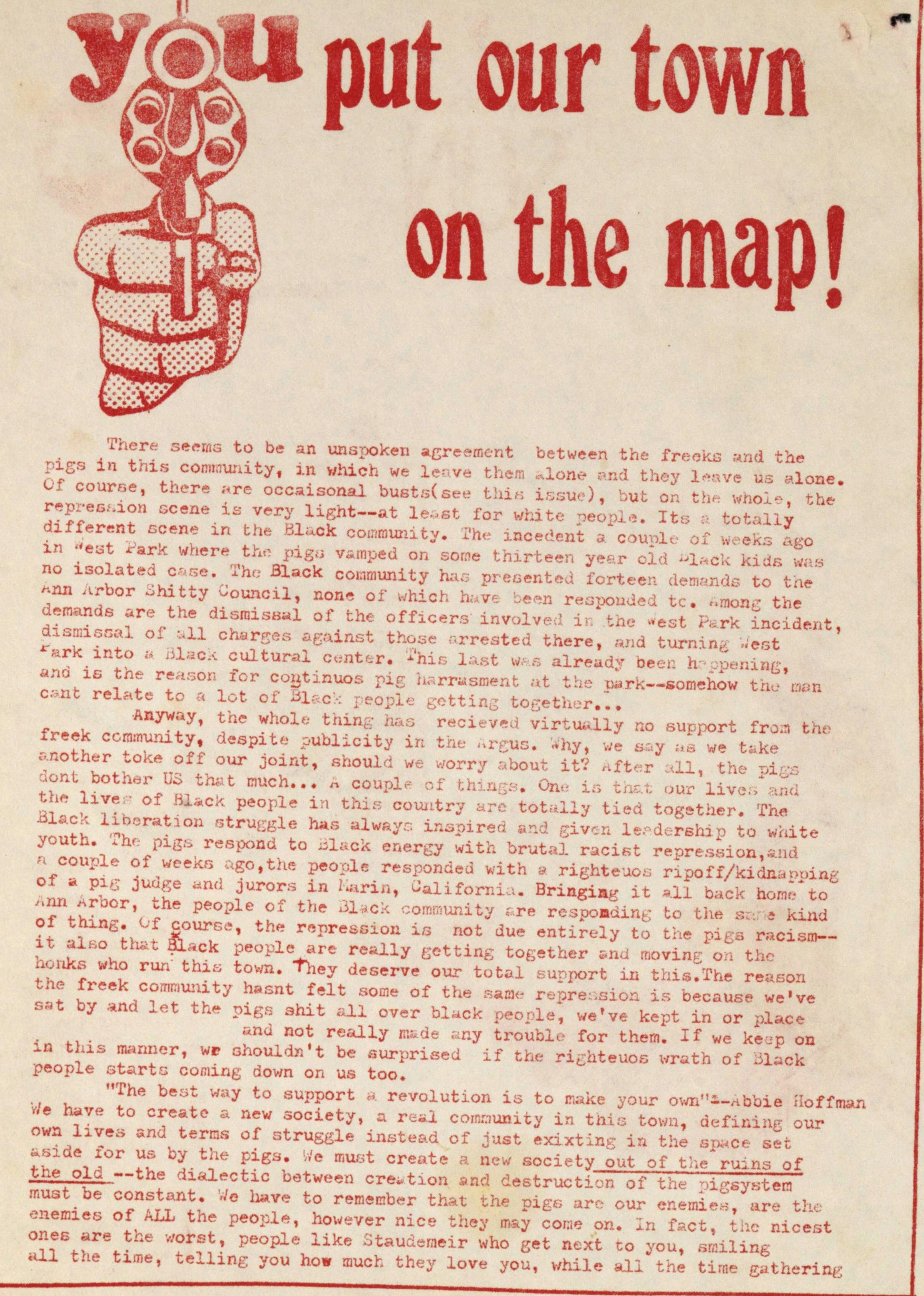 you put our town on the map!

There seems to be an unspoken agreement between the freeks and the pigs in the community, In which we leave them alone and they leave us alone. Of course, there re occaisonal busts (see this issue), but on the whole, the repression scene is very light – at least for white people. lts a totally different scene in the Black community. The incedent a couple of weeks ago in West Park where the pigs vamped on some thirteen year old Black kid was no isolated case. The Black community has presented fourteen demands to Ann Arbor Shitty Council. none of which have been responded to. Among the demands are the dismissal of the officers involved in the West Park incident, dismissal of all charges against those arrested there, and turning West Park into a Black cultural center. This last was already been happening and is the reason for continuous pig harassment at the park – somehow the men can't relate to a lot of Black people getting together...

Anyway, the whole thing has recieved virtually no support from the freek community, despite publicity in the Argus. Why, we say as we take another toke off our joint, should we worry about it? After all, the pigs don't bother US that much. . . A couple of things . One, is that our lives and the lives of  Black people in this country are totally tied together. The Black liberation struggle has always inspired and given leadership to white youth. The pigs respond to Black energy with brutal racist repression, and, a couple of weeks ago, the people responded with a righteous ripoff/kidnapping of a pig judge and jurors in Marin, California. Bringing it all back home to Ann Arbor, the people of the Black community are really getting together and moving on the honks that run this town. They deserve our total support in this. The reason the freek community hasn't felt some of the same repression is because we've sat by and let the pigs shit all over black people, we've kept in or place and not really made any trouble for them. If we keep on in this manner, we shouldn't be surprised if the righteuos wrath of Black people starts coming down on us too.

"The best way to support a revolution is to make your own" – Abbie Hoffman. We have to create a new society, a real community in this town, defining our own lives and terms of struggle instead of just existing in the space set aside for us by the pigs. We must create a new society out of the ruins of the old – the dialectic between creation and destruction of the pigsytem must be constant. We have to remember that the pigs are our enemies, are the enemies of ALL the people, however nice they may come on. In fact, the nicest ones are the worst, people like Staudemeir who get next to you, smiling all the time, telling you how much they love you, while all the time gathering information for files and future busts. The University of Michigan sits intact in the middle of our territory, a center of imperialism where they make neat little things like the infra red tracing device that killed Che Geuvera. Our brothers and sisters are turning to smack instead of revolution, maybe because the concept of revolution is still abstract to them. What we have to do is make it a reality on all levels, starting with things like the tribal councils and making them really a basis for the community, and going on from there. We should learn from our sisters and brothers in places like Berkley, Isla Vista, Boston, who have followed the example of the Blacks and the Vietcong and are taking the struggle to a higher level- moving into the streets and beyond into firebombing pig and pig institutions and businesses, all the time building togetherness and tightness with each other as the fight grows, and the need for that love of each other grows. It's time we injected some of that same love and energy into our own lives, its time we started figuring out where we should move – its time to put our town in the map! !