Free All Prisoners Of War! 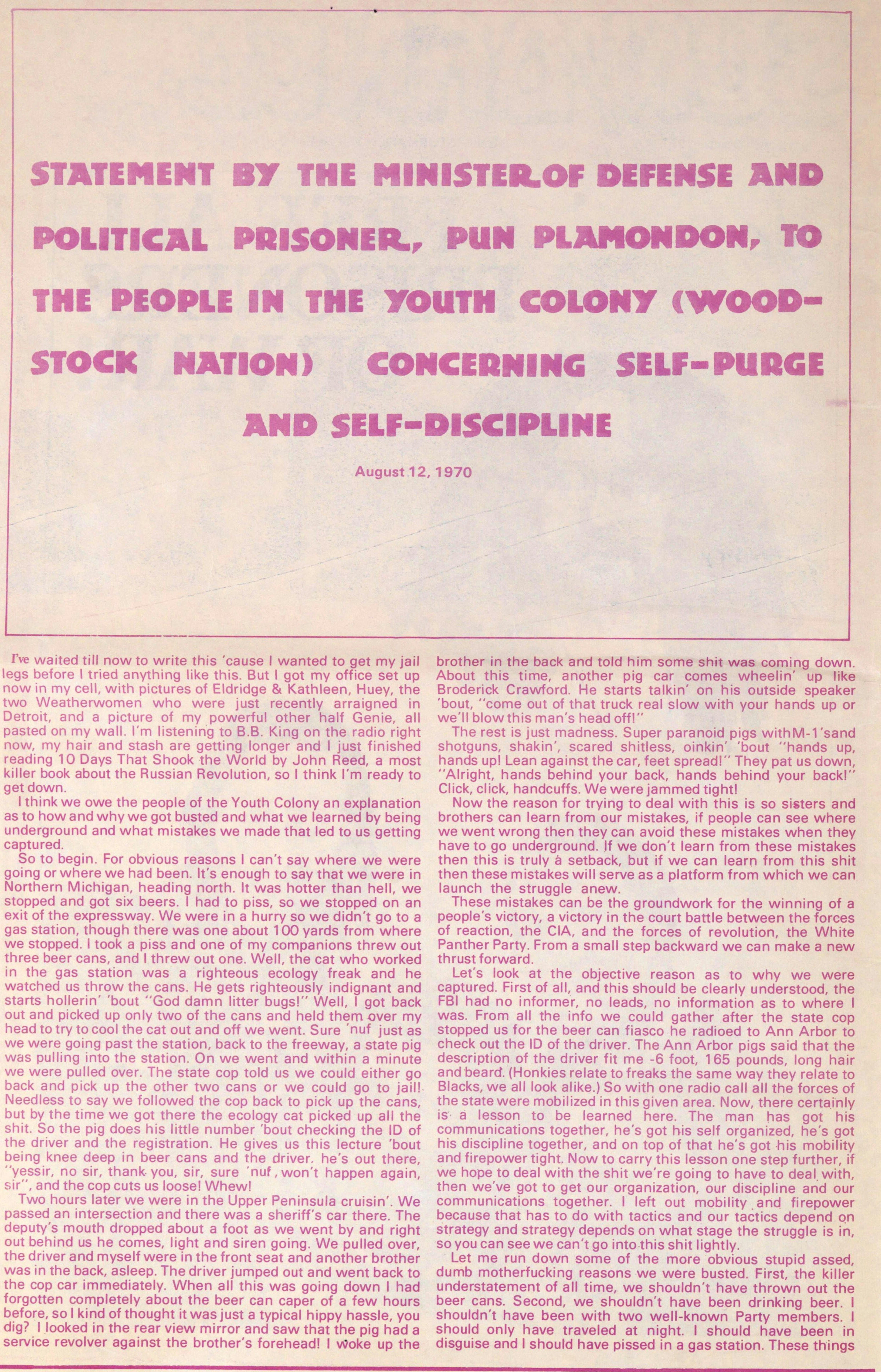 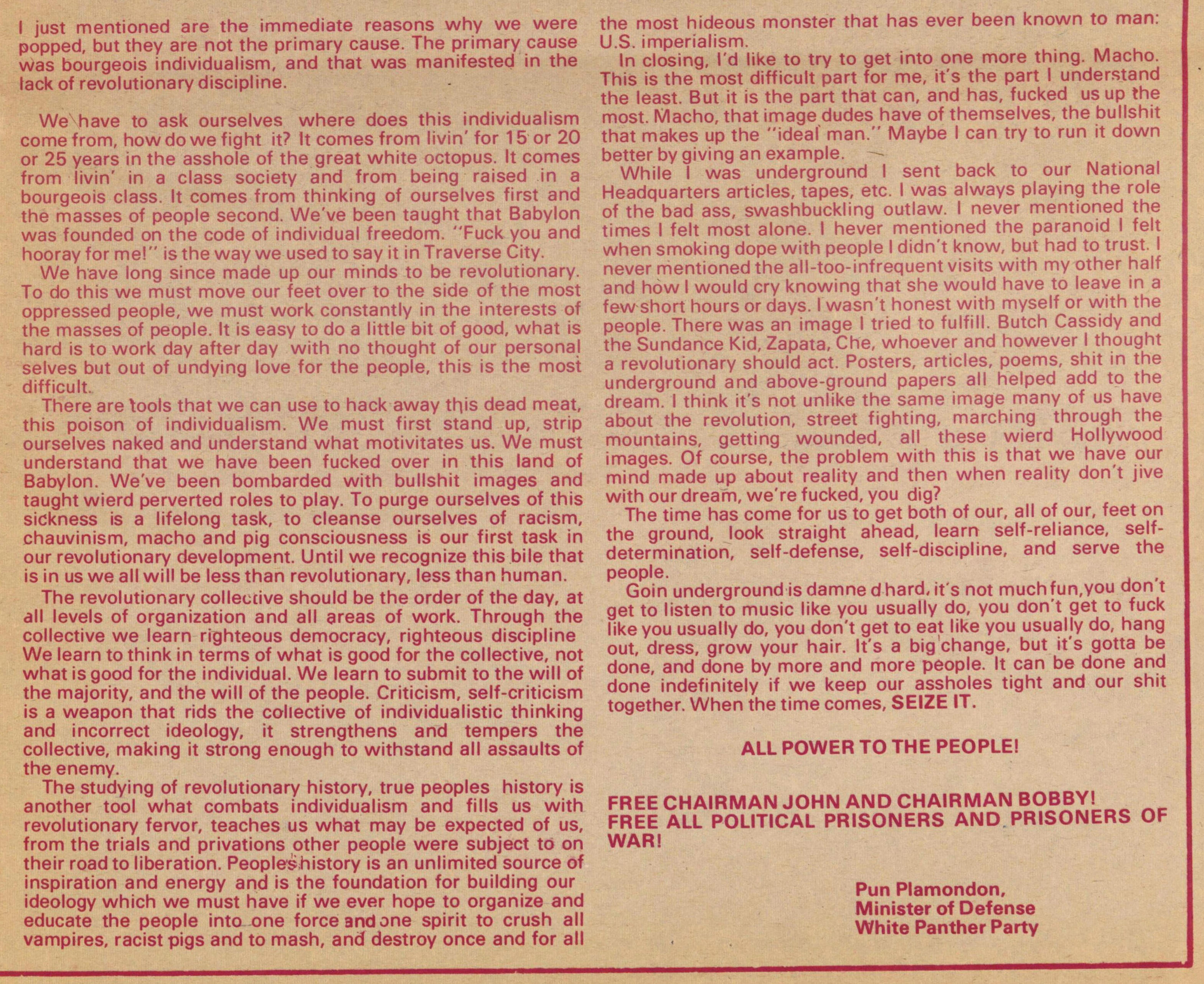 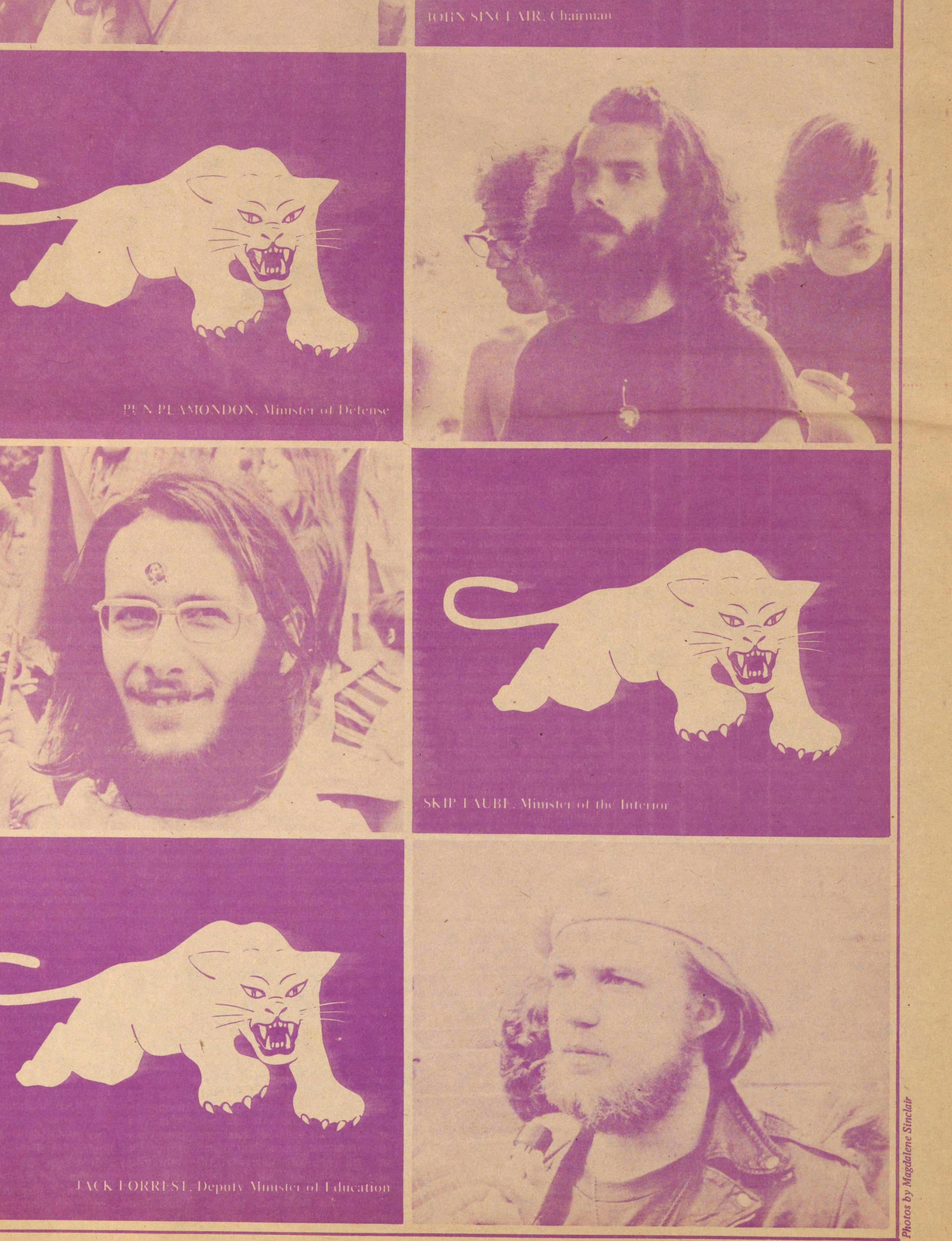 FREE ALL PRISONERS OF WAR!

STATEMENT BT THE MINISTER OF DEFENSE AND POLITICAL PRISONER., PUN PLAMONDON, TO THE PEOPLE IN THE YOUTH COLONY (WOODSTOCK NATION) CONCERNING SELF-PURGE AND SELF-DISCIPLINE
August 12, 1970

I've waited till now to write this 'cause I wanted to get my jail legs before I tried anything like this. But I got my office set up now in my cell, with pictures of Eldridge & Kathleen, Huey, the two Weatherwomen who were just recently arraigned in Detroit, and a picture of my powerful other half Genie, all pasted on my wall. I'm listening to B.B. King on the radio right now, my hair and stash are getting longer and I just finished reading 10 Days That Shook the World by John Reed, a most killer book about the Russian Revolution, so I think I'm ready to get down.

I think we owe the people of the Youth Colony an explanation as to how and why we got busted and what we learned by being underground and what mistakes we made that led to us getting captured.

So to begin. For obvious reasons I can't say where we were going or where we had been. It's enough to say that we were in Northern Michigan, heading north. It was hotter than hell, we stopped and got six beers. I had to piss, so we stopped on an exit of the expressway. We were in a hurry so we didn't go to a gas station, though there was one about 100 yards from where we stopped. I took a piss and one of my companions threw out three beer cans, and I threw out one. Well, the cat who worked in the gas station was a righteous ecology freak and he watched us throw the cans. He gets righteously indignant and starts hollerin' 'bout "God damn litter bugs!" Well, I got back out and picked up only two of the cans and held them over my head to try to cool the cat out and off we went. Sure 'nuf just as we were going past the station, back to the freeway, a state pig was pulling into the station. On we went and within a minute we were pulled over. The state cop told us we could either go back and pick up the other two cans or we could go to jail! Needless to say we followed the cop back to pick up the cans, but by the time we got there the ecology cat picked up all the shit. So the pig does his little number 'bout checking the ID of the driver and the registration. He gives us this lecture 'bout being knee deep in beer cans and the driver, he's out there, "yessir, no sir, thank you, sir, sure 'nuf, won't happen again, sir", and the cop cuts us loose! Whew!

Two hours later we were in the Upper Peninsula cruisin'. We passed an intersection and there was a sheriff's car there. The deputy's mouth dropped about a foot as we went by and right out behind us he comes, light and siren going. We pulled over, the driver and myself were in the front seat and another brother was in the back, asleep. The driver jumped out and went back to the cop car immediately. When all this was going down I had forgotten completely about the beer can caper of a few hours before, so I kind of thought it was just a typical hippy hassle, you dig? I looked in the rear view mirror and saw that the pig had a service revolver against the brother's forehead! I woke up the brother in the back and told him some shit was coming down. About this time, another pig car comes wheelin' up like Broderick Crawford. He starts talkin' on his outside speaker 'bout, "come out of that truck real slow with your hands up or we'll blow this man's head off!"

These mistakes can be the groundwork for the winning of a people's victory, a victory in the court battle between the forces of reaction, the CIA, and the forces of revolution, the White Panther Party. From a small step backward we can make a new thrust forward.

Let's look at the objective reason as to why we were captured. First of all, and this should be clearly understood, the FBI had no informer, no leads, no information as to where I was. From all the info we could gather after the state cop stopped us for the beer can fiasco he radioed to Ann Arbor to check out the ID of the driver. The Ann Arbor pigs said that the description of the driver fit me -6 foot, 165 pounds, long hair and beard. (Honkies relate to freaks the same way they relate to Blacks, we all look alike.) So with one radio call all the forces of the state were mobilized in this given area. Now, there certainly is a lesson to be learned here. The man has got his communications together, he's got his self organized, he's got his discipline together, and on top of that he's got his mobility and firepower tight. Now to carry this lesson one step further, if we hope to deal with the shit we're going to have to deal with, then we've got to get our organization, our discipline and our communications together. I left out mobility and firepower because that has to do with tactics and our tactics depend on strategy and strategy depends on what stage the struggle is in, so you can see we can't go into this shit lightly.

Let me run down some of the more obvious stupid assed, dumb motherfucking reasons we were busted. First, the killer understatement of all time, we shouldn't have thrown out the beer cans. Second, we shouldn't have been drinking beer. I shouldn't have been with two well-known Party members. I should only have traveled at night. I should have been in disguise and I should have pissed in a gas station. These things I just mentioned are the immediate reasons why we were popped, but they are not the primary cause. The primary cause was bourgeois individualism, and that was manifested in the lack of revolutionary discipline.

We have to ask ourselves where does this individualism come from, how do we fight it? It comes from livin' for 15 or 20 or 25 years in the asshole of the great white octopus. It comes from livin' in a class society and from being raised in a bourgeois class. It comes from thinking of ourselves first and the masses of people second. We've been taught that Babylon was founded on the code of individual freedom. "Fuck you and hooray for me!" is the way we used to say it in Traverse City.

We have long since made up our minds to be revolutionary. To do this we must move our feet over to the side of the most oppressed people, we must work constantly in the interests of the masses of people. It is easy to do a little bit of good, what is hard is to work day after day with no thought of our personal selves but out of undying love for the people, this is the most difficult.

There are tools that we can use to hack away this dead meat, this poison of individualism. We must first stand up, strip ourselves naked and understand what motivates us. We must understand that we have been fucked over in this land of Babylon. We've been bombarded with bullshit images and taught weird perverted roles to play. To purge ourselves of this sickness is a lifelong task, to cleanse ourselves of racism, chauvinism, macho and pig consciousness is our first task in our revolutionary development. Until we recognize this bile that is in us we all will be less than revolutionary, less than human.

The studying of revolutionary history, true peoples history is another tool what combats individualism and fills us with revolutionary fervor, teaches us what may be expected of us, from the trials and privations other people were subject to on their road to liberation. People's history is an unlimited source of inspiration and energy and is the foundation for building our ideology which we must have if we ever hope to organize and educate the people into one force and one spirit to crush all vampires, racist pigs and to mash, and destroy once and for all the most hideous monster that has ever been known to man: U.S. imperialism.

In closing, I'd like to try to get into one more thing. Macho. This is the most difficult part for me, it's the part I understand the least. But it is the part that can, and has, fucked us up the most. Macho, that image dudes have of themselves, the bullshit that makes up the "ideal man." Maybe I can try to run it down better by giving an example.

While I was underground I sent back to our National Headquarters articles, tapes, etc. I was always playing the role of the bad ass, swashbuckling outlaw. I never mentioned the times I felt most alone. I never mentioned the paranoid I felt when smoking dope with people I didn't know, but had to trust. I never mentioned the all-too-infrequent visits with my other half and how I would cry knowing that she would have to leave in a few short hours or days. I wasn't honest with myself or with the people. There was an image I tried to fulfill. Butch Cassidy and the Sundance Kid, Zapata, Che, whoever and however I thought a revolutionary should act. Posters, articles, poems, shit in the underground and above-ground papers all helped add to the dream. I think it's not unlike the same image many of us have about the revolution, street fighting, marching through the mountains, getting wounded, all these weird Hollywood images. Of course, the problem with this is that we have our mind made up about reality and then when reality don't jive with our dream, we're fucked, you dig?

The time has come for us to get both of our, all of our, feet on the ground, look straight ahead, learn self-reliance, self-determination, self-defense, self-discipline, and serve the people.

SKIP TAUBE, Minister of the Interior