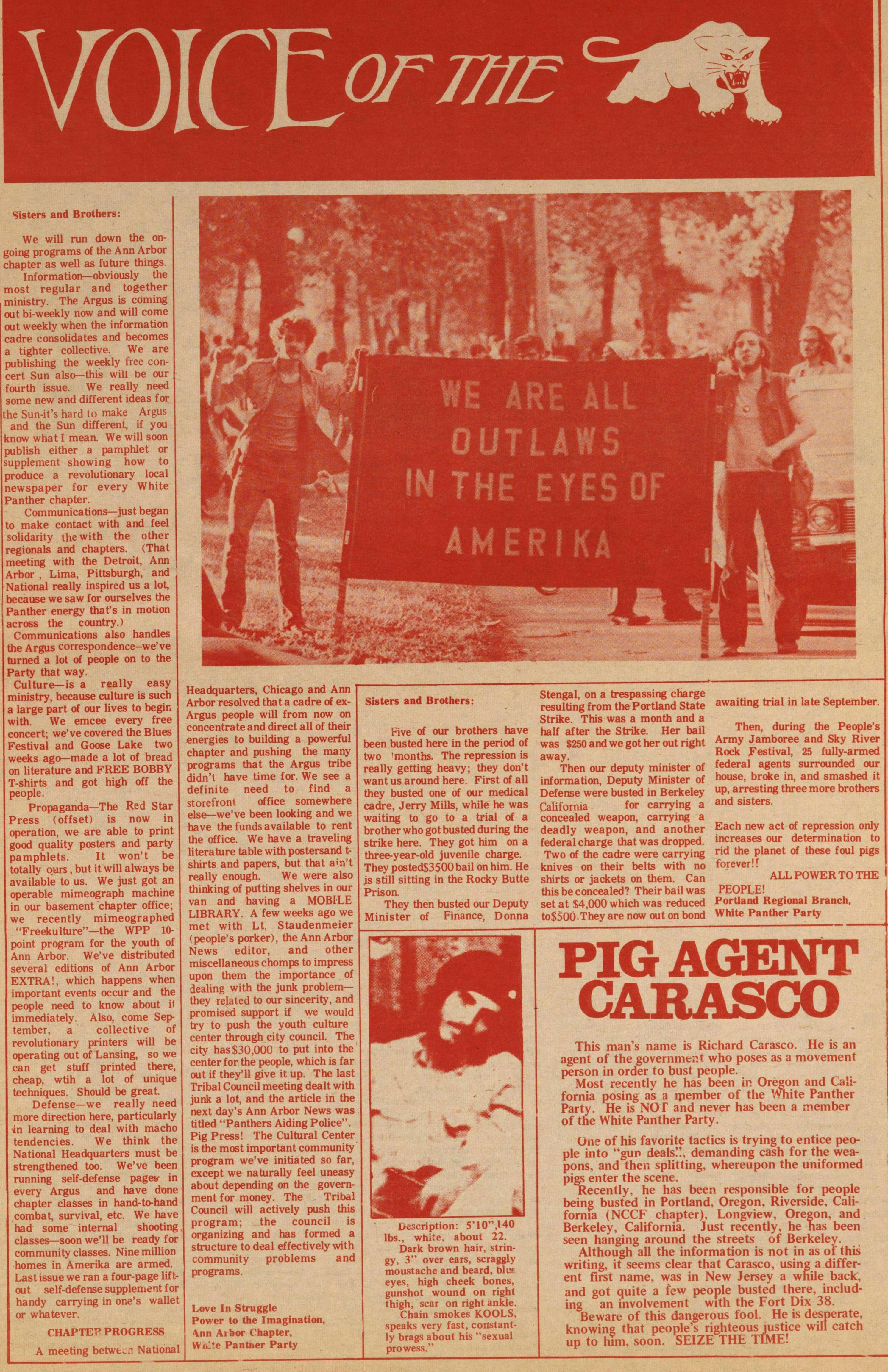 VOICE OF THE WHITE PANTHER

We will run down the ongoing programs of the Ann Arbor chapter as well as future things.

Information--obviously the most regular and together ministry. The Argus is coming out bi-weekly now and will come out weekly when the information cadre consolidates and becomes a tighter collective. We are publishing the weekly free concert Sun also--this will be our fourth issue. We really need some new and different ideas for the Sun--it's hard to make Argus and the Sun different, if you know what I mean. We will soon publish either a pamphlet or supplement showing how to produce a revolutionary local newspaper for every White Panther chapter.

Communications--just began to make contact with and feel solidarity the with the other regionals and chapters. (That meeting with the Detroit, Ann Arbor, Lima, Pittsburgh, and National really inspired us a lot, because we saw for ourselves the Panther energy that's in motion across the country.)

Communications also handles the Argus correspondence--we've turned a lot of people on to the Party that way.

Culture--is a really easy ministry, because culture is such a large part of our lives to begin with. We emcee every free concert; we've covered the Blues Festival and Goose Lake two weeks ago--made a lot of bread on literature and FREE BOBBY T-shirts and got high off the people.

Propaganda--The Red Star Press (offset) is now in operation, we are able to print good quality posters and party pamphlets. It won't be totally ours, but it will always be available to us. We just got an operable mimeograph machine in our basement chapter office; we recently mimeographed "Freekulture"--the WPP 10-point program for the youth of Ann Arbor. We've distributed several editions of Ann Arbor EXTRA!, which happens when important events occur and the people need to know about it immediately. Also, come September, a collective of revolutionary printers will be operating out of Lansing, so we can get stuff printed there, cheap, with a lot of unique techniques. Should be great.

Defense--we really need more direction here, particularly in learning to deal with macho tendencies. We think the National Headquarters must be strengthened too. We've been running self-defense pages in every Argus and have done chapter classes in hand-to-hand combat, survival, etc. We have had some internal shooting classes--soon we'll be ready for community classes. Nine million homes in Amerika are armed. Last issue we ran a four-page lift-out self-defense supplement for handy carrying in one's wallet or whatever.

A meeting between National Headquarters, Chicago and Ann Arbor resolved that a cadre of ex-Argus people will from now on concentrate and direct all of their energies to building a powerful chapter and pushing the many programs that the Argus tribe didn't have time for. We see a definite need to find a storefront office somewhere else--we've been looking and we have the funds available to rent the office. We have a traveling literature table with posters and t-shirts and papers, but that ain't really enough. We were also thinking of putting shelves in our van and having a MOBILE LIBRARY. A few weeks ago we met with Lt. Staudenmeier (people's porker), the Ann Arbor News editor, and other miscellaneous chomps to impress upon them the importance of dealing with the junk problem--they related to our sincerity, and promised support if we would try to push the youth culture center through city council. The city has $30,000 to put into the center for the people, which is far out if they'll give it up. The last Tribal Council meeting dealt with junk a lot, and the article in the next day's Ann Arbor News was titled "Panthers Aiding Police". Pig Press! The Cultural Center is the most important community program we've initiated so far, except we naturally feel uneasy about depending on the government for money. The Tribal Council will actively push this program; the council is organizing and has formed a structure to deal effectively with community problems and programs.

Five of our brothers have been busted here in the period of two months. The repression is really getting heavy; they don't want us around here. First of all they busted one of our medical cadre, Jerry Mills, while he was waiting to go to a trial of a brother who got busted during the strike here. They got him on a three-year-old juvenile charge. They posted $3500 bail on him. He is still sitting in the Rocky Butte Prison.

They then busted our Deputy Minister of Finance, Donna Stengal, on a trespassing charge resulting from the Portland State Strike. This was a month and a half after the Strike. Her bail was $250 and we got her out right away.

Then our deputy minister of information, Deputy Minister of Defense were busted in Berkeley California for carrying a concealed weapon, carrying a deadly weapon, and another federal charge that was dropped. Two of the cadre were carrying knives on their belts with no shirts or jackets on them. Can this be concealed? Their bail was set at $4,000 which was reduced to $500. They are now out on bond awaiting trial in late September.

Then, during the People's Army Jamboree and Sky River Rock Festival, 25 fully-armed federal agents surrounded our house, broke in, and smashed it up, arresting three more brothers and sisters.

Each new act of repression only increases our determination to rid the planet of these foul pigs forever!!

WE ARE ALL OUTLAWS IN THE EYES OF AMERIKA

This man's name is Richard Carasco. He is an agent of the government who poses as a movement person in order to bust people.

One of his favorite tactics is trying to entice people into "gun deals"..., demanding cash for the weapons, and then splitting, whereupon the uniformed pigs enter the scene.

Although all the information is not in as of this writing, it seems clear that Carasco, using a different first name, was in New Jersey a while back, and got quite a few people busted there, including an involvement with Fort Dix 38.

Beware of this dangerous fool. He is desperate, knowing that people's righteous justice will catch up to him, soon. SEIZE THE TIME!