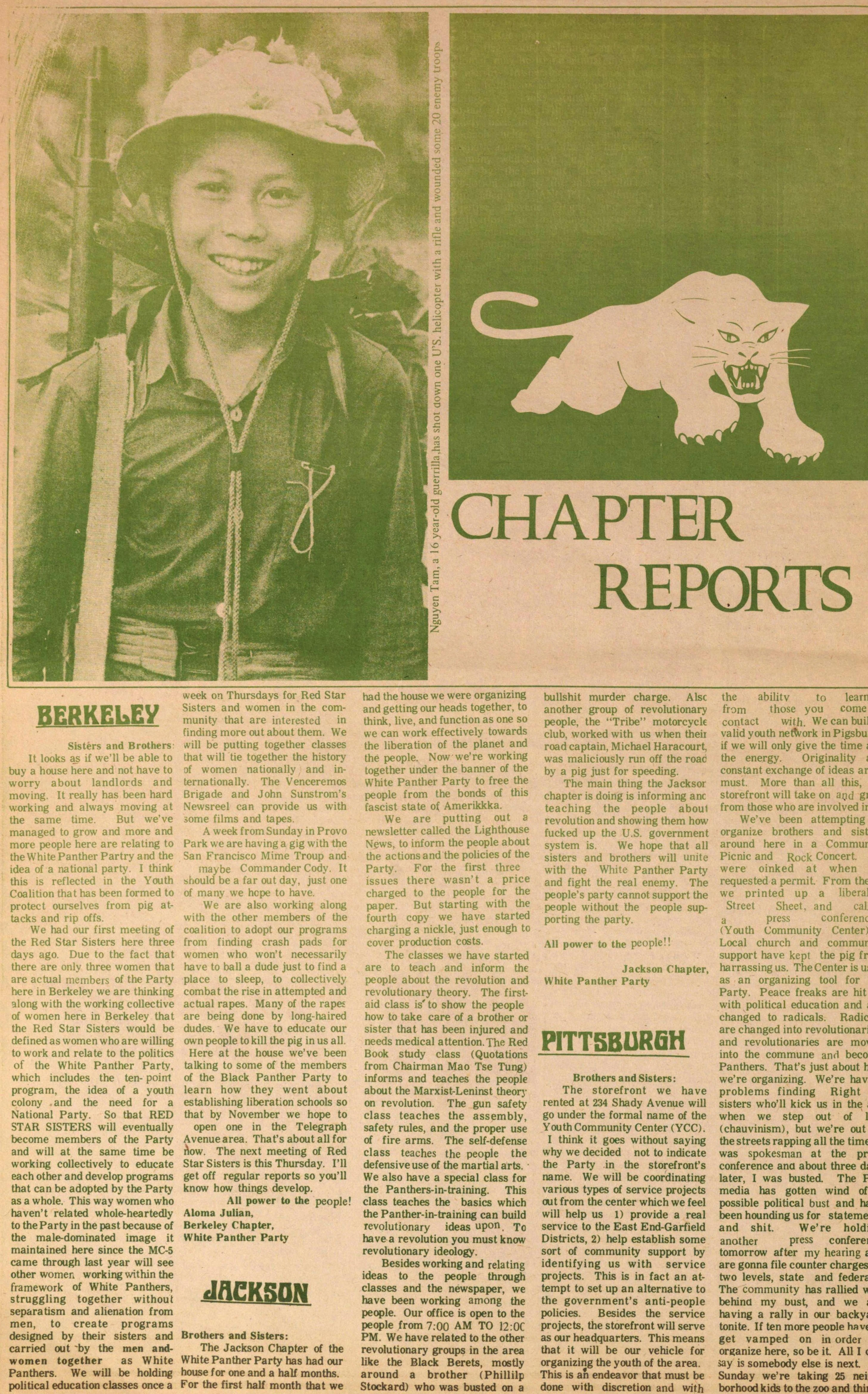 It looks as if we'll be able to buy a house here and not have to worry about landlords and moving. It really has been hard working and always moving at the same time. But we've managed to grow and more and more people here are relating to the White Panther Party and the idea of a national party. I think this is reflected in the Youth Coalition that has been formed to protect ourselves from pig attacks and rip offs.

We had our first meeting of the Red Star Sisters here three days ago. Due to the fact that there are only three women that are actual members of the Party here in Berkeley we are thinking along with the working collective of women here in Berkeley that the Red Star Sisters would be defined as women who are willing to work and relate to the politics of the White Panther Party, which includes the ten-point program, the idea of a youth colony and the need for a National Party. So that RED STAR SISTERS will eventually become members of the Party and will at the same time be working collectively to educate each other and develop programs that can be adopted by the Party as a whole. This way women who haven't related whole-heartedly to the Party in the past because of the male-dominated image it maintained here since the MC-5 came through last year will see other women working within the framework of White Panthers, struggling together without separatism and alienation from men, to create programs designed by their sisters and carried out by the men and women together as White Panthers. We will be holding political education classes once a week on Thursdays for Red Star Sisters and women in the community that are interested in finding more out about them. We will be putting together classes that will tie together the history of women nationally and internationally. The Venceremos Brigade and John Sunstrom's Newsreel can provide us with some films and tapes.

A week from Sunday in Provo Park we are having a gig with the San Francisco Mime Troup and maybe Commander Cody. It should be a far out day, just one of many we hope to have.

We are also working along with the other members of the coalition to adopt our programs from finding crash pads for women who won't necessarily have to ball a dude just to find a place to sleep, to collectively combat the rise in attempted and actual rapes. Many of the rapes are being done by long-haired dudes. We have to educate our own people to kill the pig in us all. Here at the house we've been talking to some of the members of the Black Panther Party to learn how they went about establishing liberation schools so that by November we hope to open one in the Telegraph Avenue area. That's about all for now. The next meeting of Red Star Sisters is this Thursday. I'll get off regular reports so you'll know how things develop.

The Jackson Chapter of the White Panther Party has had our house for one and a half months. For the first half month that we had the house we were organizing and getting our heads together, to think, live, and function as one so we can work effectively towards the liberation of the planet and the people. Now we're under the banner of the White Panther Party to free the people from the bonds of this fascist state of Amerikkka.

We are putting out a newsletter called the Lighthouse News, to inform the people about the actions and the policies of the Party. For the first three issues there wasn't a price charged to the people for the paper. But starting with the fourth copy we have started charging a nickel, just enough to cover production costs.

Besides working and relating ideas to the people through classes and the newspaper, we have been working among the people. Our office is open to the people from 7:00 AM TO 12:00 PM. We have related to the other revolutionary groups in the area like the Black Berets, mostly around a brother (Phillip Stockard) who was busted on a bullshit murder charge. Also another group of revolutionary people, the "Tribe" motorcycle club, worked with us when their road captain, Michael Haracourt, was maliciously run off the road by a pig just for speeding.

The storefront we have rented at 234 Shady Avenue will go under the formal name of the Youth Community Center (YCC). I think it goes without saying why we decided no to indicate the Party in the storefront's name. We will be coordinating various types of service projects out from the center which we feel will help us 1) provide a real service to the East End-Garfield Districts, 2) help establish some sort of community support by identifying us with service projects. This is in fact an attempt to set up an alternative to the government's anti-people policies. Besides the service projects, the storefront will serve as our headquarters. This means that it will be our vehicle for organizing the youth of the area. This is an endeavor that must be done with discretion and with the ability to learn from those you come in contact with. We can build a valid youth network in Pigsburg if we will only give the time and the energy. Originality and constant exchange of ideas are a must. More than all this, storefront will take on and grow from those who are involved in it.

We've been attempting to organize brothers and sisters around here in a Community Picnic and Rock Concert. We were oinked at when we requested a permit. From the store we printed up a liberal Street Sheet, and called a press conference (Youth Community Center). Local church and community support have kept the pig from harassing us. The Center is used as an organizing tool for the Party. Peace freaks are hit with political education and are changed to radicals. Radicals are changed into revolutionaries and revolutionaries and moved into the commune and become Panthers. That's just about how we're organizing. We're having problems finding Right sisters who'll kick us in the ass when we step out of line (chauvinism), but we're out in the streets rapping all the time. I was spokesman at the press conference and about three days later, I was busted. The Pig media has gotten wind of the possible political bust and has been hounding us for statements and shit. We're holding another press conference tomorrow after my hearing and are gonna file counter charges at two levels, state and federal. The community has rallied well behind my bust, and we are having a rally in our backyard tonite. If ten more people have to get vamped on in order to organize here, so be it. All I can say is somebody else is next. Sunday we're taking 25 neighborhood kids to the zoo and things

Nguyen Tam, a 16 year-old guerrilla has shot down one U.S. helicopter with a rifle and wounded some 20 enemy troops.