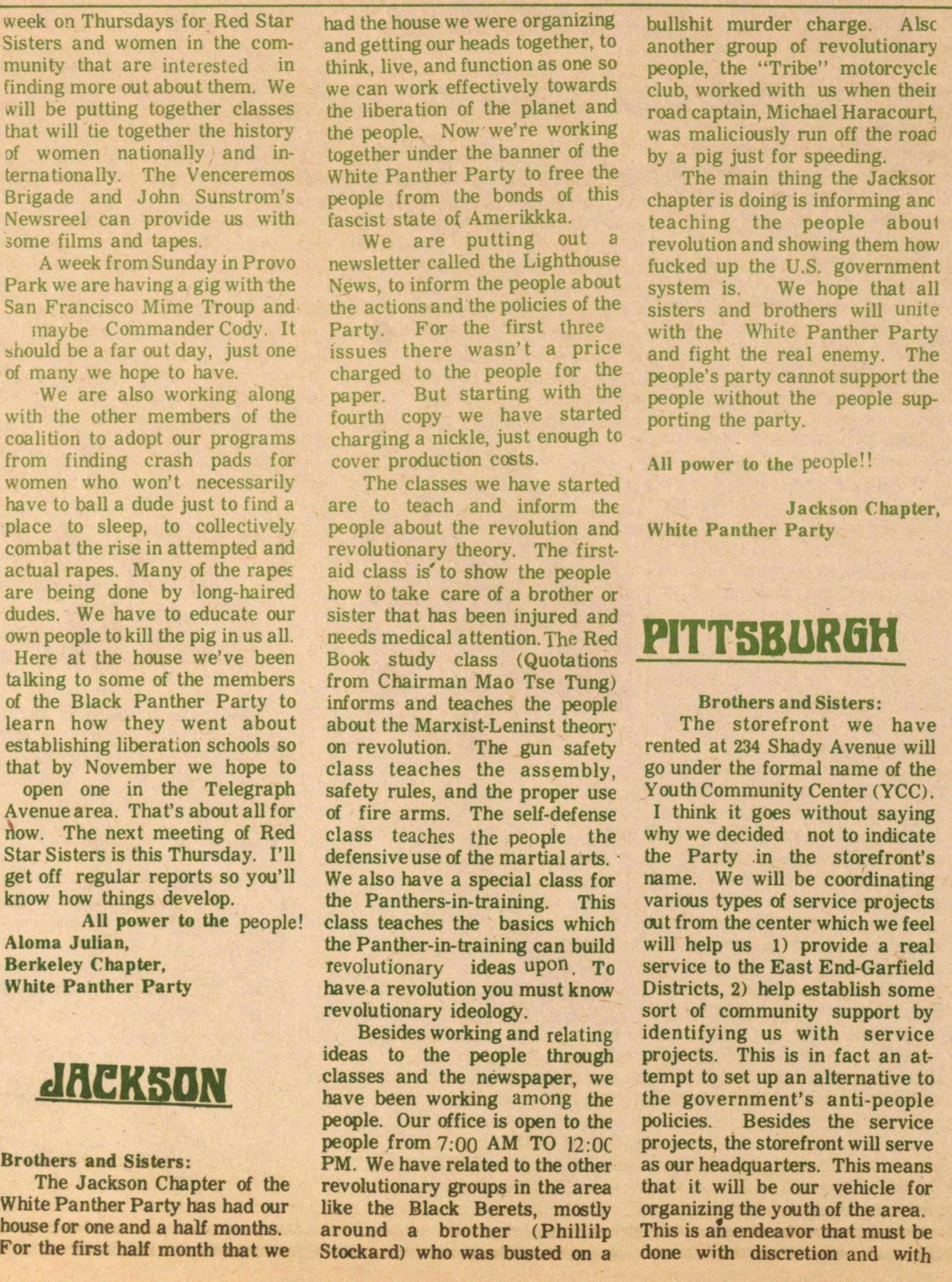 week on Thursdays for Red Star Sisters and women in the community that are interested in finding more out about them. We will be putting together classes that will tie together the history of women nationally and internationally. The Venceremos Brigade and John Sunstrom's Newsreel can provide us with some films and tapes.

A week from Sunday in Provo Park we are having a gig with the San Francisco Mime Troup and maybe Commander Cody. It should be a far out day, just one of many we hope to have.

We are also working along with the other members of the coalition to adopt our programs from finding crash pads for women who won't necessarily have to ball a dude just to find a place to sleep, to collectively combat the rise in attempted and actual rapes. Many of the rapes are being done by long-haired dudes. We have to educate our own people to kill the pig in us all. Here at the house we've been talking to some of the members of the Black Panther Party to learn how they went about establishing liberation schools so that by November we hope to open one in the Telegraph Avenue area. That's about all for now. The next meeting of Red Star Sisters is this Thursday. I'll get off regular reports so you'll know how things develop.

The Jackson Chapter of the White Panther Party has had our house for one and a half months. For the first half month that we had the house we were organizing and getting our heads together, to think, live, and function as one so we can work effectively towards the liberation of the planet and the people. Now we're under the banner of the White Panther Party to free the people from the bonds of this fascist state of Amerikkka.

We are putting out a newsletter called the Lighthouse News, to inform the people about the actions and the policies of the Party. For the first three issues there wasn't a price charged to the people for the paper. But starting with the fourth copy we have started charging a nickel, just enough to cover production costs.

Besides working and relating ideas to the people through classes and the newspaper, we have been working among the people. Our office is open to the people from 7:00 AM TO 12:00 PM. We have related to the other revolutionary groups in the area like the Black Berets, mostly around a brother (Phillip Stockard) who was busted on a bullshit murder charge. Also another group of revolutionary people, the "Tribe" motorcycle club, worked with us when their road captain, Michael Haracourt, was maliciously run off the road by a pig just for speeding.

The storefront we have rented at 234 Shady Avenue will go under the formal name of the Youth Community Center (YCC). I think it goes without saying why we decided no to indicate the Party in the storefront's name. We will be coordinating various types of service projects out from the center which we feel will help us 1) provide a real service to the East End-Garfield Districts, 2) help establish some sort of community support by identifying us with service projects. This is in fact an attempt to set up an alternative to the government's anti-people policies. Besides the service projects, the storefront will serve as our headquarters. This means that it will be our vehicle for organizing the youth of the area. This is an endeavor that must be done with discretion and with