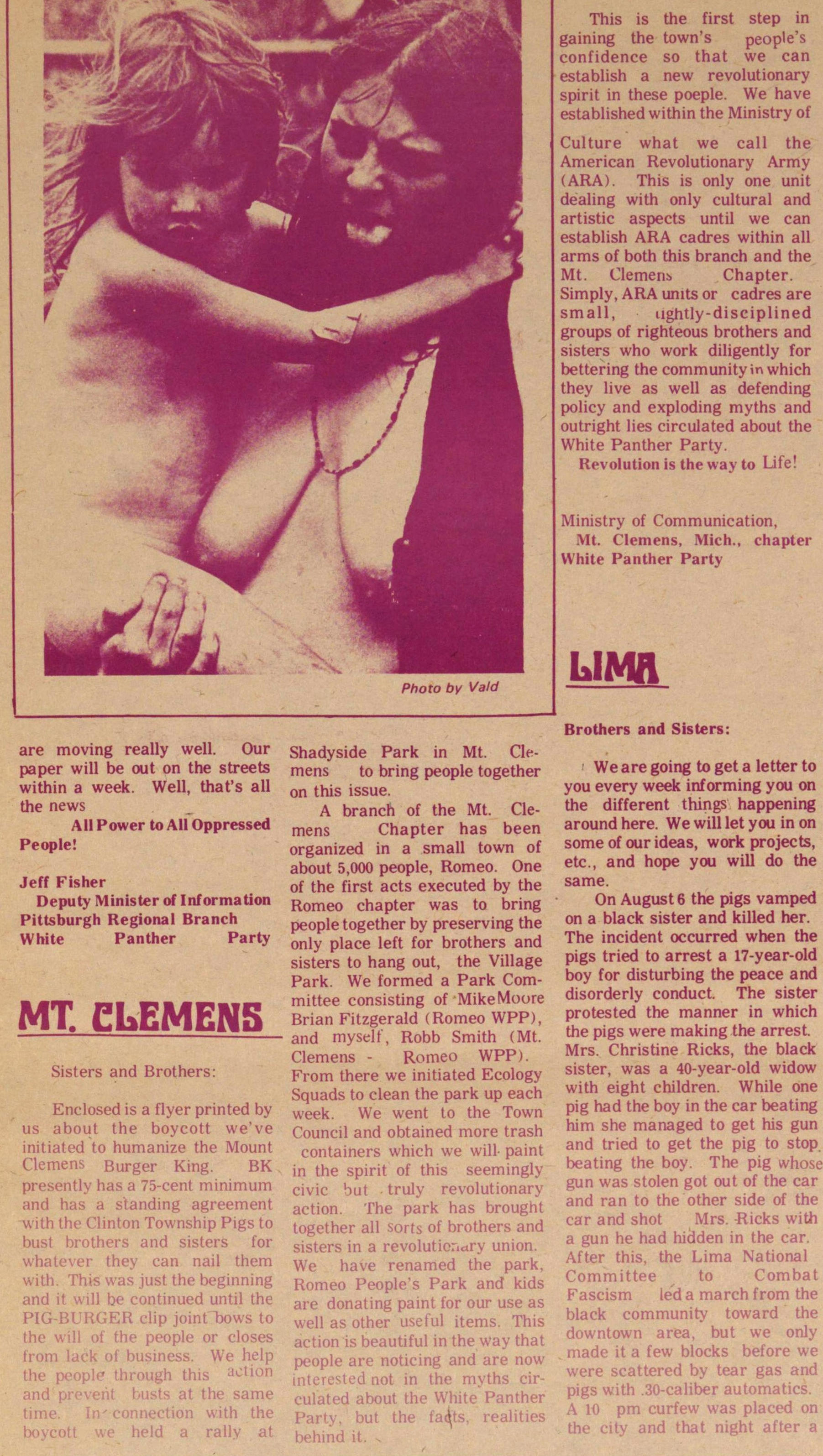 are moving really well. Our paper will be out on the streets within a week. Well, that's all the news.

All Power to All Oppressed People!

Enclosed is a flyer printed by us about the boycott we've initiated to humanize the Mount Clemens Burger King. BK presently has a 75-cent minimum and has a standing agreement With the Clinton Township Pigs to bust brothers and sisters for whatever they can nail them with. This was just the beginning and it will be continued until the PIG-BURGER clip joint bows to the will of the people or closes from lack of business. We help the people through this action and prevent busts at the same time. In connection with the boycott we held a rally at Shadyside Park in Mt. Clemens to bring people together on this issue.

A branch of the Mt. Clemens Chapter has been organized in a small town of about 5,000 people, Romeo. One of the first acts executed by the Romeo chapter was to bring people together by preserving the only place left for brothers and sisters to hang out, the Village Park. We formed a Park Committee consisting of Mike Moore, Brian Fitzgerald (Romeo WPP), and myself, Robb Smith (Mt. Clemens -- Romeo WPP). From there we initiated Ecology Squads to clean the park up each week. We went to the Town Council and obtained more trash containers which we paint in the spirit of this seemingly civic but truly revolutionary action. The park has brought together all sorts of brothers and sisters in a revolutionary union. We have renamed the park, Romeo People's Park and kids are donating paint for our use as well as other useful items. This action is beautiful in the way that people are noticing and are now interested not in the myths circulated about the White Panther Party, but the facts, realities behind it.

This is the first step in gaining the town's people's confidence so that we can establish a new revolutionary spirit in these people. We have established within the Ministry of Culture what we call the American Revolutionary Army (ARA). This is only one unit dealing with only cultural and artistic aspects until we can establish ARA cadres within all arms of both this branch and the Mt. Clemens Chapter. Simply, ARA units or cadres are small, tightly-disciplined groups of righteous brothers and sisters who work diligently for bettering the community in which they live as well as defending policy and exploding myths and outright lies circulated about the White Panther Party.

Revolution is the way to Life!

We are going to get a letter to you every week informing you on the different things happening around here. We will let you in on some of our ideas, work projects, etc., and hope you will do the same.

On August 6 the pigs vamped on a black sister and killed her. The incident occurred when the pigs tried to arrest a 17-year-old boy for disturbing the peace and disorderly conduct. The sister protested the manner in which the pigs were making the arrest. Mrs. Christine Ricks, the black sister, was a 40-year-old widow with eight children. While one pig had the boy in the car beating him she managed to get his gun and tried to get the pig to stop beating the boy. The pig whose gun was stolen got out of the car and ran to the other side of the car and shot Mrs. Ricks with a gun he had hidden in the car. After this, the Lima National Committee to Combat fascism led a march from the black community toward the downtown area, but we only made it a few blocks before we were scattered by tear gas and pigs with .30-caliber automatics. A 10 pm curfew was placed on the city and that night after a