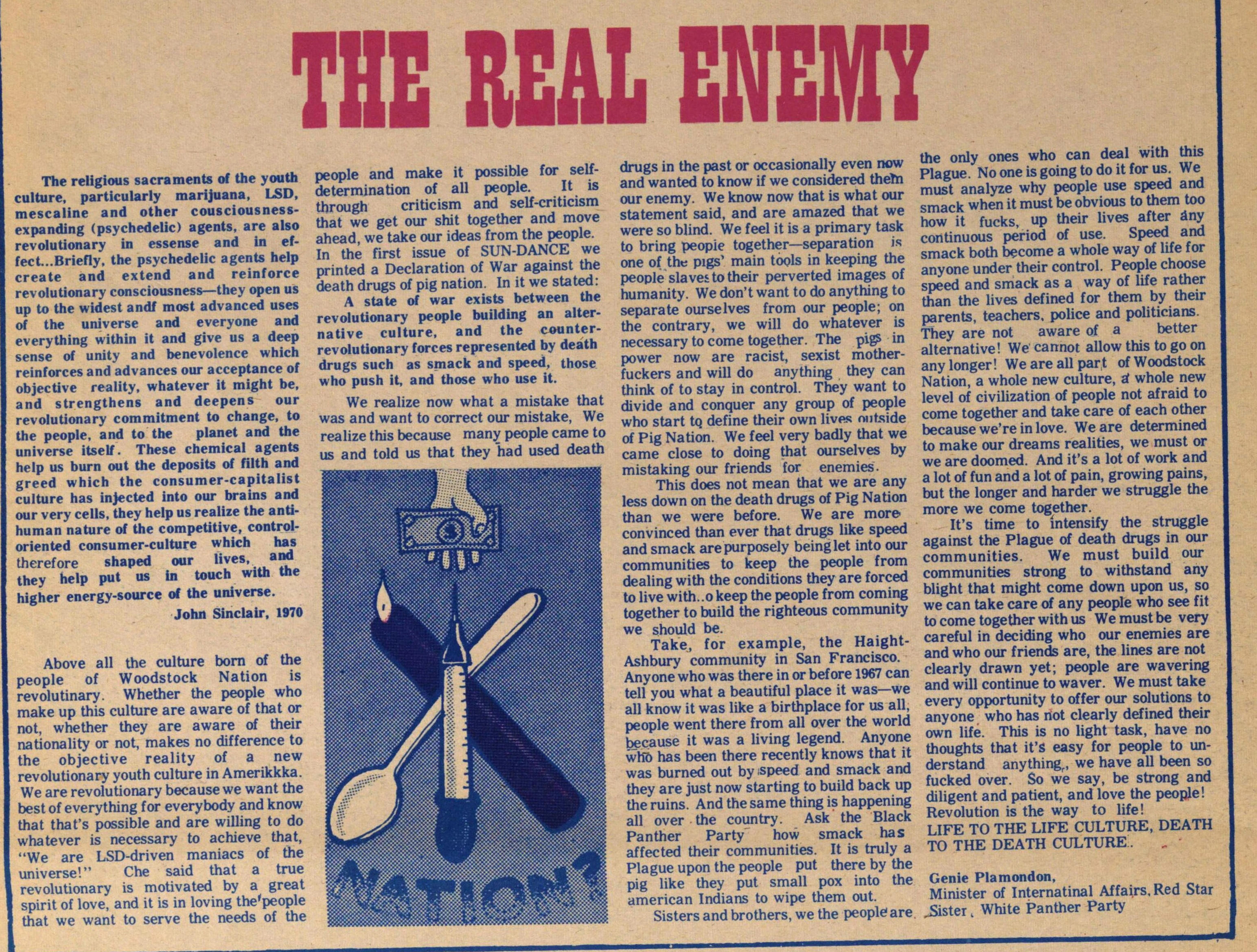 The religious sacraments of the youth culture, particularly marijuana, LSD, mescaline and other consciousness expanding (psychedelic) agents, are also revolutionary in essence and in effect...Briefly, the psychedelic agents help create and extend and reinforce revolutionary consciousness--they open us up to the widest and most advanced uses of the universe and everyone and everything within it and give us a deep sense of unity and benevolence which reinforces and advances our acceptance of objective reality, whatever it might be, and strengthens and deepens our revolutionary commitment to change, to the people, and to the planet and the universe itself. These chemical agents help us burn out the deposits of filth and greed which the consumer-capitalist culture has injected into our brains and our very cells, they help us realize the anti-human nature of the competitive, control oriented consumer-culture which has therefore shaped our lives, and they help put us in touch with the higher energy-source of the universe.

Above all the culture born of the people of Woodstock Nation is revolutionary. Whether the people who make up this culture are aware of that or not, whether they are aware of their nationality or not, makes no difference to the objective reality of a new revolutionary youth culture in Amerikkka. We are revolutionary because we want the best of everything for everybody and know that that's possible and are willing to do whatever is necessary to achieve that, "We are LSD-driven maniacs of the universe!" Che said that a true revolutionary is motivated by a great spirit of love, and it is in loving the people that we want to serve the needs of the people and make it possible for self-determination of all people. It is through criticism and self-criticism that we get our shit together and move ahead, we take our ideas from the people. In the first issue of SUN-DANCE we printed a Declaration of War against the death drugs of pig nation. In it we stated:

A state of war exists between the revolutionary people building an alternative culture, and the counter-revolutionary forces represented by death drugs such as smack and speed, those who push it, and those who use it.

We realize now what a mistake that was and want to correct our mistake. We realize this because many people came to us and told us that they had used death drugs in the past or occasionally even now and wanted to know if we considered them our enemy. We know now that is what our statement said, and are amazed that we were so blind. We feel it is a primary task to bring people together--separation is one of the pigs' main tools in keeping the people slaves to their perverted images of humanity. We don't want to do anything to separate ourselves from our people; on the contrary, we will do whatever is necessary to come together. The pigs in power now are racist, sexist motherfuckers and will do anything they can think of to stay in control. They want to divide and conquer any group of people who start to define their own lives outside of Pig Nation. We feel very badly that we came close to doing that ourselves by mistaking our friends for enemies.

This does not mean that we are any less down on the death drugs of Pig Nation than we were before. We are more convinced than ever that drugs like speed and smack are purposely being let into our communities to keep the people from dealing with the conditions they are forced to live with...keep the people from coming together to build the righteous community we should be.

Take, for example, the Haight-Ashbury community in San Francisco. Any one who was there in or before 1967 can tell you what a beautiful place it was--we all know it was like a birthplace for us all, people went there from all over the world because it was a living legend. Anyone who has been there recently knows that it was burned out by speed and smack and they are just now starting to build back up the ruins. And the same thing is happening all over the country. Ask the Black Panther Party how smack has affected their communities. It is truly a Plague upon the people put there by the pig like they put small pox into the american Indians to wipe them out.

Sisters and brothers, we the people are the only ones who can deal with this Plague. No one is going to do it for us. We must analyze why people use speed and smack when it must be obvious to them too how it fucks up their lives after any continuous period of use. Speed and smack both become a whole way of life for anyone under their control. People choose speed and smack as a way of life rather than the lives defined for them by their parents, teachers, police and politicians. They are not aware of a better alternative! We cannot allow this to go on any longer! We are all part of Woodstock Nation, a whole new culture, a whole new level of civilization of people not afraid to come together and take care of each other because we're in love. We are determined to make our dreams realities, we must or we are doomed. And it's a lot of work and a lot of fun and a lot of pain, growing pains, but the longer and harder we struggle the more we come together.

It's time to intensify the struggle against the Plague of death drugs in our communities. We must build our communities strong to withstand any blight that might come down upon us, so we can take care of any people who see fit to come together with us. We must be very careful in deciding who our enemies are and who our friends are, the lines are not clearly drawn yet; people are wavering and will continue to waver. We must take every opportunity to offer our solutions to anyone who has not clearly defined their own life. This is no light task, have no thoughts that it's easy for people to understand anything, we have all been so fucked over. So we say, be strong and diligent and patient, and love the people! Revolution is the way to life! LIFE TO THE LIFE CULTURE, DEATH I TO THE DEATH CULTURE.