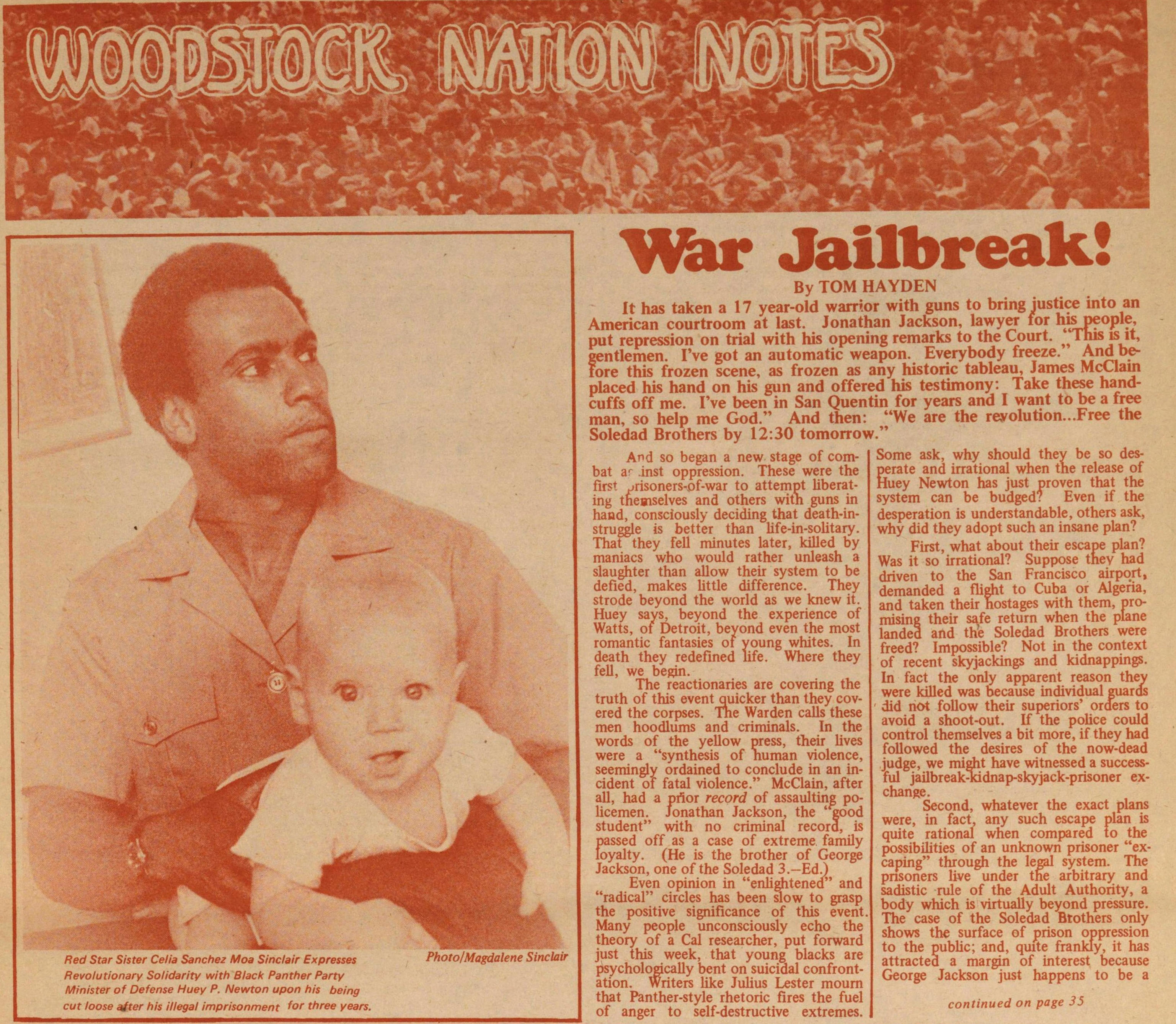 It has taken a 17 year-old warrior with guns to bring justice into an American courtroom at last. Jonathan Jackson, lawyer for his people, put repression on trial with his opening remarks to the Court. "This is it, gentlemen. I've got an automatic weapon. Everybody freeze." And before this frozen scene, as frozen as any historic tableau, James McClain placed his hand on his gun and offered his testimony: Take these handcuffs off me. I've been in San Quentin for years and I want to be a free man, so help me God." And then: "We are the revolution... Free the Soledad Brothers by 12:30 tomorrow."

And so began a new stage of combat against oppression. These were the first prisoners-of-war to attempt liberating themselves and others with guns in hand, consciously deciding that death-in-struggle is better than life-in-solitary. That they fell minutes later, killed by maniacs who would rather unleash a slaughter than allow their system to be defied, makes little difference. They strode beyond the world as we knew it. Huey says, beyond the experience of Watts, of Detroit, beyond even the most romantic fantasies of young whites. In death they redefined life. Where they fell, we begin.

The reactionaries are covering the truth of this event quicker than they covered the corpses. The Warden calls these men hoodlums and criminals. In the words of the yellow press, their lives were a "synthesis of human violence, seemingly ordained to conclude in an incident of fatal violence." McClain, after all, had a prior record of assaulting policemen. Jonathan Jackson, the "good student" with no criminal record, is passed off as a case of extreme family loyalty. (He is the brother of George Jackson, one of the Soledad 3.- Ed.)

Even opinion in "enlightened" and "radical" circles has been slow to grasp the positive significance of this event. Many people unconsciously echo the theory of a Cal researcher, put forward just this week, that young blacks are psychologically bent on suicidal confrontation. Writers like Julius Lester mourn that Panther-style rhetoric fires the fuel of anger to self-destructive extremes. Some ask, why should they be so desperate and irrational when the release of Huey Newton has just proven that the system can be budged? Even if the desperation is understandable, others ask, why did they adopt such an insane plan?

First, what about their escape plan? Was it so irrational? Suppose they had driven to the San Francisco airport, demanded a flight to Cuba or Algeria, and taken their hostages with them, promising their safe return when the plane landed and the Soledad Brothers were freed? Impossible? Not in the context of recent skyjackings and kidnappings. In fact the only apparent reason they were killed was because individual guards did not follow their superiors' orders to avoid a shoot-out. If the police could control themselves a bit more, if they had followed the desires of the now-dead judge, we might have witnessed a successful jailbreak-kidnap-skyjack-prisoner exchange.

Second, whatever the exact plans were, in fact, any such escape plan is quite rational when compared to the possibilities of an unknown prisoner "escaping" through the legal system. The prisoners live under the arbitrary and sadistic rule of the Adult Authority, a body which is virtually beyond pressure. The case of the Soledad Brothers only shows the surface of prison oppression to the public; and, quite frankly, it has attracted a margin of interest because George Jackson just happens to be a