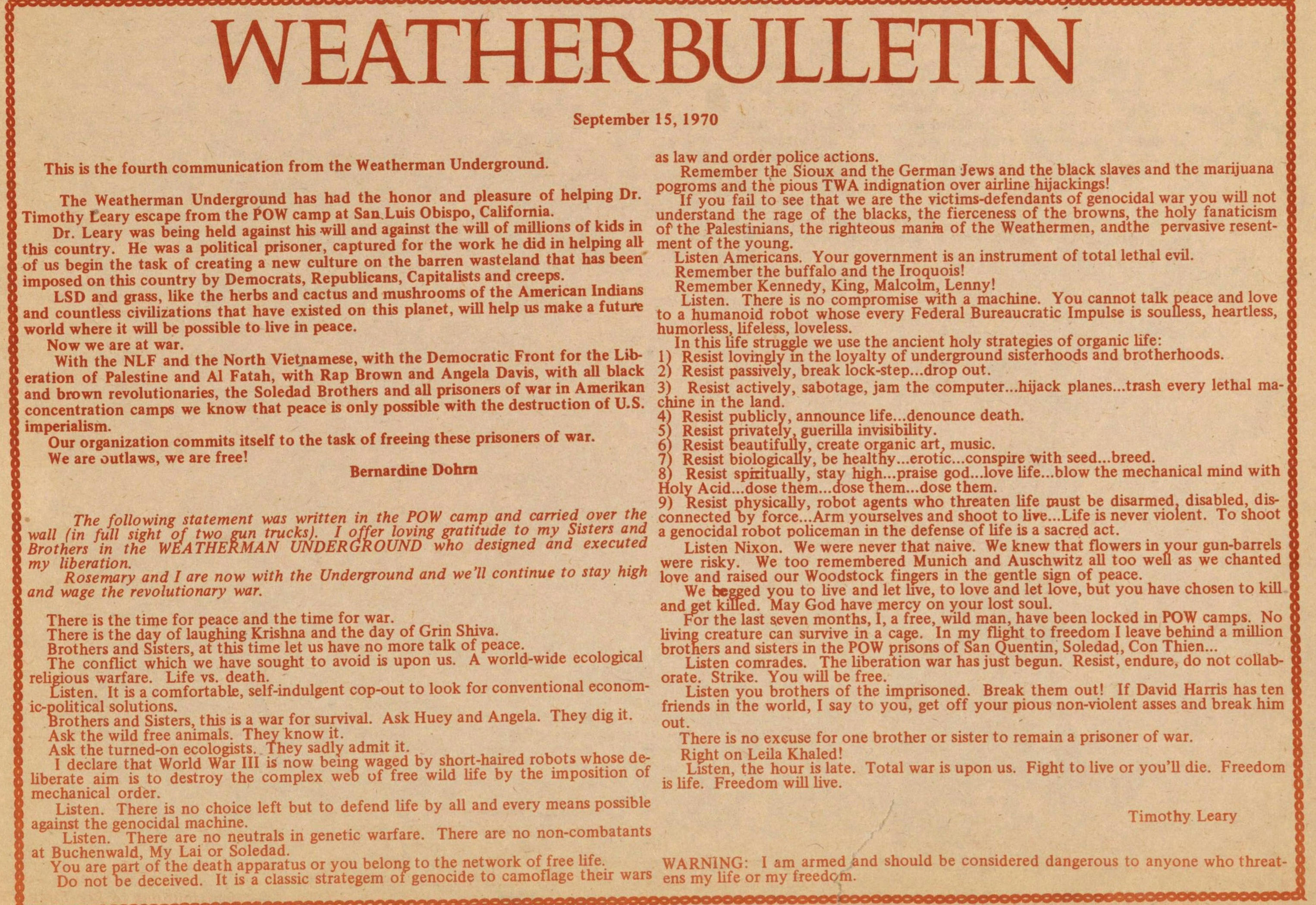 This is the fourth communication from the Weatherman Underground.

The Weatherman Underground has had the honor and pleasure of helping Dr. Timothy Leary escape from the POW camp at San Luis Obispo, California.

Dr. Leary was being held against his will and against the will of millions of kids in this country. He was a political prisoner, captured for the work he did in helping all of us begin the task of creating a new culture on the barren wasteland that has been imposed on this country by Democrats, Republicans, Capitalists and creeps.

LSD and grass, like the herbs and cactus and mushrooms of the American Indians and countless civilizations that have existed on this planet, will help us make a future world where it will be possible to live in peace.

Now we are at war.

With the NLF and the North Vietnamese, with the Democratic Front for the Liberation of Palestine and Al Fatah, with Rap Brown and Angela Davis, with all black and brown revolutionaries, the Soledad Brothers and all prisoners of war in Amerikan concentration camps we know that peace is only possible with the destruction of U.S. imperialism.

Our organization commits itself to the task of freeing these prisoners of war. We are outlaws, we are free!

The following statement was written in the POW camp and carried over the wall (in full sight of two gun trucks). I offer loving gratitude to my Sisters and Brothers in the WEATHERMAN UNDERGROUND who designed and executed my liberation.

Rosemary and I are now with the Underground and we'll continue to stay high and wage the revolutionary war.

There is the time for peace and the time for war. There is the day of laughing Krishna and the day of Grin Shiva. Brothers and Sisters, at this time let us have no more talk of peace . The conflict which we have sought to avoid is upon us. A world-wide ecological religious warfare. Life vs. death.

Listen. It is a comfortable, self-indulgent cop-out to look for conventional economic-political solutions.

Brothers and Sisters, this is a war for survival. Ask Huey and Angela. They dig it. Ask the wild free animals. They know it.

Ask the turned-on ecologists. They sadly admit it.

I declare that World War III is now being waged by short-haired robots whose deliberate aim is to destroy the complex web of free wild life by the imposition of mechanical order.

Listen. There is no choice left but to defend life by all and every means possible against the genocidal machine.

You are part of the death apparatus or you belong to the network of free life. Do not be deceived. It is a classic strategem of genocide to camouflage their wars as law and order police actions.

Remember the Sioux and the German Jews and the black slaves and the marijuana pogroms and the pious TWA indignation over airline hijackings! If you fail to see that we are the victims-defendants of genocidal war you will not understand the rage of the blacks, the fierceness of the browns, the holy fanaticism of the Palestinians, the righteous mania of the Weathermen, and the pervasive resentment of the young.

Listen Americans. Your government is an instrument of total lethal evil. Remember the buffalo and the Iroquois! Remember Kennedy, King, Malcolm, Lenny!

Listen. There is no compromise with a machine. You cannot talk peace and love to a humanoid robot whose every Federal Bureaucratic Impulse is soulless, heartless, humorless, lifeless, loveless.

Listen Nixon. We were never that naive. We knew that flowers in your gun-barrels were risky. We too remembered Munich and Auschwitz all too well as we chanted love and raised our Woodstock fingers in the gentle sign of peace.

We begged you to live and let live, to love and let love, but you have chosen to kill and get killed. May God have mercy on your lost soul.

For the last seven months, I, a free, wild man, have been locked in POW camps. No living creature can survive in a cage. In my flight to freedom I leave behind a million brothers and sisters in the POW prisons of San Quentin, Soledad, Con Thien...

Listen comrades. The liberation war has just begun. Resist, endure, do not collaborate. Strike. You will be free.

Listen you brothers of the imprisoned. Break them out! If David Harris has ten friends in the world, I say to you, get off your pious non-violent asses and break him out.

There is no excuse for one brother or sister to remain a prisoner of war.

Listen, the hour is late. Total war is upon us. Fight to live or you'll die. Freedom is life. Freedom will live.

WARNING: I am armed and should be considered dangerous to anyone who threatens my life or my freedom.