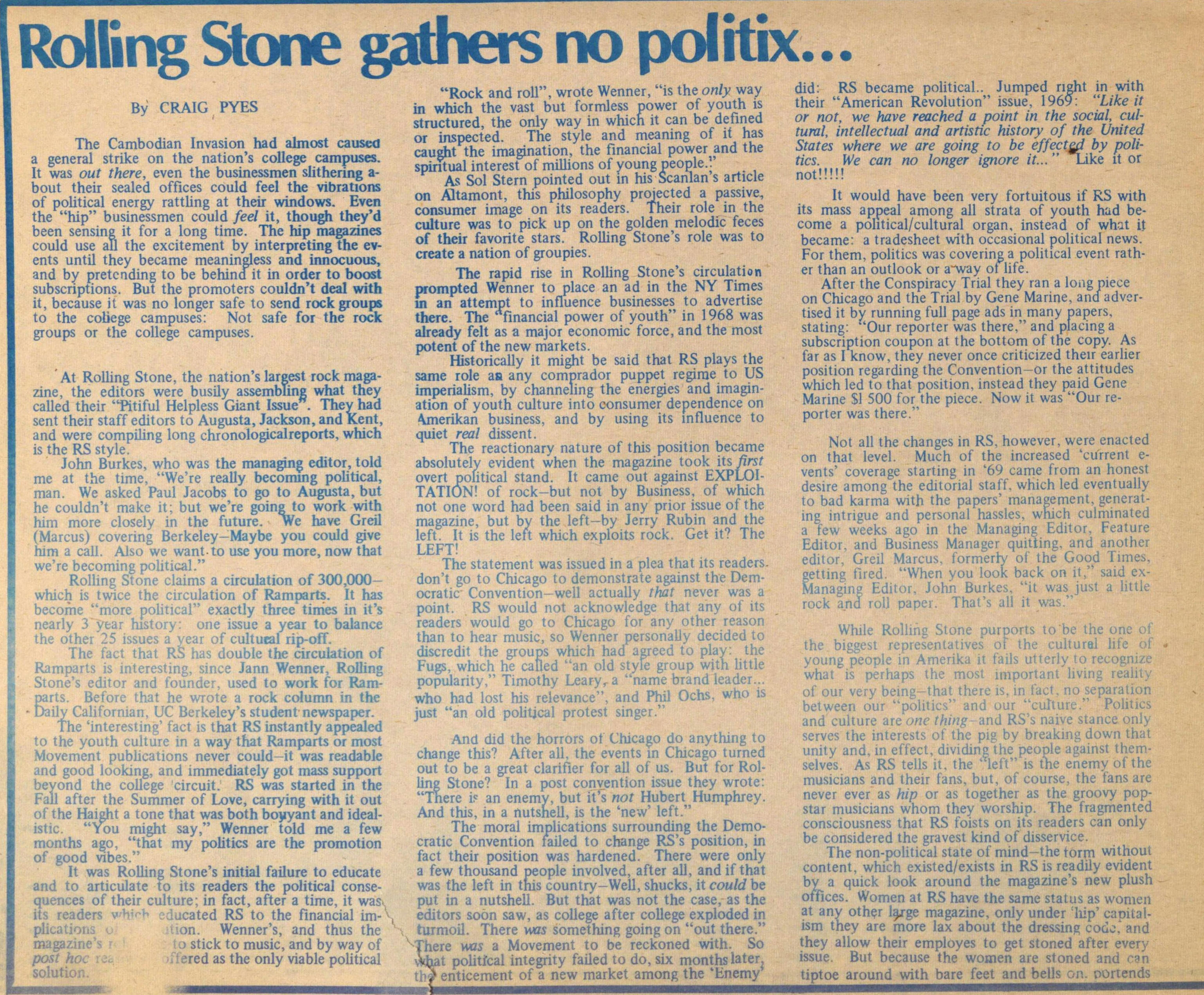 The Cambodian Invasion had almost caused a general strike on the nation's college campuses. It was out there, even the businessmen slithering about their sealed offices could feel the vibrations of political energy rattling at their windows. Even the "hip" businessmen could feel it, though they'd been sensing it for a long time. The hip magazines could use all the excitement by interpreting the events until they became meaningless and innocuous, and by pretending to be behind it in order to boost subscriptions. But the promoters couldn't deal with it, because it was no longer safe to send rock groups to the college campuses: Not safe for the rock groups or the college campuses.

At Rolling Stone, the nation's largest rock magazine, the editors were busily assembling what they called their "Pitiful Helpless Giant Issue". They had sent their staff editors to Augusta, Jackson, and Kent, and were compiling long chronological reports, which is the RS style.

John Burkes, who was the managing editor, told me at the time, "We're really becoming political, man. We asked Paul Jacobs to go to Augusta, but he couldn't make it; but we're going to work with him more closely in the future. We have Greil (Marcus) covering Berkeley-Maybe you could give him a cali. Also we want to use you more, now that we're becoming political."

Rolling Stone claims a circulation of 300,000- which is twice the circulation of Ramparts. It has become "more political" exactly three times in it's nearly 3 year history: one issue a year to balance the other 25 issues a year of cultural rip-off.

The fact that RS has double the circulation of Ramparts is interesting, since Jann Wenner, Rolling Stone's editor and founder, used to work for Ramparts. Before that he wrote a rock column in the Daily Californian, UC Berkeley's student newspaper.

The 'interesting' fact is that RS instantly appealed to the youth culture in a way that Ramparts or most Movement publications never could- it was readable and good looking, and immediately got mass support beyond the college circuit. RS was started in the Fall after the Summer of Love, carrying with it out of the Haight a tone that was both bouyant and idealistic. "You might say," Wenner told me a few months ago, "that my politics are the promotion of good vibes."

It was Rolling Stone's initial failure to educate and to articulate to its readers the political consequences of their culture; in fact, after a time, it was its readers which educated RS to the financial implications of... Wenner's, and thus the magazine's... to stick to music, and by way of post hoc... offered as the only viable political solution.

"Rock and roll", wrote Wenner, "is the only way in which the vast but formless power of youth is structured, the only way in which it can be defined or inspected. The style and meaning of it has caught the imagination, the financial power and the spiritual interest of millions of young people."

As Sol Stern pointed out in his Scanlan's article on Altamont, this philosophy projected a passive, consumer image on its readers. Their role in the culture was to pick up on the golden melodic feces of their favorite stars. Rolling Stone's role was to create a nation of groupies.

The rapid rise in Rolling Stone's circulation prompted Wenner to place an ad in the NY Times in an attempt to influence businesses to advertise there. The "financial power of youth" in 1968 was already felt as a major economic force, and the most potent of the new markets.

Historically it might be said that RS plays the same role as any comprador puppet regime to US imperialism, by channeling the energies and imagination of youth culture into consumer dependence on Amerikan business, and by using its influence to quiet real dissent.

The reactionary nature of this position became absolutely evident when the magazine took its first overt political stand. It came out against EXPLOITATION! of rock- but not by Business, of which not one word had been said in any prior issue of the magazine, but by the left-by Jerry Rubin and the left. It is the left which exploits rock. Get it? The LEFT!

The statement was issued in a plea that its readers, don't go to Chicago to demonstrate against the Democratic Convention-well actually that never was a point. RS would not acknowledge that any of its readers would go to Chicago for any other reason than to hear music, so Wenner personally decided to discredit the groups which had agreed to play: the Fugs, which he cafied "an old style group with little popularity," Timothy Leary, a "name brand leader... who had lost his relevance", and Phil Ochs, who is just "an old political protest singer."

And did the horrors of Chicago do anything to change this? After all, the events in Chicago turned out to be a great clarifier for all of us. But for Rolling Stone? In a post convention issue they wrote: "There is an enemy, but it's not Hubert Humphrey. And this, in a nutshell, is the 'new' left."

The moral implications surrounding the Democratic Convention failed to change RS's position, in fact their position was hardened. There were only a few thousand people involved, after all, and if that was the left in this country-Well, shucks, it could be put in a nutshell. But that was not the case, as the editors soon saw, as college after college exploded in turmoil. There was something going on "out there." There was a Movement to be reckoned with. So what political integrity failed to do, six months later, the enticement of a new market among the 'Enemy' did: RS became political.. Jumped right in with their "American Revolution" issue, 1969: "Like it or not, we have reached a point in the social, cultural, intellectual and artistic history of the United States where we are going to be effected by politics. We can no longer ignore it... " Like it or not!!!!!

It would have been very fortuitous if RS with its mass appeal among all strata of youth had become a pohtical/cultural organ, instead of what it became: a tradesheet with occasional political news. For them, politics was covering a political event rather than an outlook or a way of life.

After the Conspiracy Trial they ran a long piece on Chicago and the Trial by Gene Marine, and advertised it by running full page ads in many papers, stating: "Our reporter was there," and placing a subscription coupon at the bottom of the copy. As far as I know, they never once criticized their earlier position regarding the Convention-or the attitudes which led to that position, instead they paid Gene Marine $1500 for the piece. Now it was "Our reporter was there."

Not all the changes in RS, however, were enacted on that level. Much of the increased 'current events' coverage starting in '69 came from an honest desire among the editorial staff, which led eventually to bad karma with the papers' management, generating intrigue and personal hassles, which culminated a few weeks ago in the Managing Editor, Feature Editor, and Business Manager quitting, and another editor, Greil Marcus, formerly of the Good Times, getting fired. "When you look back on it," said ex-Managing Editor, John Burkes, "it was just a little rock and roll paper. That's all it was."

While Rolling Stone purports to be the one of the biggest representatives of the cultural life of young people in Amerika it fails utterly to recognize what is perhaps the most important living reality of our very being-that there is, in fact, no separation between our "politics" and our "culture." Politics and culture are one thing-and RS's naive stance only serves the interests of the pig by breaking down that unity and, in effect, dividing the people against themselves. As RS tells it, the "left" is the enemy of the musicians and their fans, but, of course, the fans are never ever as hip or as together as the groovy pop-star musicians whom they worship. The fragmented consciousness that RS foists on its readers can only be considered the gravest kind of disservice.

The non-political state of mind-the form without content, which existed/exists in RS is readily evident by a quick look around the magazine's new plush offices. Women at RS have the same status as women at any other large magazine, only under 'hip' capitalism they are more lax about the dressing code. and they allow their employees to get stoned after every issue. But because the women are stoned and can tiptoe around with bare feet and bells on portends no fundamental change in their condition (except the dope makes it more euphoric). There are still no women editors, and seldom if ever does a woman's byline appear under any article in the paper. O Contradictions! Contradictions! The wallpaper along the corridor to Jann's office is a long line of silhouetted naked women, and above it some idealist has put a computer print-out which reads: FUCK CAPITALISM!

Jann himself is not a villainous sort, not a robber baron or anything. Imagine being 24, having long hair, mod but sloppy clothes, paying yourself a little over $20,000 a year, and being forced to sit in the outer offices of 'enlightened capitalists,' whom you are dependent upon For advertising. Why they only sneer at you as some sort of scruffy little upstart. And they hardly say 'fuck,' let alone' 'capitalism,' and they never think of putting the two together.

Unfortunately for Wenner, his only model of an editor was a bon vivant who lives the journalistic myth- the machismo, drinking, carousing, extravagant, generous lifestyle. Consequently, Wenner's lifestyle is developing much the same way. It is not just a copycat relationship, but also the relationship of the pupil to the master, and the biography of the master pupil.

Wenner has in the same style of his former editor outfitted his office, squandered money high-lifing it in NY: you know, the limosine, the plush suites, the best restaurants, the best of everything, all the while complaining that one has to wear a suit and tie... And that is so unhip!

Of course the giddyness of success gives one the feeling: "I can do anything." And so as RS's circulation rose, due to bad fiscal policy, the amount of capital diminished. There were attempts to finger new markets with the revival of NY Scenes Magazine, a failure, and the 'Conscience Market' with Earth Times, a $60,000 failure.

Now Wenner is back to what he knows the best: the Music Market. Rolling Stone is going back as it was: a definitive, well-written account of rock, with lots of gossipy notes about the 'stars.' "RS will be to rock," prophesied John Burkes. "what Downbeat is to jazz. It will be perpetual 1967 there."

Meanwhile Wenner, who did break a lot of barriers with advertisers has helped a lot of other genre magazines to start in circulation. His perspectives now, having gone out of culture into business, is to land the big accounts which will enable him to build a circulation of a million readers. To do this he will have to stick pretty closely to music, having floated enough notes of his own. As was shown during the Cambodian affair, too much unrest can be bad for business.

For a righteous example of a music publication that has an intelligent and straightforward outlook on the happenings inside Woodstock Nation, we suggest you check out CREEM magazine. Creem's address is 3729 Cass Ave., Detroit, Michigan, 48201.)