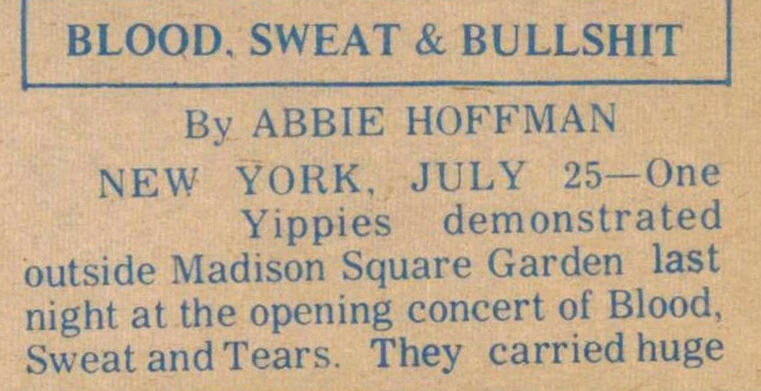 Yippies demonstrated outside Madison Square Garden last night at the opening concert of Blood, Sweat and Tears. They carried huge red, white and blue signs that said "Blood Sweat & Bullshit" and dumped twenty pounds of manure in front of the main gate. They were protesting the recent tour of Eastern Europe by the Band, under the auspicies of the CIA (Central Intelligence Agency). The band visited and played in Yugoslavia, Czechoslovakia and other countries, bringing in their words "our rock revolution behind the iron curtain". On their return BS&T held a press conference at which they suggested, "all the protestors here should go there and see what it's like and they'd never complain again". The yippies also were protesting a planned "benefit" BS&T was arranging with other rock groups for Kent scholarships funds. When asked if there was any inconsistency with setting up 4 scholarships in memory of students who died trying to close the school. BS&T replied, "Oh, well, they'll open the school in the fall and some deserving kids should replace those that were killed." Several yippies got inside the garden and shouted out "Bullshit! Bullshit! " when the group appeared. There were scuffles with police but no arrests. At a press conference, a spokesman stated that the Youth International Party was disgusted with the fact that a rock group could openly cooperate with the CIA whose sole purpose is to spread bullshit lies about what goes on here and instigate the overthrow of governments that serve people. Blood, Sweat and Bullshit is symbolic of how sophisticated segments of the economy and government rip off the youth culture. The group called on Yippies everywhere to boycott or disrupt the group's concerts and picket stores that carry their records. They also suggested that the members of the band cut their hair like the other straight pigs in the CIA.