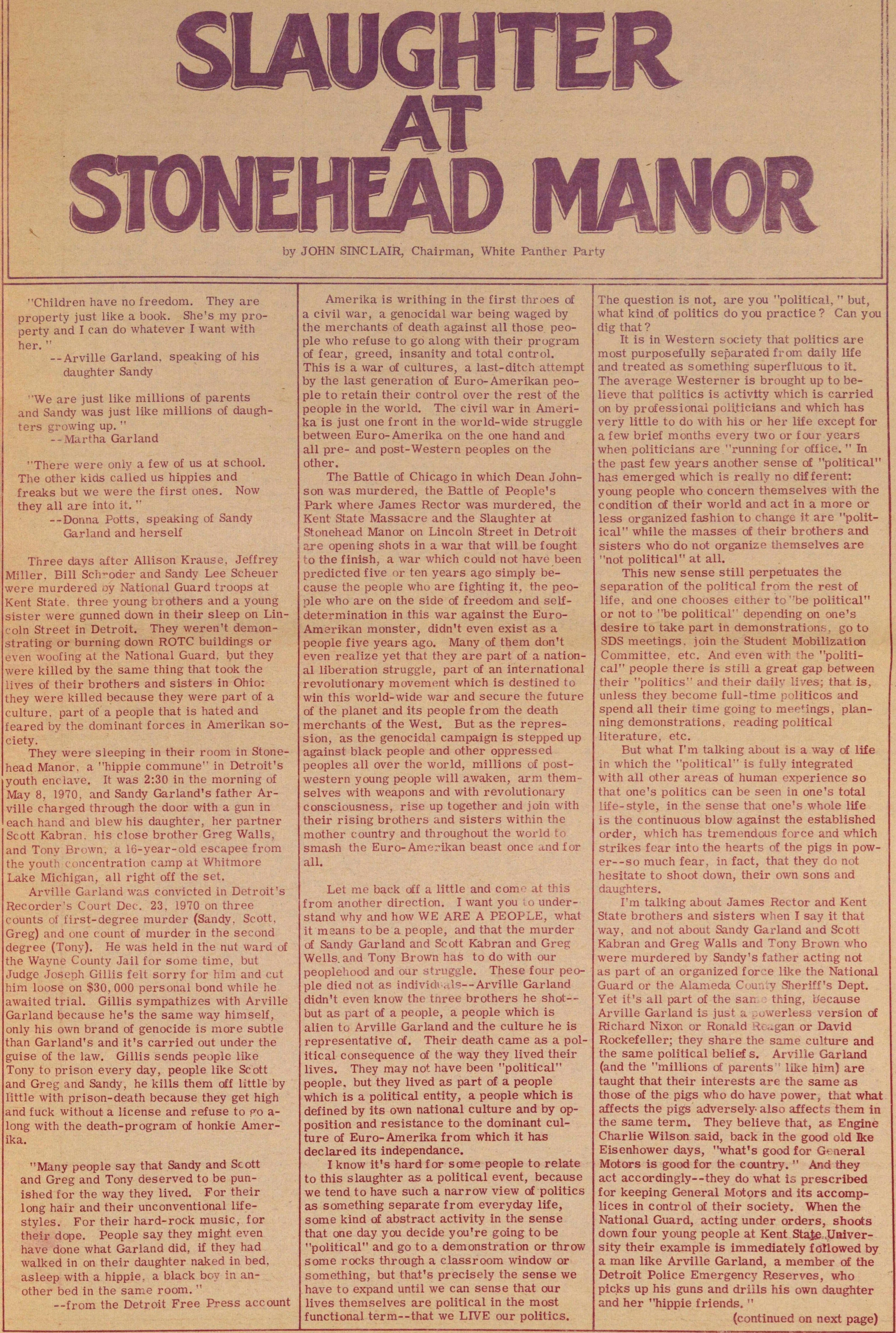 "Children have no freedom. They are property just like a book. She's my property and I can do whatever I want with her. " --Arville Garland. speaking of his daughter Sandy

"There were only a few of us at school. The other kids called us hippies and freaks but we were the first ones. Now they all are into it. " --Donna Potts, speaking of Sandy Garland and herself

Three days after Allison Krause, Jeffrey Miller. Bill Schroder and Sandy Lee Scheuer were murdered by National Guard troops at Kent State, three young brothers and a young sister were gunned down in their sleep on Lincoln Street in Detroit. They weren't demonstrating or burning down ROTC buildings or even woofing at the National Guard, but they were killed by the same thing that took the lives of their brothers and sisters in Ohio: they were killed because they were part of a culture, part of a people that is hated and feared by the dominant forces in Amerikan society.

They were sleeping in their room in Stonehead Manor, a "hippie commune" in Detroit's youth enclave. It was 2:30 in the morning of May 8, 1970, and Sandy Garland's father Arville charged through the door with a gun in each hand and blew his daughter, her partner Scott Kabran, his close brother Greg Walls, and Tony Brown, a 16-year-old escapee from the youth concentration camp at Whitmore Lake Michigan, all right off the set.

Arville Garland was convicted in Detroit's Recorder's Court Dec. 23, 1970 on three counts of first-degree murder (Sandy, Scott, Greg) and one count of murder in the second degree (Tony). He was held in the nut ward of the Wayne County Jail for some time, but Judge Joseph Gillis felt sorry for him and cut him loose on $30,000 personal bond while he awaited trial. Gillis sympathizes with Arville Garland because he's the same way himself, only his own brand of genocide is more subtle than Garland's and it's carried out under the guise of the law. Gillis sends people like Tony to prison every day, people like Scott and Greg and Sandy, he kills them off little by little with prison-death because they get high and fuck without a license and refuse to go along with the death-program of honkie Amerika.

"Many people say that Sandy and Scott and Greg and Tony deserved to be punished for the way they lived. For their long hair and their unconventional life-styles. For their rock music, for their dope. People say they might even have done what Garland did, if they had walked in on their daughter naked in bed, asleep with a hippie, a black boy in another bed in the same room. " --from the Detroit Free Press account

Amerika is writhing in the first throes of a civil war, a genocidal war being waged by the merchants of death against all those people who refuse to go along with their program of fear, greed, insanity and total control. This is a war of cultures, a last-ditch attempt by the last generation of Euro-Amerikan people to retain their control over the rest of the people in the world. The civil war in Amerika is just one front in the world-wide struggle between Euro-Amerika on the one hand and all and pre- and post-Western peoples on the other.

The Battle of Chicago in which Dean Johnson was murdered, the Battle of People's Park where James Rector was murdered, the Kent State Massacre and the Slaughter at Stonehead Manor on Lincoln Street in Detroit are opening shots in a war that will be fought to the finish, a war which could not have been predicted five or ten years ago simply because the people who are fighting it, the people who are on the side of freedom and self-determination in this war against the Euro-Amerikan monster, didn't even exist as a people five years ago. Many of them don't even realize yet that they are part of a national liberation struggle, part of an international revolutionary movement which is destined to win this world-wide war and secure the future of the planet and its people from the death merchants of the West. But as the repression, as the genocidal campaign is stepped up against black people and other oppressed peoples all over the world, millions of post-western young people will awaken, arm themselves with weapons and with revolutionary consciousness, rise up together and join with their rising brothers and sisters within the mother country and throughout the world to smash the Euro-Amerikan beast once and for all.

Let me back off a little and come at this from another direction. I want you to understand why and how WE ARE A PEOPLE, what it means to be a people, and that the murder of Sandy Garland and Scott Kabran and Greg Wells and Tony Brown has to do with our peoplehood and our struggle. These four people died not as individuals- Arville Garland didn't even know the three brothers he shot - but as part of a people, a people which is alien to Arville Garland and the culture he is representative of. Their death came as a political consequence of the way they lived their lives. They may not have been "political" people, but they lived as part of a people which is a political entity, a people which is defined by its own national culture and by opposition and resistance to the dominant culture of Euro-Amerika from which it has declared its independence.

I know it's hard for some people to relate to this slaughter as a political event, because we tend to have such a narrow view of politics as something separate from everyday life, some kind of abstract activity in the sense that one day you decide you're going to be "political" and go to a demonstration or throw some rocks through a classroom window or something, but that's precisely the sense we have to expand until we can sense that our lives themselves are political in the most functional -that we LIVE our politics. The question is not, are you "political," but, what kind of politics do you practice? Can you dig that?

It is in Western society that politics are most purposefully separated from daily life and treated as something superfluous to it. The average Westerner is brought up to believe that politics is activity which is carried on by professional politicians and which has very little to do with his or her life except for a few brief months every two or four years when politicians are "running for office." In the past few years another sense of "political" has emerged which is really no different: young people who concern themselves with the condition of their world and act in a more or less organized fashion to change it are "political" while the masses of their brothers and sisters who do not organize themselves are "not political" at all.

This new sense still perpetuates the separation of the political from the rest of life, and one chooses either to"be political" or not to "be political" depending on one's desire to take part in demonstrations, go to SDS meetings, join the Student Mobilization Committee, etc. And even with the "political" people there is still a great gap between their "politics" and their daily lives; that is, unless they become full-time politicos and spend all their time going to meetings, planning demonstrations, reading political literature, etc.

But what I'm talking about is a way of life in which the "political" is fully integrated with all other areas of human experience so that one's politics can be seen in one's total life-style, in the sense that one's whole life is the continuous blow against the established order, which has tremendous force and which strikes fear into the hearts of the pigs in power--so much fear, in fact, that they do not hesitate to shoot down, their own sons and daughters.

I'm talking about James Rector and Kent State brothers and sisters when I say it that way, and not about Sandy Garland and Scott Kabran and Greg Walls and Tony Brown who were murdered by Sandy's father acting not as part of an organized force like the National Guard or the Alameda County Sheriff's Dept. Yet it's all part of the same thing, because Arville Garland is just a powerless version of Richard Nixon or Ronald Reagan or David Rockefeller; they share the same culture and the same political beliefs. Arvilie Garland (and the "millions of parents" like him) are taught that their interests are the same as those of the pigs who do have power, that what affects the pigs adversely also affects them in the same term. They believe that, as Engine Charlie Wilson said, back in the good old Ike Eisenhower days, "what's good for General Motors is good for the country. " And they act accordingly--they do what is prescribed for keeping General Motors and its accomplices in control of their society. When the National Guard, acting under orders, shoots down four young people at Kent State University their example is immediately followed by a man like Arville Garland, a member of the Detroit Police Emergency Reserves, who picks up his guns and drills his own daughter and her "hippie friends. " (continued on next page)