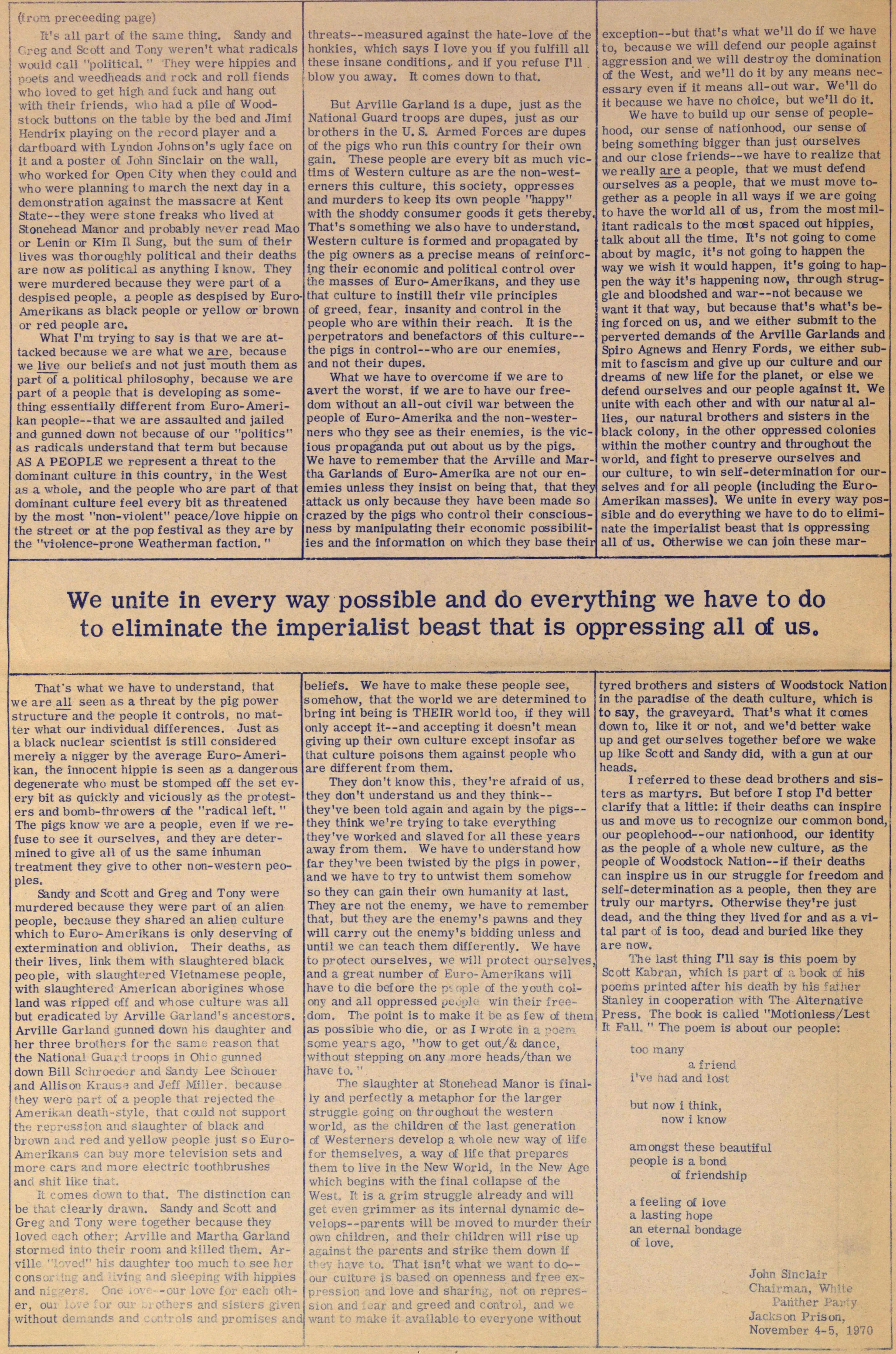 WE UNITE IN EVERY WAY POSSIBLE AND DO EVERYTHING WE HAVE TO DO TO ELIMINATE THE IMPERIALIST BEAST THAT IS OPPRESSING ALL OF US.

It's all part of the same thing. Sandy and Greg and Scott and Tony weren't what radicals would call "political. " They were hippies and poets and weedheads and rock and roll fiends who loved to get high and fuck and hang out with their friends, who had a pile of Woodstock buttons on the table by the bed and Jimi Hendrix playing on the record player and a dartboard with Lyndon Johnson's ugly face on it and a poster of John Sinclair on the wall, who worked for Open City when they could and who were planning to march the next day in a demonstration against the massacre at Kent State--they were stone freaks who lived at Stonehead Manor and probably never read Mao or Lenin or Kim Il Sung, but the sum of their lives was thoroughly political and their deaths are now as political as anything I know. They were murdered because they were part of a despised people, a people as despised by Euro-Amerikans as black people or yellow or brown or red people are.

What I'm trying to say is that we are attacked because we are what we are, because we live our beliefs and not just mouth them as part of a political philosophy, because we are part of a people that is developing as something essentially different from Euro-Amerikan people - that we are assaulted and jailed and gunned down not because of our "politics" as radicals understand that term but because AS A PEOPLE we represent a threat to the dominant culture in this country, in the West as a whole, and the people who are part of that dominant culture feel every bit as threatened by the most "non-violent" peace/love hippie on the street or at the pop festival as they are by the "violence-prone Weatherman faction."

That's what we have to understand, that we are all seen as a threat by the pig power structure and the people it controls, no matter what our individual differences. Just as a black nuclear scientist is still considered merely a nigger by the average Euro-Amerikan, the innocent hippie is seen as a dangerous degenerate who must be stomped off the set every bit as quickly and viciously as the protesters and bomb-throwers of the "radical left. " The pigs know we are a people, even if we refuse to see it ourselves, and they are determined to give all of us the same inhuman treatment they give to other non-western peoples.

Sandy and Scott and Greg and Tony were murdered because they were part of an alien people, because they shared an alien culture which to Euro-Amerikans is only deserving of extermination and oblivion. Their deaths, as their lives, link them with slaughtered black people, with slaughtered Vietnamese people, with slaughtered American aborigines whose land was ripped off and whose culture was all but eradicated by Arville Garland's ancestors. Arville Garland gunned down his daughter and her three brothers for the same reason that the National Guard troops in Ohio gunned down Bill Schroeder and Sandy Lee Schouer and Allison Krause and Jeff Miller. Because they were part of a people that rejected the Amerikan death-style, that could not support the repression and slaughter of black and brown and red and yellow people just so Euro-Ameridans can buy more television sets and more cars and more electric toothbrushes and shit like that.

It comes down to that. The distinction can be that clearly drawn. Sandy and Scott and Greg and Tony were together because they loved each other; Arville and Martha Garland stormed into their room and killed them. Arville loved his daughter too much to see her consorting  and living and sleeping with hippies and niggers.  One love-our love for each other, our love for our brothers and sisters given without demands and controls and promises and threats - measured against the hate-love of the honkies, which says I love you if you fulfill all these insane conditions, and if you refuse I'll blow you away. It comes down to that.

But Arville Garland is a dupe, just as the National Guard troops are dupes, just as our brothers in the U.S. Armed Forces are dupes of the pigs who run this country for their own gain. These people are every bit as much victims of Western culture as are the non-westerners this culture, this society, oppresses and murders to keep its own people "happy" with the shoddy consumer goods it gets thereby. That's something we also have to understand. Western culture is formed and propagated by the pig owners as a precise means of reinforcing their economic and political control over the masses of Euro-Amerikans, and they use that culture to instill their vile principles of greed, fear, insanity and control in the people who are within their reach. It is the perpetrators and benefactors of this culture - the pigs in control--who are our enemies, and not their dupes.

What we have to overcome if we are to avert the worst, if we are to have our freedom without an all-out civil war between the people of Euro-Amerika and the non-westerners who they see as their enemies, is the vicious propaganda put out about us by the pigs. We have to remember that the Arville and Martha Garlands of Euro-Amerika are not our enemies unless they insist on being that, that they attack us only because they have been made so crazed by the pigs who control their consciousness by manipulating their economic possibilities and the in-formation on which they base their beliefs. We have to make these people see, somehow, that the world we are determined to bring into being is THEIR world too, if they will only accept it--and accepting it doesn't mean giving up their own culture except insofar as that culture poisons them against people who are different from them.

They don 't know this, they're afraid of us. they don't understand us and they think-they've been told again and again by the pigs-they think we're trying to take everything they've worked and slaved for all these years away from them. We have to understand how far they've been twisted by the pigs in power, and we have to try to untwist them somehow so they can gain their own humanity at last. They are not the enemy, we have to remember that, but they are the enemy's pawns and they will carry out the enemy's bidding unless and until we can teach them differently. We have to protect ourselves, we will protect ourselves, and a great number of Euro-Amerikans will have to die before the people of the youth colony and all oppressed people win their freedom. The point is to make it be as few of them as possible who die, or as I wrote in a poem some years ago, "how to get out/& dance, without stepping on any more heads/than we have to.''

The slaughter at Stonehead Manor is finally and perfectly a metaphor for the larger struggle going on throughout the western world, as the children of the last generation of Westerners develop a whole new way of life for themselves, a way of life that prepares them to live in the New World, in the New Age which begins with the final collapse of the West. It is a grim struggle already and will get even grimmer as its internal dynamic develops - parents will be moved to murder their own children, and their children will rise up against the parents and strike them down if they have to. That isn't what we want to do - our culture is based on openness and free expression and love and sharing, not on repression and fear and greed and control, and we want to make it available to everyone without exception- but that's what we'll do if we have to, because we will defend our people against aggression and we will destroy the domination of the West, and we'll do it by any means necessary even if it means all-out war. We'll do it because we have no choice, but we'll do it.

We have to build up our sense of people-hood, our sense of nationhood, our sense of being something bigger than just ourselves and our close friends- we have to realize that we really are a people, that we must defend ourselves as a people, that we must move together as a people in all ways if we are going to have the world all of us, from the most militant radicals to the most spaced out hippies, talk about all the time. It's not going to come about by magic, it's not going to happen the way we wish it would happen, it's going to happen the way it's happening now, through struggle and bloodshed and war--not because we want it that way, but because that's what's being forced on us, and we either submit to the perverted demands of the Arville Garlands and Spiro Agnews and Henry Fords, we either submit to fascism and give up our culture and our dreams of new life for the planet, or else we defend ourselves and our people against it. We unite with each other and with our natural allies, our natural brothers and sisters in the black colony, in the other oppressed colonies within the mother country and throughout the world, and fight to preserve ourselves and our culture, to win self-determination for ourselves and for all people (including the Euro-Amerikan masses). We unite in every way possible and do everything we have to do to eliminate the imperialist beast that is oppressing all of us. Otherwise we can join these martyred brothers and sisters of Woodstock Nation in the paradise of the death culture, which is to say, the graveyard. That's what it comes down to, like it or not, and we'd better wake up and get ourselves together before we wake up like Scott and Sandy did, with a gun at our heads.

I referred to these dead brothers and sisters as martyrs. But before I stop I'd better clarify that a little: if their deaths can inspire us and move us to recognize our common bond, our people-hood - our nationhood, our identity as the people of a whole new culture, as the people of Woodstock Nation - if their deaths can inspire us in our struggle for freedom and self-determination as a people, then they are truly our martyrs. Otherwise they're just dead, and the thing they lived for and as a vital part of is too, dead and buried like they are now.

The last thing I'll say is this poem by Scott Kabran, which is part of a book of his poems printed after his death by his father Stanley in cooperation with The Alternative Press. The book is called "Motionless/Lest It Fall." The poem is about our people:

i've had and lost

but now i think,

people is a bond

a feeling of love