Picking Up The Gun At Chrysler 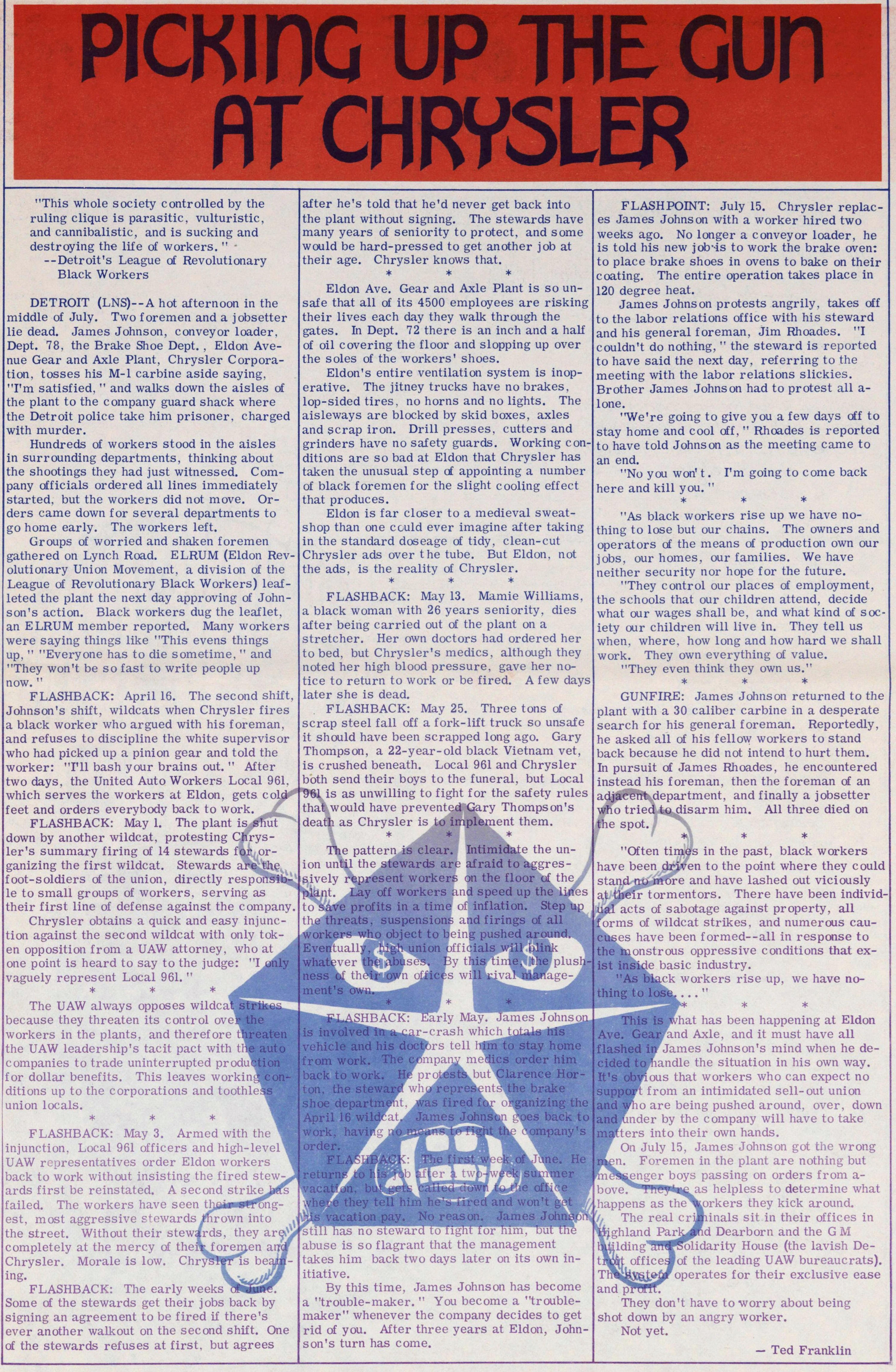 PICKING UP THE GUN AT CHRYSLER

"This whole society controlled by the ruling clique is parasitic, vulturistic, and cannibalistic, and is sucking and destroying the life of workers. "

DETROIT (LNS)- A hot afternoon in the middle of July. Two foremen and a jobsetter lie dead. James Johnson, conveyor loader, Dept. 78, the Brake Shoe Dept. , Eldon Avenue Gear and Axle Plant, Chrysler Corporation, tosses his M-l carbine aside saying, "I'm satisfied, " and walks down the aisles of the plant to the company guard shack where the Detroit police take him prisoner, charged with murder.

Hundreds of workers stood in the aisles in surrounding departments, thinking about the shootings they had just witnessed. Company officials ordered all lines immediately started, but the workers did not move. Orders came down for several departments to go home early. The workers left.

Groups of worried and shaken foremen gathered on Lynch Road. ELRUM (Eldon Revolutionary Union Movement, a division of the League of Revolutionary Black Workers) leafleted the plant the next day approving of Johnson's action. Black workers dug the leaflet, an ELRUM member reported. Many workers were saying things like "This evens things up, " "Everyone has to die sometime, " and "They won't be so fast to write people up now. "

FLASHBACK: April 16. The second shift, Johnson's shift, wildcats when Chrysler fires a black worker who argued with his foreman, and refuses to discipline the white supervisor who had picked up a pinion gear and told the worker: "I'll bash your brains out. " After two days, the United Auto Workers Local 961. which serves the workers at Eldon, gets cold feet and orders everybody back to work.

FLASHBACK: May 1. The plant is shut down by another wildcat, protesting Chrysler's summary firing of 14 stewards for organizing the first wildcat. Stewards are the foot-soldiers of the union, directly responsible to small groups of workers, serving as their first line of defense against the company.

Chrysler obtains a quick and easy injunction against the second wildcat with only token opposition f rom a UAW attorney, who at one point is heard to say to the judge: "l only vaguely represent Local 961. "

The UAW always opposes wildcat strikes because they threaten its control over the workers in the plants, and therefore threaten the UAW leadership's tacit pact with tile auto companies to trade uninterrupted production for dollar benefits. This leaves working conditions up to the corporations and toothless union local.

FLASHBACK: May 3. Armed with the W injunction. Local 961 officers and high-level UAW representatives order Eldon workers back to work without insisting the fired stewards first be reinstated. A second strikes failed. The workers have seen their strongest, most aggressive stewards thrown into the street. Without their stewards, they are completely at the mercy of their foremen and Chrysler. Morale is low. Chrysler is beam.

FLASHBACK: The early weeks of June. Some of the stewards get their jobs back by signing an agreement to be fired if there's ever another walkout on the second shift. One of the stewards refuses at first, but agrees after he's told that he'd never get back into the plant without signing. The stewards have many years of seniority to protect, and some would be hard-pressed to get another job at their age. Chrysler knows that.

Eldon Ave. Gear and Axle Plant is so unsafe that all of its 4500 employees are risking their lives each day they walk through the gates. In Dept. 72 there is an inch and a half of oil covering the floor and slopping up over the soles of the workers' shoes.

Eldon's entire ventilation system is inoperative. The jitney trucks have no brakes, lop-sided tires, no horns and no lights. The aisleways are blocked by skid boxes, axles and scrap iron. Drill presses, cutters and grinders have no safety guards. Working conditions are so bad at Eldon that Chrysler has taken the unusual step of appointing a number of black foremen for the slight cooling effect that produces.

Eldon is far closer to a medieval sweatshop than one could ever imagine after taking in the standard doseage of tidy, clean-cut Chrysler ads over the tube. But Eldon, not the ads, is the reality of Chrysler.

FLASHBACK: May 13. Mamie Williams, a black woman with 26 years seniority. dies after being carried out of the plant on a stretcher. Her own doctors had ordered her to bed, but Chrysler's medics, although they noted her high blood pressure, gave her notice to return to work or be fired. A few days later she is dead.

FLASHBACK: May 25. Three tons of scrap steel fall off a fork-lift truck so unsafe it should have been scrapped long ago. Gary Thompson, a 22-year-old black Vietnam vet, is crushed beneath. Local 961 and Chrysler both send their boys to the funeral, but Local 961 is as unwilling to fight f or the safety rules that would have prevent ed Gary Thompson's death as Chrysler is to implement them.

The pattern is clear. Intimidate the union until the stewards are afraid to aggressively represent workers on the floor of the plant. Lay off workers and speed up the lines to save profits in a time of inflation. Step up the threats, suspensions and firings of all workers who object to being pushed around. Eventually, high union officials will blink whatever the abuses, By this time, the plushness of their own offices will management 's own.

FLASHBACK: Early May. James Johnson is involved in car-crash which his and his doctors tell him to stay home from work. The company medics order him back to work. He protests but Clarence Horton, the steward who represents the brake shoe department, was fired for organizing the April 16 wildcat. James Johnson goes back to work, having no means to fight the company's order.

FLASHBACK: The first week of June. He returns to his job after a two-week summer vacation, but gets called down to the office where they tell him he's fired and won't get his vacation pay. No reason. James Johnson still has no steward to fight for him, but the abuse is so flagrant that the management takes him back two days later on its own initiative.

By this time, James Johnson has become a maker. " You become a "trouble-maker" whenever the company decides to get rid of you. After three years at Eldon, Johnson's turn has come.

FLASHPOINT: July 15. Chrysler replaces James Johnson with a worker hired two weeks ago. No longer a conveyor loader, he is told his new job is to work the brake oven: to place brake shoes in ovens to bake on their coating. The entire operation takes place in 120 degree heat.

"We're going to give you a few days off to stay home and cool off, " Rhoades is reported to have told Johnson as the meeting carne to an end.

"As black workers rise up we have nothing to lose but our chains. The owners and operators of the means of production own our jobs, our homes, our families. We have neither security nor hope for the future.

"They control our places of employment, the schools that our children attend, decide what our wages shall be, and what kind of society our children will live in. They teil us when. where, how long and how hard we shall work. They own everything of value.

"They even think they own us."

GUNFIRE: James Johnson returned to the plant with a 30 caliber carbine in a desperate search for his general foreman. Reportedly, he asked all of his fellow workers to stand back because he did not intend to hurt them. In pursuit of James Rhoades, he encountered instead his foreman, then the foreman of an adjacent department, and finally a jobsetter who tried to disarm him. All three died on the spot.

"Often times in the past, black workers have been driven to the point where they could stand no more and have lashed out viciously at their tormentors. There have been individual acts of sabotage against property, all forms of wildcat strikes, and numerous caucuses have been formed - all in response to the monstrous oppressive conditions that exist inside basic industry.

This is what has been happening at Eldon Ave. Gear and Axle, and it must have all  flashed in James Johnson's mind when he decided to handle the situation in his own way. It's obvious that workers who can expect no support from an intimidated sell-out union and who are being pushed around, over, down and under by the company will have to take matters into their own hands.

On July 15, James Johnson got the wrong men. Foremen in the plant are nothing but messenger boys passing on orders from above. They're as helpless to determine what happens as workers they kick around.

The real criminals sit in their offices in Highland Park and Dearborn and the G M building and Solidarity House (the lavish Detroit office of the leading UAW bureaucrats). The system operates for their exclusive ease and profit.

They don't have to worry about being shot down by an angry worker.