C. I. A. Conspiracy Trial Section, The Trial So Far 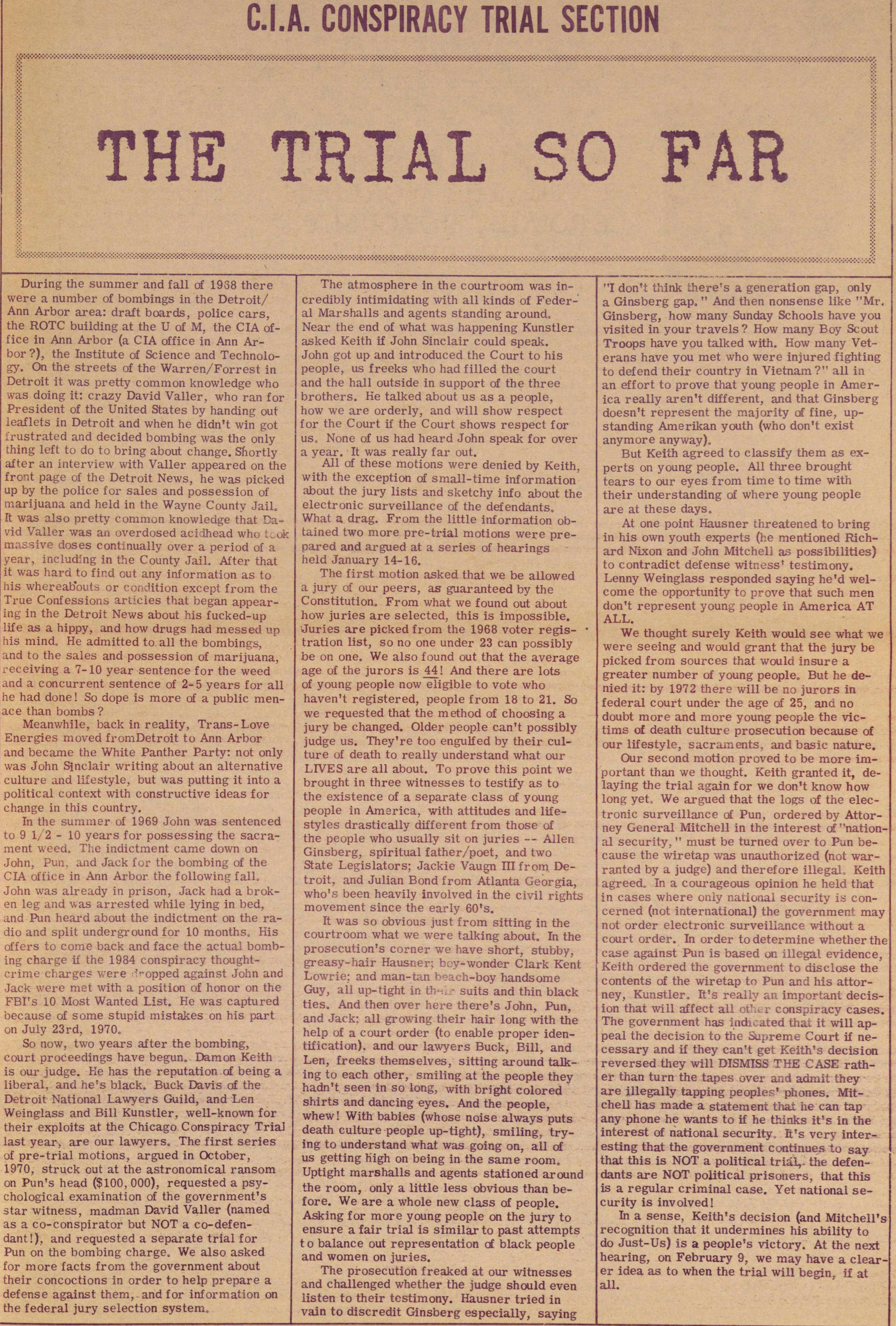 During the summer and fall of 1938 there were a number of bombings in the Detroit/Ann Arbor area: draft boards, police cars, the ROTC building at the U of M, the CIA office in Ann Arbor (a CIA office in Ann Arbor ?), the Institute of Science and Technology. On the streets of the Warren/Forrest in Detroit it was pretty common knowledge who was doing it: crazy David Valler, who ran for President of the United States by handing out leaflets in Detroit and when he didn't win got frustrated and decided bombing was the only thing left to do to bring about change. Shortly after an interview with Valler appeared on the front page of the Detroit News, he was picked up by the police for sales and possession of marijuana and held in the Wayne County Jail. It was also pretty common knowledge that David Valler was an overdosed acidhead who took massive doses continually over a period of a year, including in the County Jail. After that it was hard to find out any information as to his whereabouts or condition except from the True Confessions articles that began appearing in the Detroit News about his fucked-up life as a hippy, and how drugs had messed up his mind. He admitted to all the bombings, and to the sales and possession of marijuana, receiving a 7-10 year sentence for the weed and a concurrent sentence of 2-5 years for all he had done! So dope is more of a public menace than bombs?

Meanwhile, back in reality, Trans-Love Energies moved from Detroit to Ann Arbor and became the White Panther Party: not only was John Sinclair writing about an alternative culture and lifestyle, but was putting it into a political context with constructive ideas for change in this country.

In the summer of 1969 John was sentenced to 9 1/2 - 10 years for possessing the sacrament weed. The indictment came down on John, Pun. and Jack for the bombing of the CIA office in Ann Arbor the following fall. John was already in prison, Jack had a broken leg and was arrested while lying in bed, and Pun heard about the indictment on the radio and split underground for 10 months. His offers to come back and face the actual bombing charge if the 1984 conspiracy thought-crime charges were dropped against John and Jack were met with a position of honor on the FBI's 10 Most Wanted List. He was captured because of some stupid mistakes on his part on July 23rd, 1970.

So now, two years after the bombing, court proceedings have begun. Damon Keith is our judge. He has the reputation of being a liberal, and he's black. Buck Davis of the Detroit National Lawyers Guild, and Len Weinglass and Bill Kunstler, well-known for their exploits at the Chicago Conspiracy Trial last year, are our lawyers. The first series of pre-trial motions, argued in October, 1970, struck out at the astronomical ransom on Pun's head ($100,000), requested a psychological examination of the government's star witness, madman David Valler (named as a co-conspirator but NOT a co-defendant!), and requested a separate trial for Pun on the bombing charge. We also asked for more facts from the government about their concoctions in order to help prepare a defense against them, and for information on the federal jury selection system.

The atmosphere in the courtroom was incredibly intimidating with all kinds of Federal Marshalls and agents standing around. Near the end of what was happening Kunstler asked Keith if John Sinclair could speak. John got up and introduced the Court to his people, us freeks who had filled the court and the hall outside in support of the three brothers. He talked about us as a people, how we are orderly, and will show respect for the Court if the Court shows respect for us. None of us had heard John speak for over a year. It was really far out.

All of these motions were denied by Keith, with the exception of small-time information about the jury lists and sketchy info about the electronic surveillance of the defendants. What a drag. From the little information obtained two more pre-trial motions were prepared and argued at a series of hearings held January 14-16.

The first motion asked that we be allowed a jury of our peers, as guaranteed by the Constitution. From what we found out about how juries are selected, this is impossible. Juries are picked from the 1968 voter registration list, so no one under 23 can possibly be on one. We also found out that the average age of the jurors is 44! And there are lots of young people now eligible to vote who haven't registered, people from 18 to 21. So we requested that the method of choosing a jury be changed. Older people can't possibly judge us. They're too engulfed by their culture of death to really understand what our LIVES are all about. To prove this point we brought in three witnesses to testify as to the existence of a separate class of young people in America, with attitudes and lifestyles drastically different from those of the people who usually sit on juries - Allen Ginsberg, spiritual father/poet, and two State Legislators; Jackie Vaugn III from Detroit, and Julian Bond from Atlanta Georgia, who's been heavily involved in the civil rights movement since the early 60's.

It was so obvious just from sitting in the courtroom what we were talking about. In the prosecution's corner we have short, stubby, greasy-hair Hausner; boy-wonder Clark Kent Lowrie; and man-tan beach-boy hands ome Guy, all up-tight in their suits and thin black ties. And then over here there's John, Pun, and Jack: all growing their hair long with the help of a court order (to enable proper identification), and our lawyers Buck, Bill, and Len, freeks themselves, sitting around talking to each other, smiling at the people they hadn't seen in so long, with bright colored shirts and dancing eyes. And the people, whew! With babies (whose noise always puts death culture people up-tight), smiling, trying to understand what was going on, all of us getting high on being in the same room. Uptight marshalls and agents stationed around the room, only a little less obvious than before. We are a whole new class of people. Asking for more young people on the jury to ensure a fair trial is similar to past attempts to balance out representation of black people and women on juries.

The prosecution freaked at our witnesses and challenged whether the judge should even listen to their testimony. Hausner tried in vain to discredit Ginsberg especially, saying "I don't think there's a generation gap, only a Ginsberg gap." And then nonsense like "Mr. Ginsberg, how many Sunday Schools have you visited in your travels? How many Boy Scout Troops have you talked with. How many Veterans have you met who were injured fighting to defend their country in Vietnam?" all in an effort to prove that young people in America really aren't different, and that Ginsberg doesn't represent the majority of fine, upstanding Amerikan youth (who don't exist anymore anyway).

But Keith agreed to classify them as experts on young people. All three brought tears to our eyes from time to time with their understanding of where young people are at these days.

At one point Hausner threatened to bring in his own youth experts (he mentioned Richard Nixon and John Mitchell as possibilities) to contradict defense witness' testimony. Lenny Weinglass responded saying he'd welcome the opportunity to prove that such men don't represent young people in America AT ALL.

We thought surely Keith would see what we were seeing and would grant that the jury be picked from sources that would insure a greater number of young people. But he denied it: by 1972 there will be no jurors in federal court under the age of 25, and no doubt more and more young people the victims of death culture prosecution because of our lifestyle, sacraments, and basic nature.

Our second motion proved to be more important than we thought. Keith granted it, delaying the trial again for we don't know how long yet. We argued that the logs of the electronic surveillance of Pun, ordered by Attorney General Mitchell in the interest of "national security, " must be turned over to Pun because the wiretap was unauthorized (not warranted by a judge) and therefore illegal. Keith agreed. In a courageous opinion he held that in cases where only national security is concerned (not international) the government may not order electronic surveillance without a court order. In order to determine whether the case against Pun is based on illegal evidence, Keith ordered the government to disclose the contents of the wiretap to Pun and his attorney, Kunstler. It's really an important decision that will affect all other conspiracy cases. The government has indicated that it will appeal the decision to the Supreme Court if necessary and if they can't get Keith's decision reversed they will DISMISS THE CASE rather than turn the tapes over and admit they are illegally tapping peoples' phones. Mitchell has made a statement that he can tap any phone he wants to if he thinks it's in the interest of national security. It's very interesting that the government continues to say that this is NOT a political trial, the defendants are NOT political prisoners, that this is a regular criminal case. Yet national security is involved!

In a sense, Keith's decision (and Mitchell's recognition that it undermines his ability to do Just-Us) is a people's victory. At the next hearing, on February 9, we may have a clearer idea as to when the trial will begin, if at all.