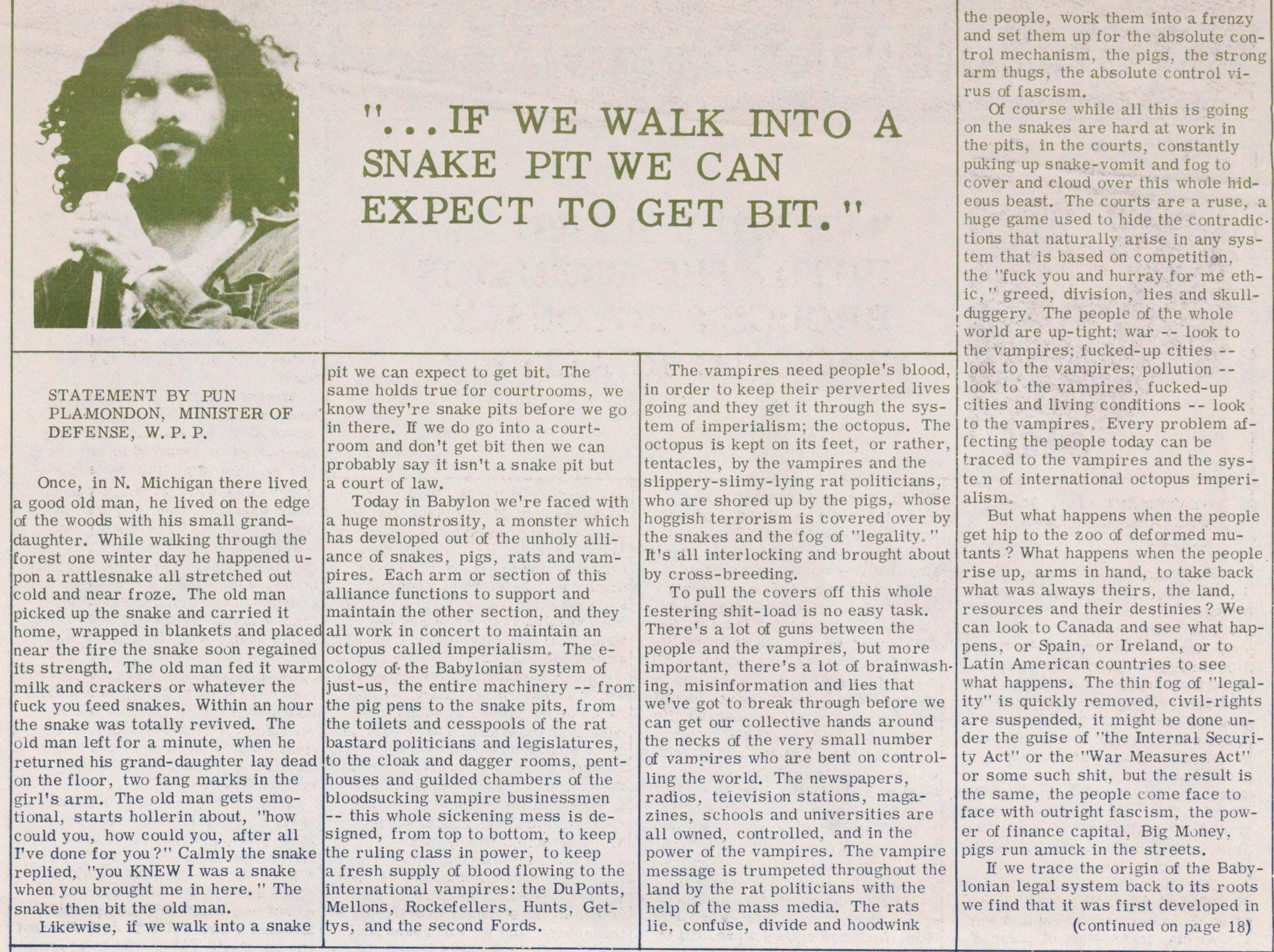 Once, in N. Michigan there lived a good old man, he lived on the edge of the woods with his small granddaughter. While walking through the forest one winter day he happened upon a rattlesnake all stretched out cold and near froze. The old man picked up the snake and carried it home, wrapped in blankets and placed near the fire the snake soon regained its strength. The old man fed it warm milk and crackers or whatever the fuck you feed snakes. Within an hour the snake was totally revived. The old man left for a minute, when he returned his daughter lay dead on the floor, two fang marks in the girl's arm. The old man gets emotional, starts hollerin about, "how could you, how could you, after all I've done for you?" Calmly the snake replied, "you KNEW I was a snake when you brought me in here." The snake then bit the old man.

Likewise, if we walk into a snake pit we can expect to get bit. The same holds true for courtrooms, we know they're snake pits before we go in there. If we do go into a courtroom and don 't get bit then we can probably say it isn't a snake pit but a court of law.

Today in Babylon we're faced with a huge monstrosity, a monster which has developed out of the unholy alliance of snakes, pigs, rats and vampires. Each arm or section of this alliance functions to support and maintain the other section, and they all work in concert to maintain an octopus called imperialism. The ecology of the Babylonian system of just-us, the entire machinery -- from the pig pens to the snake pits, from the toilets and cesspools of the rat bastard politicians and legislatures, to the cloak and dagger rooms, penthouses and guilded chambers of the bloodsucking vampire businessmen -- this whole sickening mess is designed, from top to bottom, to keep the ruling class in power, to keep a fresh supply of blood flowing to the international vampires: the DuPonts, Mellons, Rockefellers. Hunts, Gettys, and the second Fords.

The vampires need people's blood, in order to keep their perverted lives going and they get it through the system of imperialism; the octopus. The octopus is kept on its feet, or rather, tentacles, by the vampires and the slippery-slimy-lying rat politicians, who are shored up by the pigs, whose hoggish terrorism is covered over by the snakes and the fog of "legality. " It's all interlocking and brought about by cross-breeding.

To pull the covers off this whole festering shit-load is no easy task. There's a lot of guns between the people and the vampires, but more important, there's a lot of brainwashing, misinformation and lies that we've got to break through before we can get our collective hands around the necks of the very small number of vampires who are bent on controlling the world. The newspapers, radios, television stations, magazines, schools and universities are all owned, controlled, and in the power of the vampires. The vampire message is trumpeted throughout the land by the rat politicians with the help of the mass media. The rats lie, confuse, divide and hoodwink the people, work them into a frenzy and set them up for the absolute control mechanism, the pigs, the strong arm thugs, the absolute control virus of fascism.

But what happens when the people get hip to the zoo of deformed mutants ? What happens when the people rise up, arms in hand, to take back what was always theirs, the land, resources and their destinies? We can look to Canada and see what happens, or Spain, or Ireland, or to Latin American countries to see what happens. The thin fog of "legality" is quickly removed, civil-rights are suspended, it might be done under the guise of "the Internal Security Act" or the "War Measures Act" or some such shit, but the result is the same, the people come face to face with outright fascism, the power of finance capital, Big Money, pigs run amuck in the streets.

England, long before the first invaders ever set foot on the shores of Babylon. In England, the King or Queen were absolute monarchs, supreme rulers; they were the lawmakers, courts and executioners all wrapped up in one. In due time people rose up and demanded to control their own lives, their land and their destinies. In this case the King gets up-tight, he calls a bunch of his buddies and pals together, these are the cats he plays golf with all the time.

"Look here, " he says, "we gotta set up this system ya see, we'll cop us some robes, some wigs, and some of those little wooden hammers, the whole shabang, then when the people fuck-up, refuse to pay taxes, or give up their shit, or the young guys won't go to war, or the young women won't come to the castle, ya see, we'll just carry 'em before you guys and you can hold court and roll their heads. I'll be covered, ya see, and you guys will be covered 'cause I'm going to write up these laws and you guys will just be following the letter of the law. I'll make the laws to protect us and see to it that we continue to rip-off the people. Now if ya fuckup I'm taking back all the shit, the robes, the wigs, the hammers, the whole smear, and you'll be in the gutter, so ya better not fuckup. Hey! you guys wanna go bowling tonite?"

Many of you in the Detroit area will remember the armed assault by the Detroit Hog Squad against the Republic of New Africa during the RNA's annual convention at the New Bethel Church. The assault resulted in one pig dead, another wounded and over 100 members of the RNA busted. Detroit Recorders Court Judge George Crockett (SP) ordered those being held to be released because ACCORDING TO THE LAW THEY WERE HELD ILLEGALLY. Judge Crockett, following the law as, by law, he is charged to do, released those held. By following the letter of the law Judge Crockett (SP) unleashed the wrath of the entire power structure of Michigan, because this Judge applied the law on behalf of the people and not the ruling class he was attacked from all sides; rats, pigs, vampires, and snakes stood in line and tripped over each other to attack and condemn his gallant stand in the face of the entire racist, fascist political machinery of the State. Shades of the old King ruse.

So sisters and brothers once over lightly, we got us a hybred mutant on our hands, goes under the name of imperialism, the octopus, its tentacles stretch to every corner of the earth. Within this octopus, this system of world domination, we have three levels of oppression. Starting from the top: the cats you never see; cause they're vampires, blood-suckers, capitalists - they need the people's blood, the oil of the Middle East and Latin America, diamonds, oil and minerals of Africa, minerals, rubber and military bases in Indo-China. Then these super-businessmen need, what they call "open markets", to sell the worthless products that are made here in Babylon; Coca-Cola, electric can-openers, brassieres and vacuum cleaners. In order to sell this bullshit around the world the people's land and culture must first be destroyed and then rebuilt in the image of Babylon. The vampires must turn the whole world into a huge suburb/supermarket complex in order to sell their products. Check out Japan, South Korea, South Vietnam, Germany.

Next comes the slippery slimy sewer-rats, the lying politicians. Some of these beasts have cross-bred with the vampires, which gives us a new creature, like Rockefeller, Eastland and their ilk. Primarily the rats are the front men for the vampires. Their job is to take orders from the rats who take orders from the vampires who control the people. The pigs are just armed thugs for the international criminals. Since they are international they have an international pig force too, the military. These pigs keep everyone in line and keep the whole octopus running smoothly.

Now this whole system is covered over in a shroud of legality by the snakes and the snake pits, the courts. The courts are the biggest ruse since hecter was a pup.

Huey P. Newton teaches us that we must exhaust all legal means, 'cause Huey knows that we must show the people in no uncertain terms that it is the octopus, the power structure, that is their enemy and we in fact are their friends. One way of doing this is to take the biggest ruse of all and use that to expose the rest of the octopus to the people. This will be the goal of the WPP in the upcoming CIA Conspiracy trial. The WPP does not engage in military attacks against the ruling class; we are an above-ground organization dedicated to serving and organizing the people to prepare to Seize the Time. We know where the real Conspiracy lies, it lies with the CIA, the FBI and the rest of the power structure. At this time we don't know if our Judge is part of the Conspiracy or not, so we don't know if he's a snake or not. Only time and the trial will tell. WE don't have very many legal means left, so we should make them all count. Me? I'll be wearing my snake boots, just in case.