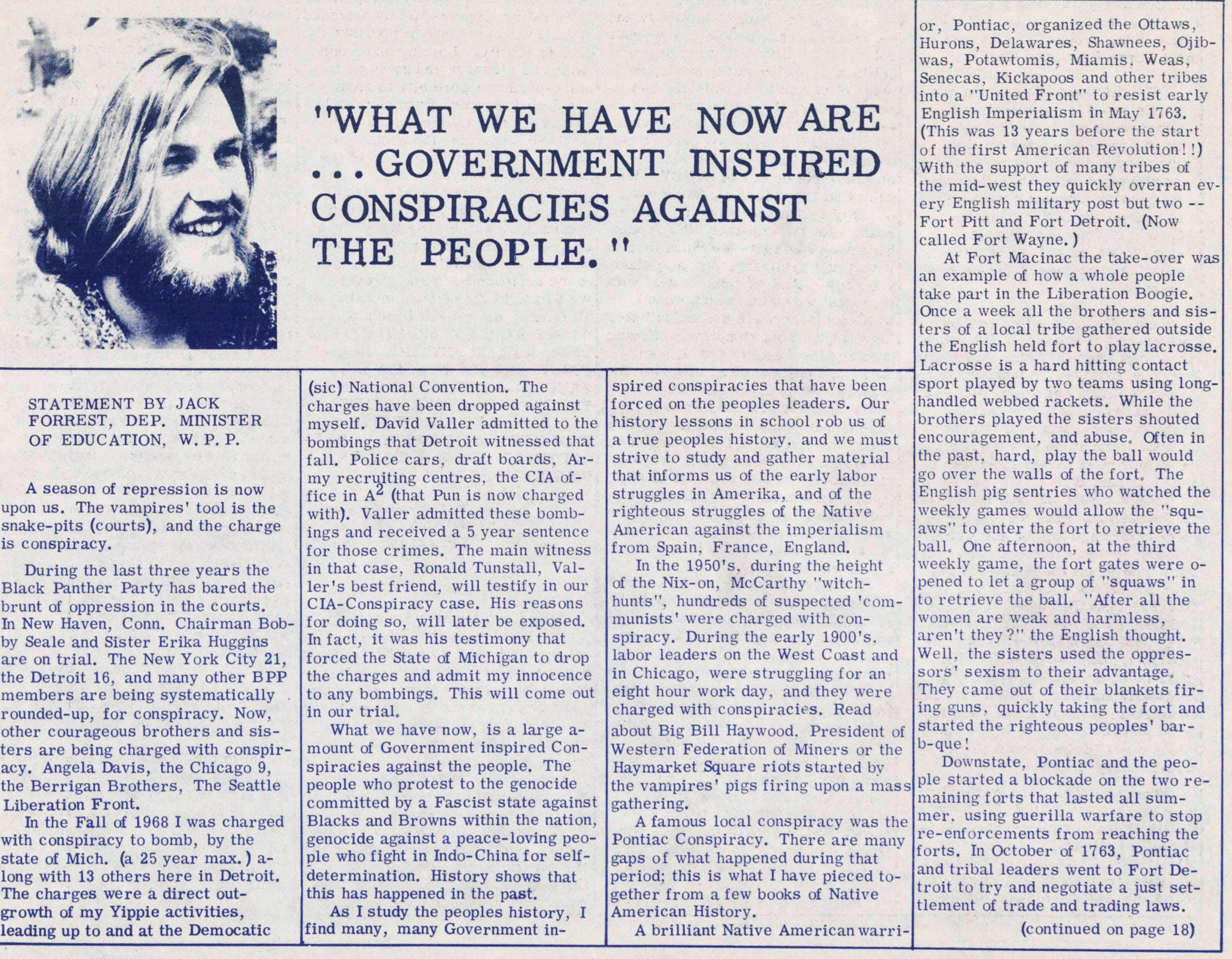 "What we have now are...government inspired conspiracies against the people."

A season of repression is now upon us. The vampires' tool is the snake-pits (courts), and the charge is conspiracy.

During the last three years the Black Panther Party has bared the brunt of oppression in the courts. In New Haven, Conn. Chairman Bobby Seale and Sister Erika Huggins are on trial. The New York City 21, the Detroit 16, and many other BPP members are being systematically rounded-up, for conspiracy. Now, other courageous brothers and sisters are being charged with conspiracy. Angela Davis, the Chicago 9, the Berrigan Brothers, The Seattle Liberation Front.

In the Fall of 1968 I was charged with conspiracy to bomb, by the state of Mich. (a 25 year max.) along with 13 others here in Detroit. The charges were a direct outgrowth of my Yippie activities, leading up to and at the Democatic (sic) National Convention. The charges have been dropped against myself. David Valler admitted to the bombings that Detroit witnessed that fall. Police cars, draft boards, Army recruiting centres, the CIA office in A2 (that Pun is now charged with). Valler admitted these bombings and received a 5 year sentence for those crimes. The main witness in that case, Ronald Tunstall, Valler's best friend, will testify in our CIA-Conspiracy case. His reasons for doing so, will later be exposed. In fact, it was his testimony that forced the State of Michigan to drop the charges and admit my innocence to any bombings. This will come out in our trial.

What we have now, is a large amount of Government inspired Conspiracies against the people. The people who protest to the genocide committed by a Fascist state against Blacks and Browns within the nation, genocide against a peace-loving people who fight in Indo-China for self-determination. History shows that this has happened in the past.

As I study the peoples history, I find many, many Government inspired conspiracies that have been forced on the peoples leaders. Our history lessons in school rob us of a true peoples history, and we must strive to study and gather material that informs us of the early labor struggles in Amerika, and of the righteous struggles of the Native American against the imperialism from Spain, France, England.

In the 1950's, during the height of the Nix-on, McCarthy "witch-hunts," hundreds of suspected 'communists' were charged with conspiracy. During the early 1900's, labor leaders on the West Coast and in Chicago, were struggling for an eight hour work day, and they were charged with conspiracies. Read about Big Bill Haywood, President of Western Federation of Miners or the Haymarket Square riots started by the vampires' pigs firing upon a mass gathering.

A famous local conspiracy was the Pontiac Conspiracy. There are many gaps of what happened during that period; this is what I have pieced together from a few books of Native American History.

A brilliant Native American warrior, Pontiac, organized the Ottaws, Hurons, Delawares, Shawnees, Ojibwas, Potawtomis, Miamis, Weas, Senecas, Kickapoos and other tribes into a "United Front" to resist early English Imperialism in May 1763. (This was 13 years before the start of the first American Revolution! !) With the support of many tribes of the mid-west they quickly overran every English military post but two -- Fort Pitt and Fort Detroit. (Now called Fort Wayne.)

At Fort Macinac the take-over was an example of how a whole people take part in the Liberation Boogie. Once a week all the brothers and sisters of a local tribe gathered outside the English held fort to play lacrosse. Lacrosse is a hard hitting contact sport played by two teams using long-handled webbed rackets. While the brothers played the sisters shouted encouragement, and abuse. Often in the past, hard, play the ball would go over the walls of the fort. The English pig sentries who watched the weekly games would allow the "squaws" to enter the fort to retrieve the ball. One afternoon, at the third weekly game, the fort gates were opened to let a group of "squaws" in to retrieve the ball. "After all the women are weak and harmless, aren't they?" the English thought. Well, the sisters used the oppressors' sexism to their advantage. They came out of their blankets firing guns, quickly taking the fort and started the righteous peoples' bar-b-que!

Downstate, Pontiac and the people started a blockade on the two remaining forts that lasted all summer, using guerrilla warfare to stop re-enforcements from reaching the forts. In October of 1763, Pontiac and tribal leaders went to Fort Detroit to try and negotiate a just settlement of trade and trading laws.

In the course of negotiations, the chief British pig ordered Pontiac and his people arrested.

Pontiac and the people, no fools themselves, came out of their blankets "busting caps". Three or four pigs were shot and immediately disarmed. They then "borrowed" the main boar of the fort to insure their travels. Once outside the fort they left the British boar with a bullet-induced headache. Pontiac was charged with conspiracy to murder. He was never arraigned. The English did however, break the peoples blockade, and stopped the peoples spirit, by buying off tribes one by one, later. The Native Americans were forced westward by Amerikan settlers.

What caused the Native Americans, in this situation, to lose control of their lands was lack of unity. With unity we can combat racism, sexism, and all of the "pig" pushed upon our minds/bodies. With unity the people of North America can win every battle against the vampires, rats, snakes and pigs. What we call for now in 1971, is a collective show of support for all the Government inspired conspiracies against the people. Physically and financially, this means attending all the conspiracy trials to show your support. Come to our trial, attend the Bobby Seale/Ericka Huggins trial in Conn., attend the coming N.Y.C. 21, Detroit 16, Weatherman trials, the Berrigan Brothers trial. Do not allow the vampires and snakes to separate these righteous brothers and sisters from the people.

If every brother and sister in Amerika would go without that lid of dope for the week and send that money to one of these defense funds, we will surely win!

Come to the Trials!

If you want to get high, you're going to have to fight!