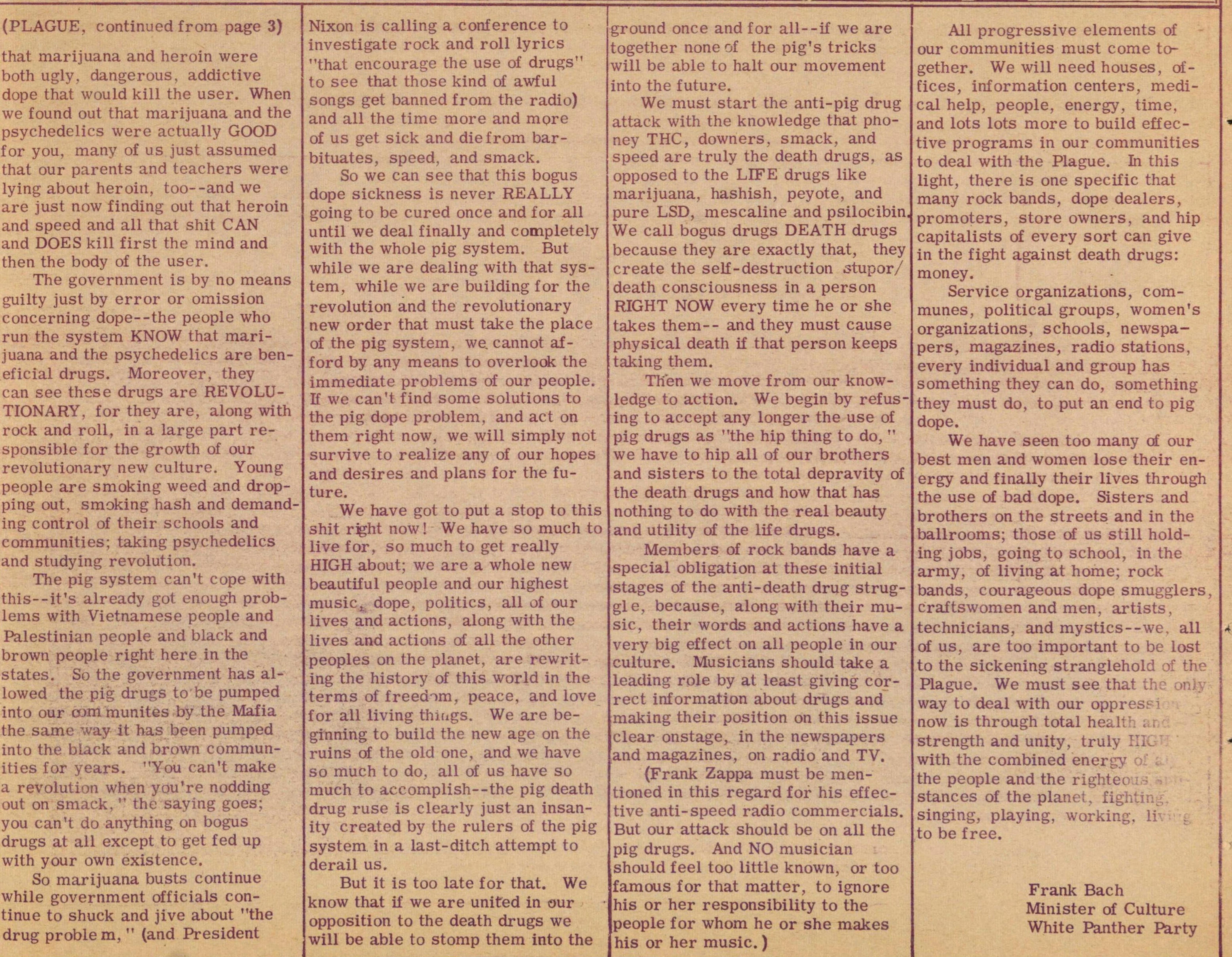 that marijuana and heroin were both ugly, dangerous, addictive dope that would kill the user. When we found out that marijuana and the psychedelics were actually GOOD for you, many of us just assumed that our parents and teachers were lying about heroin, too -- and we are just now finding out that heroin and speed and all that shit CAN and DOES kill first the mind and then the body of the user.

The government is by no means guilty just by error or omission concerning dope -- the people who run the system KNOW that marijuana and the psychedelics are beneficial drugs. Moreover, they can see these drugs are REVOLUTIONARY, for they are, along with rock and roll, in a large part responsible for the growth of our revolutionary new culture. Young people are smoking weed and dropping out, smoking hash and demanding control of their schools and communities; taking psychedelics and studying revolution.

The pig system can't cope with this -- it's already got enough problems with Vietnamese people and Palestinian people and black and brown people right here in the states. So the government has allowed the pig drugs to be pumped into our communities by the Mafia the same way it has been pumped into the black and brown communities for years. "You can't make a revolution when you 're nodding out on smack, " the saying goes; you can't do anything on bogus drugs at all except to get fed up with your own existence.

So marijuana busts continue while government officials continue to shuck and jive about "the drug problem, " (and President Nixon is calling a conference to investigate rock and roll lyrics "that encourage the use of drugs" to see that those kind of awful songs get banned from the radio) and all the time more and more of us get sick and die from barbituates, speed, and smack.

So we can see that this bogus dope sickness is never REALLY going to be cured once and for all until we deal finally and completely with the whole pig system. But while we are dealing with that system, while we are building for the revolution and the revolutionary new order that must take the place of the pig system, we cannot afford by any means to overlook the immediate problems of our people. If we can't find some solutions to the pig dope problem, and act on them right now, we will simply not survive to realize any of our hopes and desires and plans for the future.

We have got to put a stop to this shit right now! We have so much to live for, so much to get really HIGH about; we are a whole new beautiful people and our highest music, dope, politics, all of our lives and actions, along with the lives and actions of all the other peoples on the planet, are rewriting the history of this world in the terms of freedom, peace, and love for all living things. We are beginning to build the new age on the ruins of the old one, and we have so much to do, all of us have so much to accomplish--the pig death drug ruse is clearly just an insanity created by the rulers of the pig system in a last-ditch attempt to derail us.

But it is too late for that. We know that if we are united in our opposition to the death drugs we will be able to stomp them into the ground once and for all--if we are together none of the pig's tricks will be able to halt our movement into the future.

We must start the anti-pig drug attack with the knowledge that phoney THC, downers, smack, and speed are truly the death drugs, as opposed to the LIFE drugs like marijuana, hashish, peyote, and pure LSD, mescaline and psilocibin. We call bogus drugs DEATH drugs because they are exactly that, they create the self-destruction stupor/death consciousness in a person RIGHT NOW every time he or she takes them -- and they must cause physical death if that person keeps taking them.

Then we move from our knowledge to action. We begin by refusing to accept any longer the use of pig drugs as "the hip thing to do," we have to hip all of our brothers and sisters to the total depravity of the death drugs and how that has nothing to do with the real beauty and utility of the life drugs.

Members of rock bands have a special obligation at these initial stages of the anti-death drug struggle, because, along with their music, their words and actions have a very big effect on all people in our culture. Musicians should take a leading role by at least giving correct information about drugs and making their position on this issue clear onstage, in the newspapers and magazines, on radio and TV.

(Frank Zappa must be mentioned in this regard for his effective anti-speed radio commercials. But our attack should be on all the pig drugs. And NO musician should feel too little known, or too famous for that matter, to ignore his or her responsibility to the people for whom he or she makes his or her music. )

All progressive elements of our communities must come together. We will need houses, offices, information centers, medical help, people, energy, time, and lots lots more to build effective programs in our communities to deal with the Plague. In this light, there is one specific that many rock bands, dope dealers, promoters, store owners, and hip capitalists of every sort can give in the fight against death drugs: money.

We have seen too many of our best men and women lose their energy and finally their lives through the use of bad dope. Sisters and brothers on the streets and in the ballrooms; those of us still holding jobs, going to school, in the army, of living at home; rock bands, courageous dope smugglers, craftswomen and men, artists, technicians, and mystics--we, all of us, are too important to be lost to the sickening stranglehold of the Plague. We must see that the way to deal with our oppression now is through total health and strength and unity, truly HIGH with the combined energy of all the people and the righteous substances of the planet, fighting, singing, playing, working, living to be free.