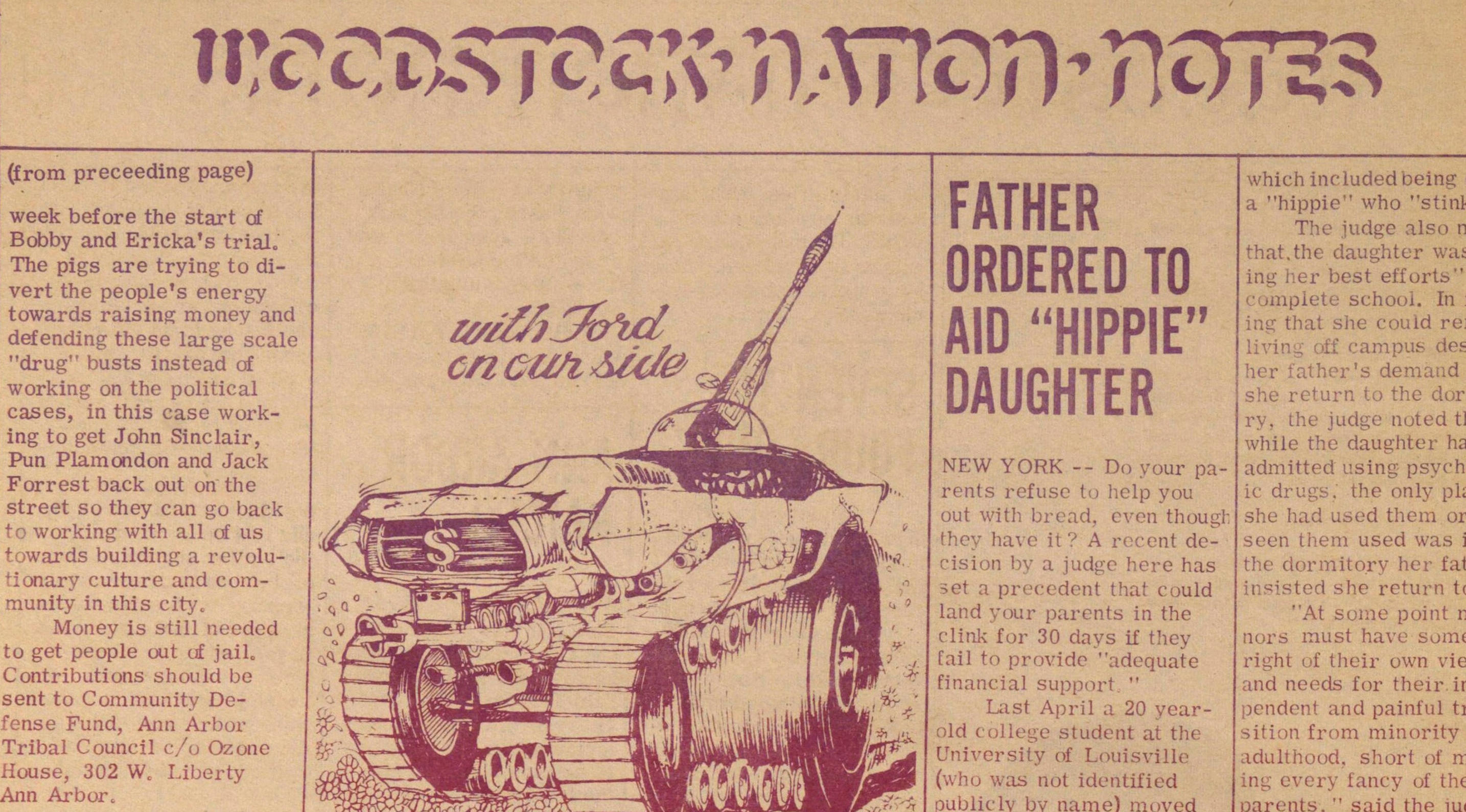 ANN ARBOR MICHlGAN - Police in this "All Amerikan City" staged a comprehensive and well-planned raid Tuesday night, Jan. 19 on several communes, including the headquarters of the Ann Arbor Argus, the local underground paper. So far (there may be more raids scheduled) 16 people have been busted for either sale or possession of marijuana and LSD or both. Bails are averaging around $7500, going as high as $15000.

Warrants were made out on the basis of information supplied by an undercover narc named Terry Breney. They came just in the midst of a debate within the City Council on whether or not to make possession of grass a misdemeanor, a measure which, it seemed till now, probably would pass. These raids are clearly an effort at political pressure by Police Chief Krasny against the City Council and the Mayor. A report in the Ann Arbor News claimed that a bag of heroin (it was in reality organic sea salt) was found at the Argus commune, which has continually fought smack in the community and in fact has received threats from the local mafia because of these efforts. Krasny is trying to show that people who smoke grass also shoot scag in an effort at sensationalization in the hope of putting pressure on the City Council not to let up on his sworn enemy, the street-freek community.

At the Argus house pigs handcuffed everybody and took them all down to the station only to release all but one two hours afterwards. Two brothers were stripped of their hair while in jail, which is illegal. Upon returning to the house people found everything turned upside down, drawers and containers spilled out. Missing was cash and checks, all the financial records, subscription files, several guns, a typewriter, address books, and other personal shit. Pigs claimed that people came in off the street and ripped the stuff off. Film of the bust was confiscated from a Michigan Daily photographer.

The raids, which affected people identified by police as "White Panthers," come at the beginning of the CIA Conspiracy Trial, in which three leaders of the party are being framed for conspiracy to bomb the secret ClA office in AA. They are similar to drug raids which went down recently in Kent Ohio just before the indictment against the 25 students and professors for demonstrations last May, and to the street sweeps and arrests in New Haven (125 people) that hit the (continued on next page)

(from preceding page) week before the start of Bobby and Ericka's trial.  The pigs are trying to divert the people's energy towards raising money and defending these large scale "drug" busts instead of working on the political cases, in this case working to get John Sinclair, Pun Plamondon and Jack Forrest back out on the street so they can go back to working with all of us towards building a revolutionary culture and community in this city.