Will The Real Musk-ogee Please Stand Up? 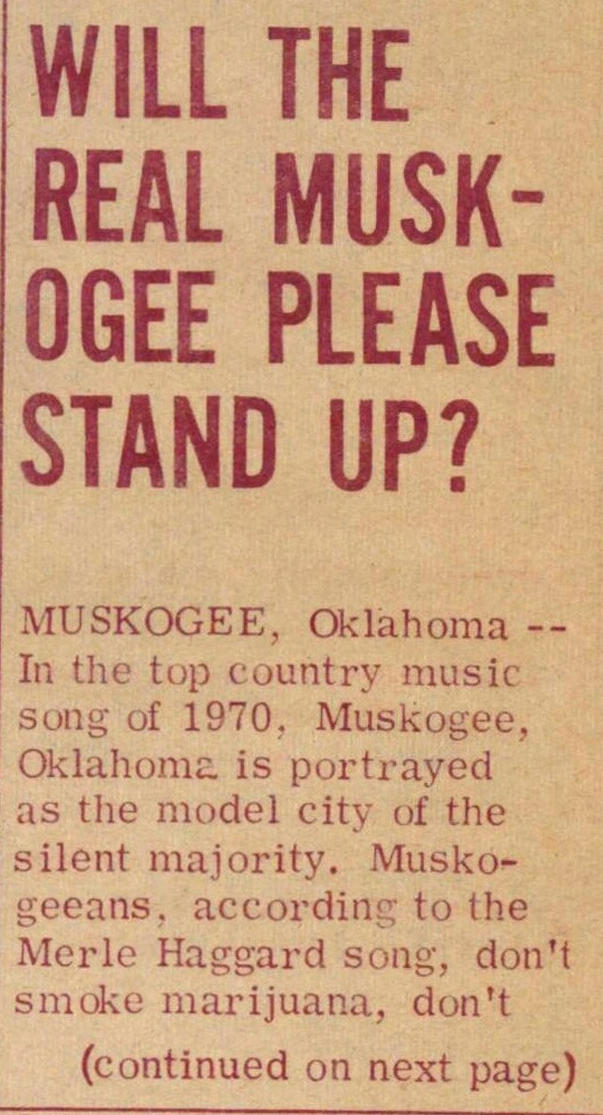 WILL THE REAL MUSKOGEE PLEASE STAND UP?

MUSKOGEE. Oklahoma -- In the top country music song of 1970, Muskogee, Oklahoma is portrayed as the model city of the silent majority. Muskogeeans, according to the Merle Haggard song, don't smoke marijuana, don't (continued on next page)

(from preceding page) take trips on LSD, don't wear sandals, beads, or long hair, and "white lightning's still the biggest thrill of all."

Haggard recently gave a concert here, and 10 percent of the town's 37,000 residents turned out to whoop it up. The immense cheers for two performances of "Okie" appeared a bit forced. No wonder. Muskogee is no model city; its pig department is going crazy and is on the verge of collapse.

While Haggard was singing the city police -- those who haven't been dismissed or suspended - were standing guard at the homes and businesses of City Councilmen and other officials. State troopers are patrolling the city, taking the place of the local police. And a group of angry police wives were demanding the ouster of the police chief.

All this has been building up for some time. A new police chief, George Kennedy, was hired last year. Two previous ones had quit. One after his automobile was bombed and one after his home was fired into. So far, Chief Kennedy has dismissed nine men. This prompted the policemen's wives to picket City Hall, demanding Kennedy's ouster and asking for an investigation of the city administration.

The City Council promised an investigation but postponed it four times.

On Dec. 10, Chief Kennedy announced that he had been informed of a plot "by underworld elements" and city policemen to burn the music store of City Councilman Frank Brock.

Brock's store burned to the ground the morning of Jan. 3. Fire Chief John Stevens said it was arson. The fire was seen spreading through the building at 4:20 A.M., and a police car was seen leaving the scene five minutes earlier. Soon afterwards other Council members reported receiving threats.

Something weird is sure going on. Seems like it's tough, being an Okie. Maybe they just need some dope.