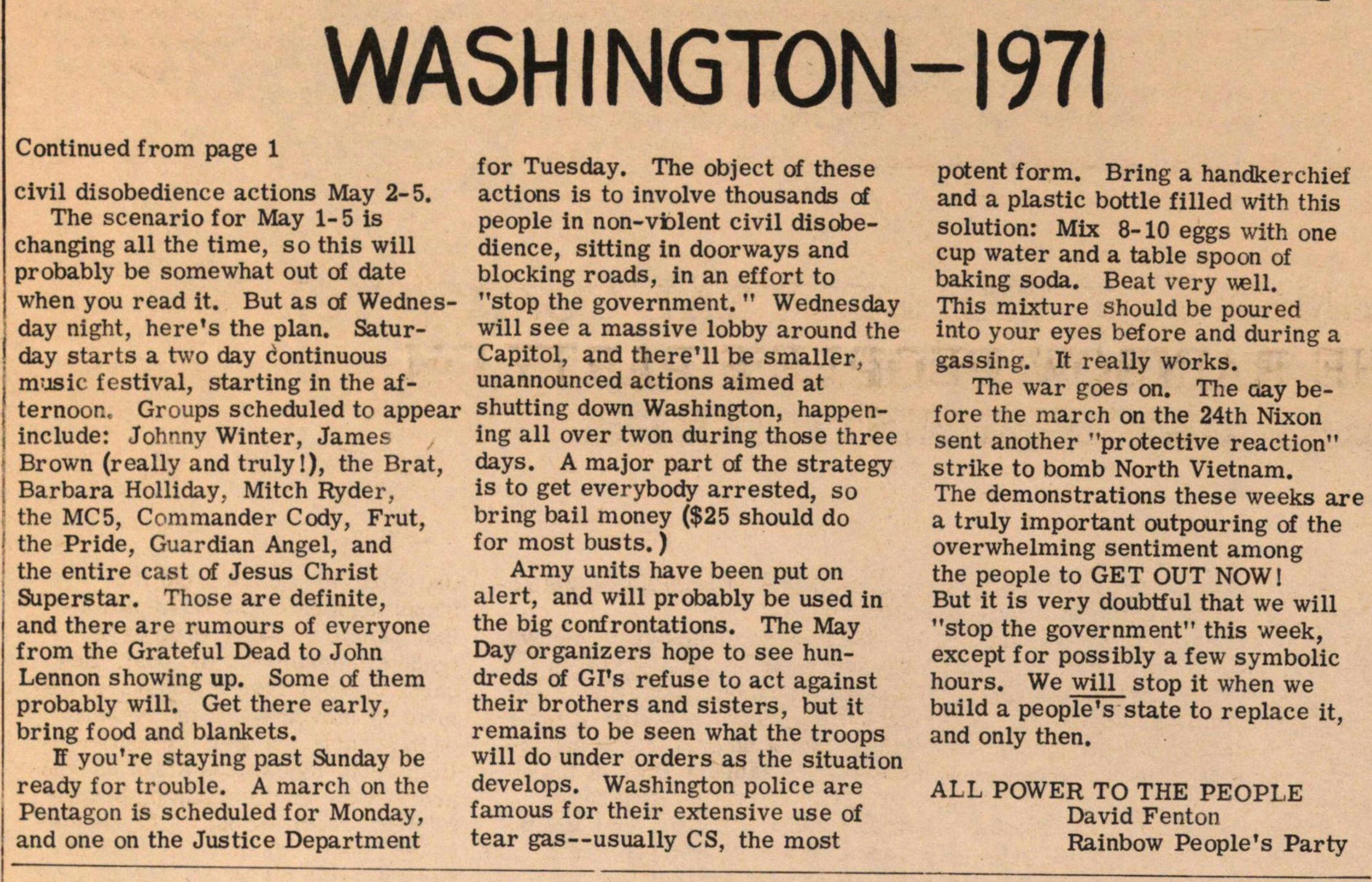 There sure were a lot of people in Washington on April 24. Estimates vary, but it's probably safe to say there were at least a half million. The line march never seemed to stop coming. People massed on both sides of the Capitol, listening to mostly boring speeches, taking in a really far-out day. Occasionally you'd come across the smell of reefer drifting among government buildings.

Going down in the car was a gas. Freeks where everywhere. Every turnpike exit was crowded with hitchhikers, and Howard Johnsons throughout the area were temporarily liberated, full of our people. People were packed into cars - one group of 40 crowded into a rented panel truck with no windows.

Everybody marched. The Vietnam Veterans, who had truly opened the nation's eyes the week before, were a strong presence, running up and down the line of march doing guerilla theatre, shooting at each other and having a good time. There were gays, women, little kids, parents, labor leaders, soldiers, -- a true cross section, revealing the widereaching opposition to the war that now exists among all kinds of Americans. People waved peace signs in the air and sang Give Peace a Chance with Peter, Paul and Mary, just like they did on November 15, 1969. And these days John Lennon, who wrote that song is singing Power to the People! Which is the solution.

The rally broke up at around 5, and people drifted back to their buses or over to the Washington Monument Grounds for a scheduled concert that evening, put on by the May Day Tribe. Around this time the only incident with the police took place--a car with some police in and around it cruised through the edge of the crowd, and was met with a shower of rocks and bottles. Very few people did the throwing, and they were quickly stopped by the majority of the crowd. Good thing, too. If the police had sent teargas into the middle of that the whole crowd gathered for the music would have been involved.

The music that night ranged from Phil Ochs, Pete Seeger to Charles Mingus to Ann Arbor's Brat and Barbara Holliday. There were maybe 60,000 people huddled in the cold, passing joints and wine and food. Two groups--the Brat (who played to the sunrise) and Redbone--got the audience really shaking. The sound, done by Hanley was loud and clear. (They'll be using the same sound system on May 1.) When the music died down there was the loud buzzing sound of the crowd – which produced the usua. number of bad trips, handled by the medical tent at the rear.

The sets ended Sunday morning around 8. Some people went home, some stayed put, and some marched in a group to West Potomac Park, where the May Day Tribe has a permit to organize a campsite/city. Plans are to camp several thousand people there, with organized food, medical and child-care services, using a geographical breakdown of the people there to group for the

The scenario for May 1-5 is changing all the time, so this will probably be somewhat out of date when you read it. But as of Wednesday night, here's the plan. Saturday starts a two day continuous music festival, starting in the afternoon. Groups scheduled to appear include: Johnny Winter, James Brown (really and truly!), the Brat, Barbara Holliday. Mitch Ryder, the MC5, Commander Cody, Frut, the Pride, Guardian Angel, and the entire cast of Jesus Christ Superstar. Those are definite, and there are rumours of everyone from the Grateful Dead to John Lennon showing up. Some of them probably will. Get there early, bring food and blankets.

If you 're staying past Sunday be ready for trouble. A march on the Pentagon is scheduled for Monday, and one on the Justice Department for Tuesday. The object of these actions is to involve thousands of people in non-violent civil disobedience, sitting in doorways and blocking roads, in an effort to "stop the government. " Wednesday will see a massive lobby around the Capitol, and there'll be smaller, unannounced actions aimed at shutting down Washington, happening all over twon during those three days. A major part of the strategy is to get everybody arrested, so bring bail money ($25 should do for most busts.)

Army units have been put on alert, and will probably be used in the big confrontations. The May Day organizers hope to see hundreds of GI's refuse to act against their brothers and sisters, but it remains to be seen what the troops will do under orders as the situation develops. Washington police are famous for their extensive use of tear gas--usually CS, the most potent form. Bring a handkerchief and a plastic bottle filled with this solution: Mix 8-10 eggs with one cup water and a tablespoon of baking soda. Beat very well. This mixture should be poured into your eyes before and during a gassing. It really works.

The war goes on. The day before the march on the 24th Nixon sent another "protective reaction" strike to bomb North Vietnam. The demonstrations these weeks are a truly important outpouring of the overwhelming sentiment among the people to GET OUT NOW! But it is very doubtful that we will "stop the government" this week, except for possibly a few symbolic hours. We will stop it when we build a people's state to replace it, and only then.