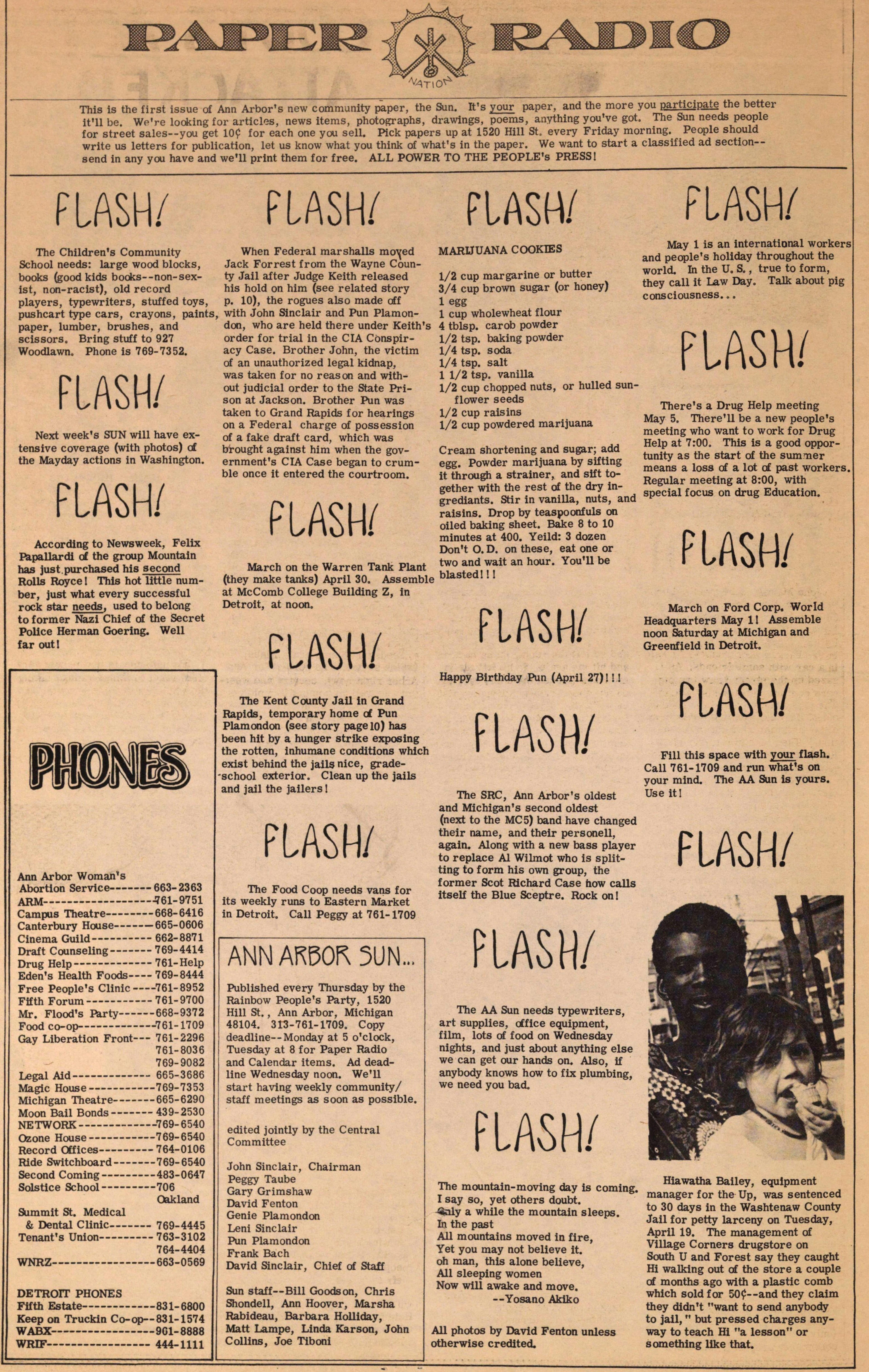 This is the first issue of Ann Arbor's new community paper, the Sun. It's Lour paper, and the more you participóte the better it'U be. We're looking for articles, news items, photographs, drawings, poems, anything you've got. The Sun needs people for street sales--you get 10? for each one you sell. Piek papers up at 1520 Hill St. every Friday morning. People should write us letters for publication, let us know what you think of what's in the paper. We want to start a classified ad section-send in any you have and we'll print them for f ree. ALL POWER TO THE PEOPLE's PRESS! F LASH The Children's Community School needs: large wood blocks, books (good kids books--non-sexist, non-racist), old record players, typewriters, stuffed toys, pushcart type cars, crayons, paints, paper, lumber, brushes, and scissors. Bring stuff to 927 Woodlawn. Phone is 769-7352. FLASH Next week's SUN will have extensive coverage (with photos) of the Mayday actions in Washington. FLASH According to Newsweek, Felix Papallardi of the group Mountain has just.purchased his second Rolls Royce I This hot little number, just what every successful rock star needs, used to belong to f ormer Nazi Chief of the Secret Pólice Herman Goering. Well f ar out! FLASH When Federal marshalls moved Jack Forrest from the Wayne County Jail after Judge Keith released his hold on him (see related story p. 10), the rogues als o made off with John Sinclair and Pun Plamondon, who are held there under Keith's order for trial in the CIA Cönspiracy Case. Brother John, the victim of an unauthorized legal kidnap, was taken for no reas on and without judicial order to the State Prison at Jackson. Brother Pun was taken to Grand Rapids for hearings on a Federal charge of possession of a fake draft card, which was brought against him when the government's CIA Case began to crumble once it entered the courtroom. FLASH March on the Warren Tank Plant (they make tanks) April 30. Assemble at McComb College Building Z, in Detroit, at noon. FLASH The Kent County Jail in Grand Rapids, temporary home of Pun Plamondon (see story page 10 ) has been hit by a hunger strike exposing the rotten, inhumane conditions which exist behind the jails nice, grade-school exterior. Clean up the jails and jail the jailers ! FLASH The Food Coop needs vans for its weekly runs to Eastern Market in Detroit. Cali Peggy at 1709 FLASH MARIJUANA COOKIES ! 12 cup margarine or butter 34 cup brown sugar (or honey) legg 1 cup wholewheat flour 4 tblsp. carob powder 12 tsp. baking powder 14 tsp. soda 14 tsp. salt 1 12 tsp. vanilla 12 cup chopped nuts, or hulled sunflower seeds 12 cup raisins 12 cup powdered marijuana Cream shortening and sugar; add egg. Powder marijuana by sifting it through a strainer, and sift together with the rest of the dry ingrediants. Stir in vanilla, nuts, and raisins. Drop by teaspoonfuls on oiled baking sheet. Bake 8 to 10 minutes at 400. Yeild: 3 dozen Don't O. D. on these, eat one or two and wait an hour. You'll be , blastedü! FLASH Happy Birthday Pun (April 27)1 1 ! FLASH The SRC, Ann Arbor's oldest and Michigan's second oldest (next to the MC 5) band have changed their name, and their personell, again. Along with a new bass player to replace Al Wilmot who is splitting to f orm his own group, the former Scot Richard Case how calis itself the Blue Sceptre. Rock on I FLASH The AA Sun needs typewriters, art supplies, office equipment, film, lots of food on Wednesday nights, and just about anything else we can get our hands on. Also, if anybody knows how to fix plumbing, we need you bad. FLASH The mountain-moving day is coming. I say so, yet others doubt. ■üy a while the mountain sleeps. In the past All mountains moved in fire, Yet you may not believe it. oh man, this alone believe, All sleeping women Now will awake and move. - Yosano Akiko All photos by David Fenton unless otherwise credited. FLASH May 1 is an international workers and people's holiday throughout the world. In the U. S. , true to form, they cali it Law Day. Talk about pig consciousness. . . FLASH There's a Drug Help meeting May 5. There'U be a new people's meeting who want to work for Drug Help at 7:00. This is a good opportunity as the start of the sumtier means a loss of a lot of past workers. Regular meeting at 8:00, with special focus on drug Education. FLASH March on Ford Corp. World Headquarters May 1 1 Assemble noon Saturday at Michigan and Greenfield in Detroit. FLASH Fill this space with your flash. Cali 761-1709 and run what's on your mind. The AA Sun is yours. Useit! FLASH Hiawatha Bailey, equipment manager f or the Up, was sentenced to 30 days in the Washtenaw County Jail for petty larceny on Tuesday, April 19. The management of Village Corners drugstore on South U and Forest say they caught Hi walking out of the store a couple of months ago with a plastic comb which soldfor -and they claim they didn't "want to send anybody to jail, " but pressed charges anyway to teach Hi "a lesson" or something lik e that. Ann Arbor Woman's Abortion Service 663-2363 ARM - -761-9751 Campus Theatre 668-6416 Canterbury House 665-0606 Cinema Guild 662-8871 Draft Counseling 769-4414 Drug Help 761-Help Eden's Health Foods 769-8444 Free People's Clinic 761-8952 Fifth Forum 761-9700 Mr. Flood's Party 668-9372 Food -761-1709 Gay Liberation Front- 761-2296 761-8036 769-9082 Legal Aid 665-3686 Magie House 769-7353 Michigan Theatre 665-6290 Moon Bail Bonds - 439-2530 NETWORK -769-6540 Ozone House 769-6540 Record Offices 764-0106 Ride Switchboard 769-6540 Second Coming 483-0647 Solstice School 706 Qakland Summit St. Medical & Dental Clinic 769-4445 Tenant's Union-- 763-3102 764-4404 WNRZ 663-0569 DETROIT PHONES Fifth Estáte- -831-6800 Keep on Truckin op- 831-1574 901-8888 WRIF 444-1111