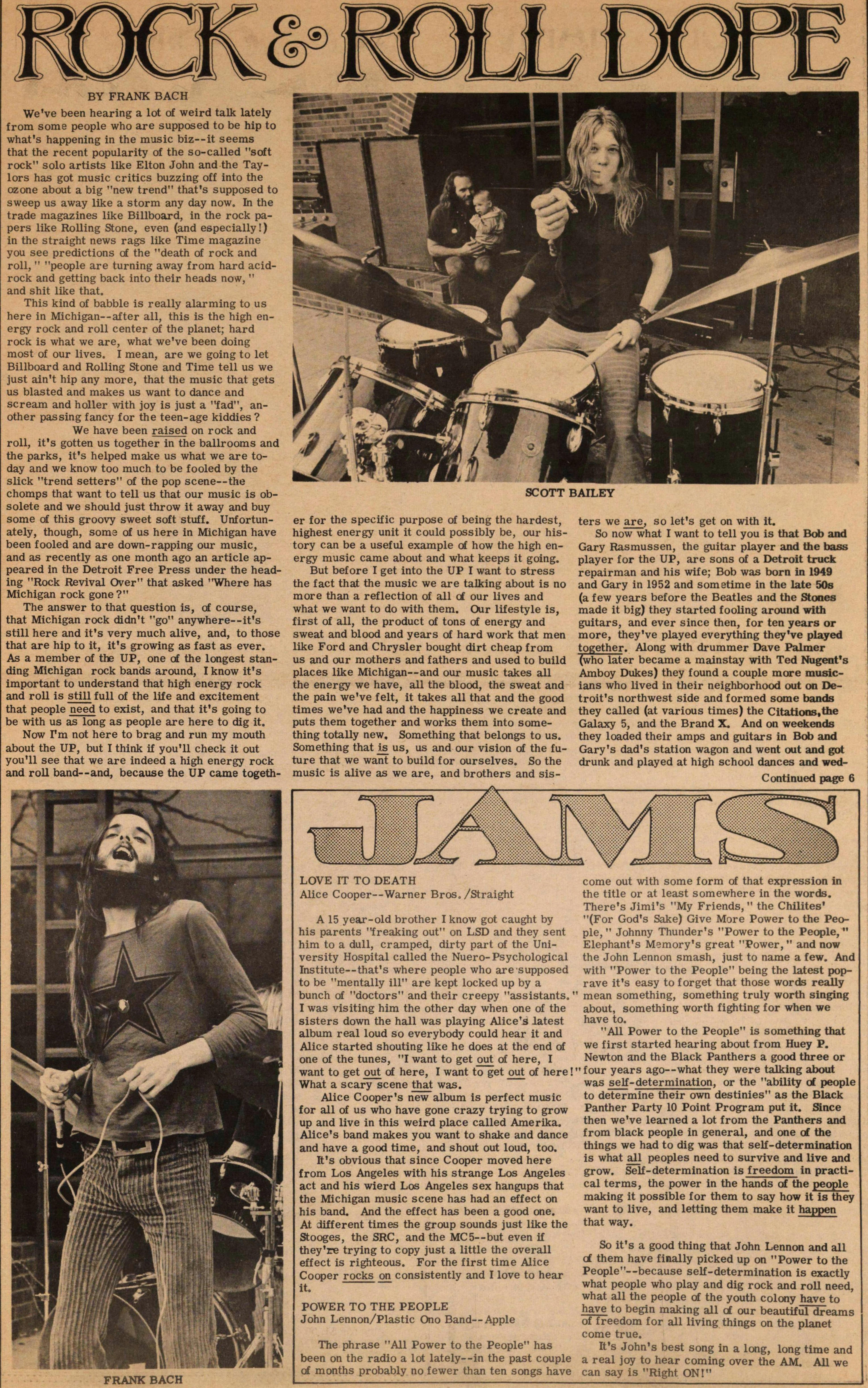 We 've been hearing a lot of weird talk lately f rom some people who are supposed to be hip to what's happening in the music biz - it seems that the recent popularity of the so-called "soft rock" solo artists like Elton John and the Taylors has got music critics buzzing off into the ozone about a big "new trend" that's supposed to sweep us away like a storm any day now. In the trade magazines like Billboard, in the rock papers like Rolling Stone, even (and especially!) in the straight news rags like Time magazine you see predictions cf the "death of rock and roll, " "people are turning away from hard acidrock and getting back into their heads now, " and shit like that. This kind of babble is really alarming to us here in Michigan - after all, this is the high energy rock and roll center of the planet; hard rock is what we are, what we've been doing most of our lives. I mean, are we going to let Billboard and Rolling Stone and Time teil us we just ain't hip any more, that the music that gets us blasted and makes us want to dance and scream and holler with joy is just a "fad", another passing fancy for the teen-age kiddies ? We have been raised on rock and roll, it's gotten us together in the ballrooms and the parks, it's helped make us what we are today and we know too much to be fooled by the slick "trend setters" of the pop scène - the chomps that want to teil us that our music is obsolete and we should just throw it away and buy some of this groovy sweet soft stuff. Unfortunately, though, soms of us here in Michigan have been fooled and are rapping our music, and as recently as one month ago an article appeared in the Detroit Free Press under the heading "Rock Revival Over" that asked "Where has Michigan rock gone?" The answer to that question is, cf course, that Michigan rock didn't "go" anywhere - it's still here and it's very much alive, and, to those that are hip to it, it's growing as fast as ever. As a member of the UP, one of the longest standing Michigan rock bands around, I know it's important to understand that high energy rock and roll is still f uil of the life and excitement that people need to exist, and that it's going to be with us as long as people are here to dig it. Now Fm not here to brag and run my mouth about the UP, but I think if you'll check it out you'll see that we are indeed a high energy rock and roll -and, because the UP came er for the speeific purpose of being the hardest, highest energy unit it could possibly be, our history can be a useful example of how the high energy music came about and what keeps it going. But bef ore I get into the UP I want to stress the f act that the music we are talking about is no more than a reflection of all ei our lives and what we want to do with them. Our lifestyle is, first of all, the product of tons of energy and sweat and blood and years of hard work that men like Ford and Chrysler bought dirt cheap f rom us and our mothers and fathers and used to build places like Michigan- and our music takes all the energy we have, all the blood, the sweat and the pain we've feit, it takes all that and the good times we've had and the happiness we créate and puts them together and works them into something totally new, Something that belongs to us. Something that s us, us and our visión of the future that we want to build for ourselves. So the music is alive as we are, and brothers and ters we are, so let's get on with it. So now what I want to teil you is that Bob and Gary Rasmussen, the guitar player and the bass player for the UP, are sons of a Detroit truck repairman and his wif e; Bob was bom in 1949 and Gary in 1952 and sometime in the late 50s (a few years bef ore the Beatles and the Stones made it big) they started f ooling around with guitars, and ever since then, for ten years or more, they've played everything they've played together. Along with drummer Dave Palmer (who later became a mainstay with Ted Nugent's Amboy Dukes) they found a couple mare musicians who lived in their neighborhood out on Detroit's northwest side and f ormed some bands they called (at various times) the 011311008,1116 Galaxy 5, and the Brand X. And on weekends they loaded their amps and guitars in Bob and Gary's dad's station wagon and went out and got drunk and played at high school dances and wedContinued page 6