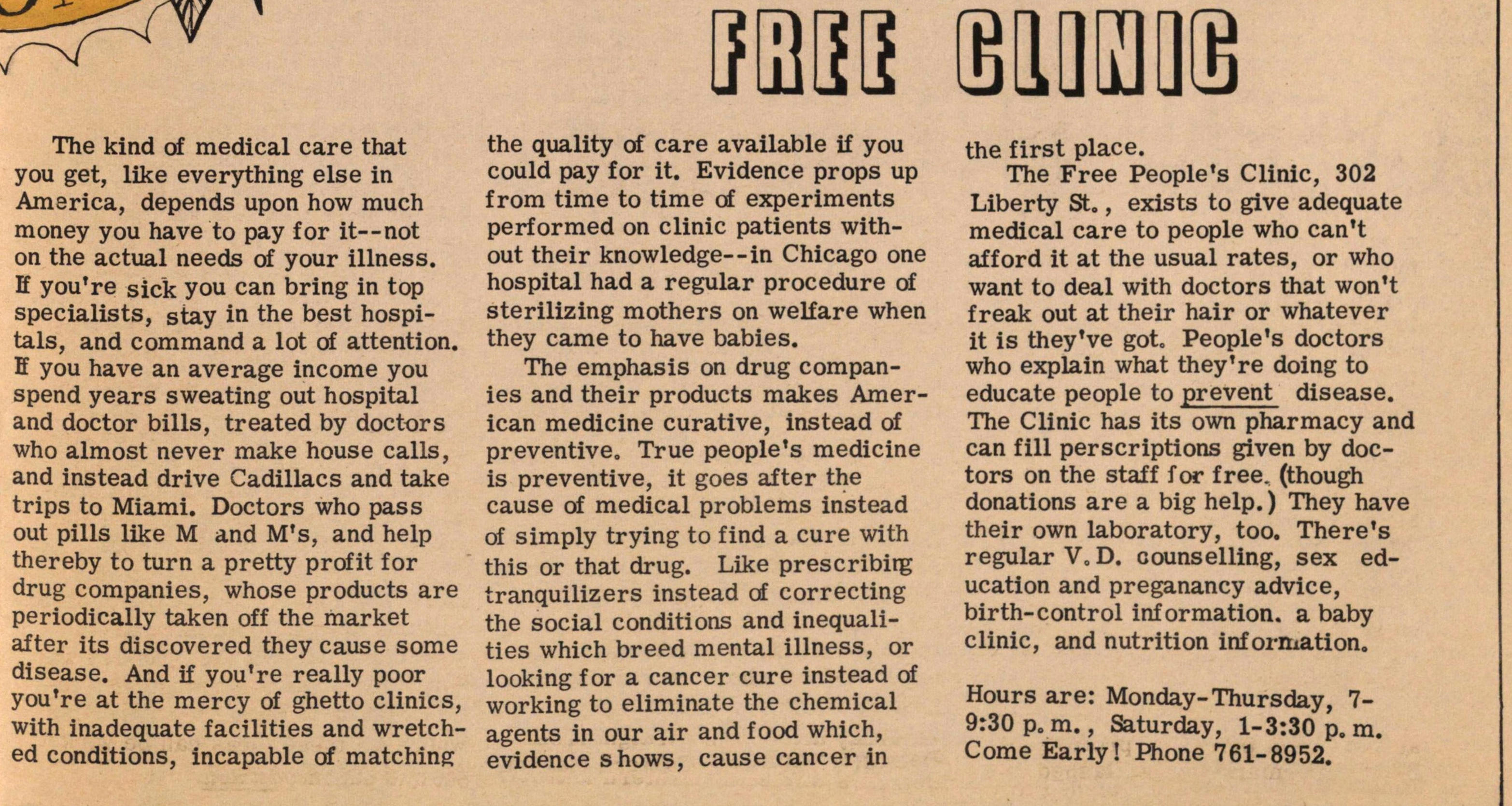 The kind of medical care that you get, like everything else in America, depends upon how much money you have to pay f or it - not on the actual needs of your illness. K you' re sick you can bring in top specialists, stay in the best hospitals, and command a lot of attention. ff you have an average income you spend years sweating out hospital and doctor bilis, treated by doctors who almost never make house calis, and instead drive Cadillacs and take trips to Miami. Doctors who pass out pills like M and Mfs, and help thereby to turn a pretty profit for drug companies, whose producís are periodically taken off the market after its discovered they cause some disease. And if you're really poor you're at the mercy of ghetto clinics, with inadequate facilities and wretched conditions, incapable of matching the quality of care available if you could pay for it. Evidence props up from time to time of experiments performed on clinic patients without their knowledge - in Chicago one hospital had a regular procedure of sterilizing mothers on welfare when they came to have babies. The emphasis on drug companies and their products makes American medicine curative, instead of preventive. True people's medicine is preventive, it goes after the cause of medical problems instead of simply trying to find a cure with this or that drug. Like prescribir tranquilizers instead of correcting the social conditions and inequalities which breed mental illness, or looking for a cáncer cure instead of working to eliminate the chemical agents in our air and f ood which, evidence shows, cause cáncer in the first place. The Free People's Clinic, 302 Liberty St. , exists to give adequate medical care to people who can't afford it at the usual rates, or who want to deal with doctors that won't freak out at their hair or whatever it is they've got„ People's doctors who explain what they're doing to edúcate people to prevent disease. The Clinic has its own pharmacy and can fill perscriptions given by doctors on the staff f or free. (though donations are a big help. ) They have their own laboratory, too. There's regular V.D. counselling, sex education and preganancy advice, control inf ormation. a baby clinic, and nutrition inf ormation. Hours are: Monday-Thursday, 79:30 p. m. , Saturday, 1-3:30 p. m. Come Early! Phone 761-8952.