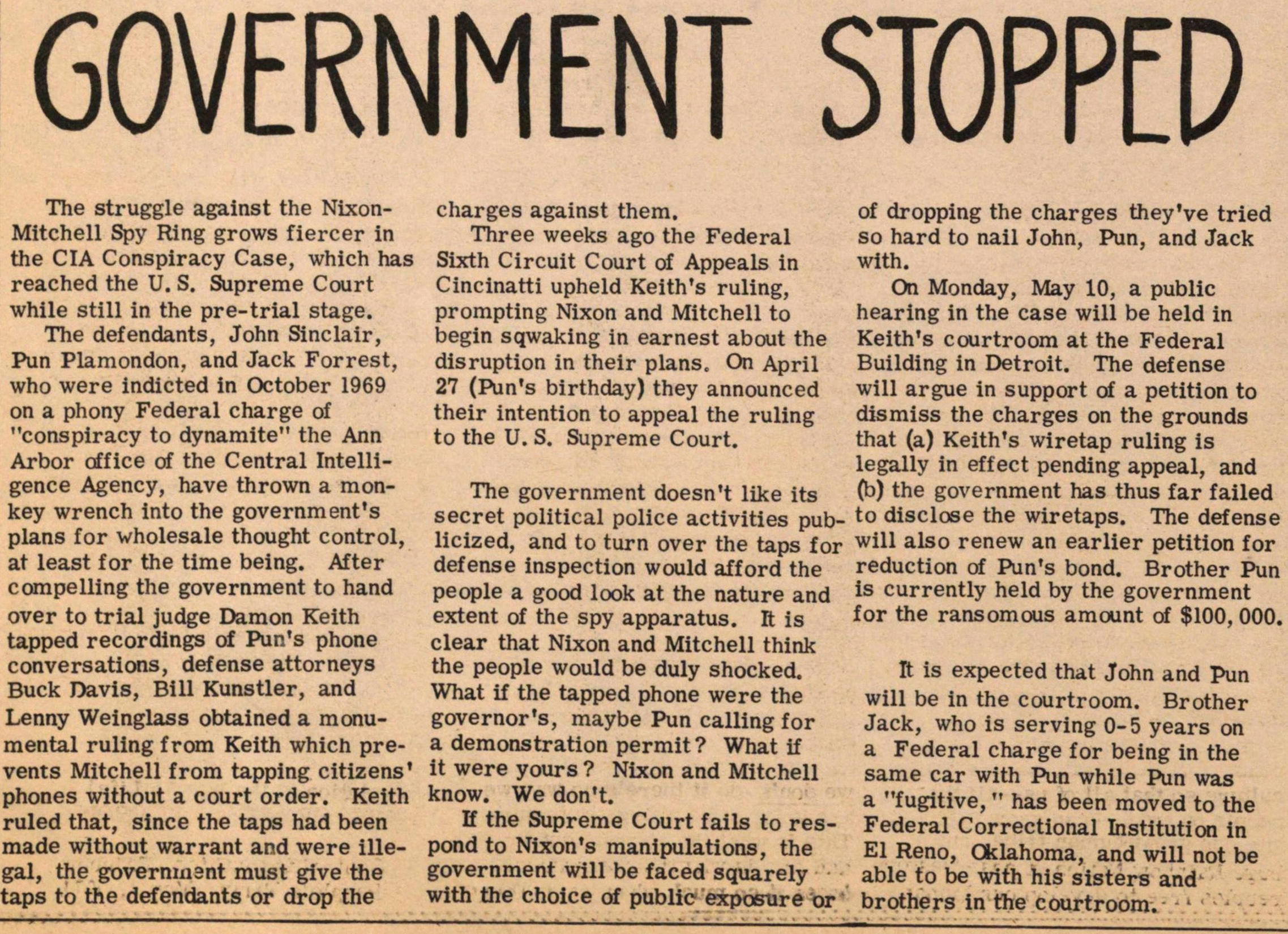 The struggle against the NixonMitchell Spy Ring grows fiercer in the CIA Conspiracy Case, which has reached the U. S. Supreme Court while still in the pre-trial stage. The defendants, John Sinclair, Pun Plamondon, and Jack Forrest, who were indicted in October 1969 on a phony Federal charge of "conspiracy to dynamite" the Ann Arbor office of the Central Intelligence Agency, have thrown a monkey wrench into the government's plans for Wholesale thought control, at least for the time being. After compelling the government to hand over to trial judge Damon Keith tapped recordings of Pun's phone conversations, defense attorneys Buck Davis, Bill Kunstier, and Lenny Weinglass obtained a monumental ruling f rom Keith which prevents Mitchell f rom tapping citizens' phones without a court order. Keith ruled that, since the taps had been made without warrant and were illegal, the governmant must give the taps to the defendants or drop the charges against them. Three weeks ago the Federal Sixth Circuit Court of Appeals in Cincinatti upheld Keith's ruling, prompting Nixon and Mitchell to begin sqwaking in earnest about the disruption in their plans. On April 27 (Pun's birthday) they announced their intention to appeal the ruling to the U. S. Supreme Court. The gover nment doesn't like its secret political pólice activities publicized, and to turn over the taps for defense inspection would afford the people a good look at the nature and extent of the spy apparatus. It is clear that Nixon and Mitchell think the people would be duly shocked. What if the tapped phone were the governor's, maybe Pun calling for a demonstration permit ? What if it were yours ? Nixon and Mitchell know. We don't. H the Supreme Court fails to respond to Nixon's manipulations, the government will be faced squarely with the choice of public exposure or of dropping the charges they've tried so hard to nail John, Pun, and Jack with. On Monday, May 10, a public hearing in the case will be held in Keith's courtroom at the Federal Building in Detroit. The defense will argue in support of a petition to dismiss the charges on the grounds that (a) Keith's wiretap ruling is legally in effect pending appeal, and (b) the government has thus f ar failed to disclose the wiretaps. The defense will also renew an earlier petition for reduction of Pun's bond. Brother Pun is currently held by the government for the ransomous amount of $100, 000. It is expected that John and Pun will be in the courtroom. Brother Jack, who is serving 0-5 years on a Federal charge for being in the same car with Pun while Pun was a "fugitive, " has been moved to the Federal Correctional Institution in El Reno, Oklahoma, and will not be able to be with his sisters and' brothers in the courtroom. '.'.'