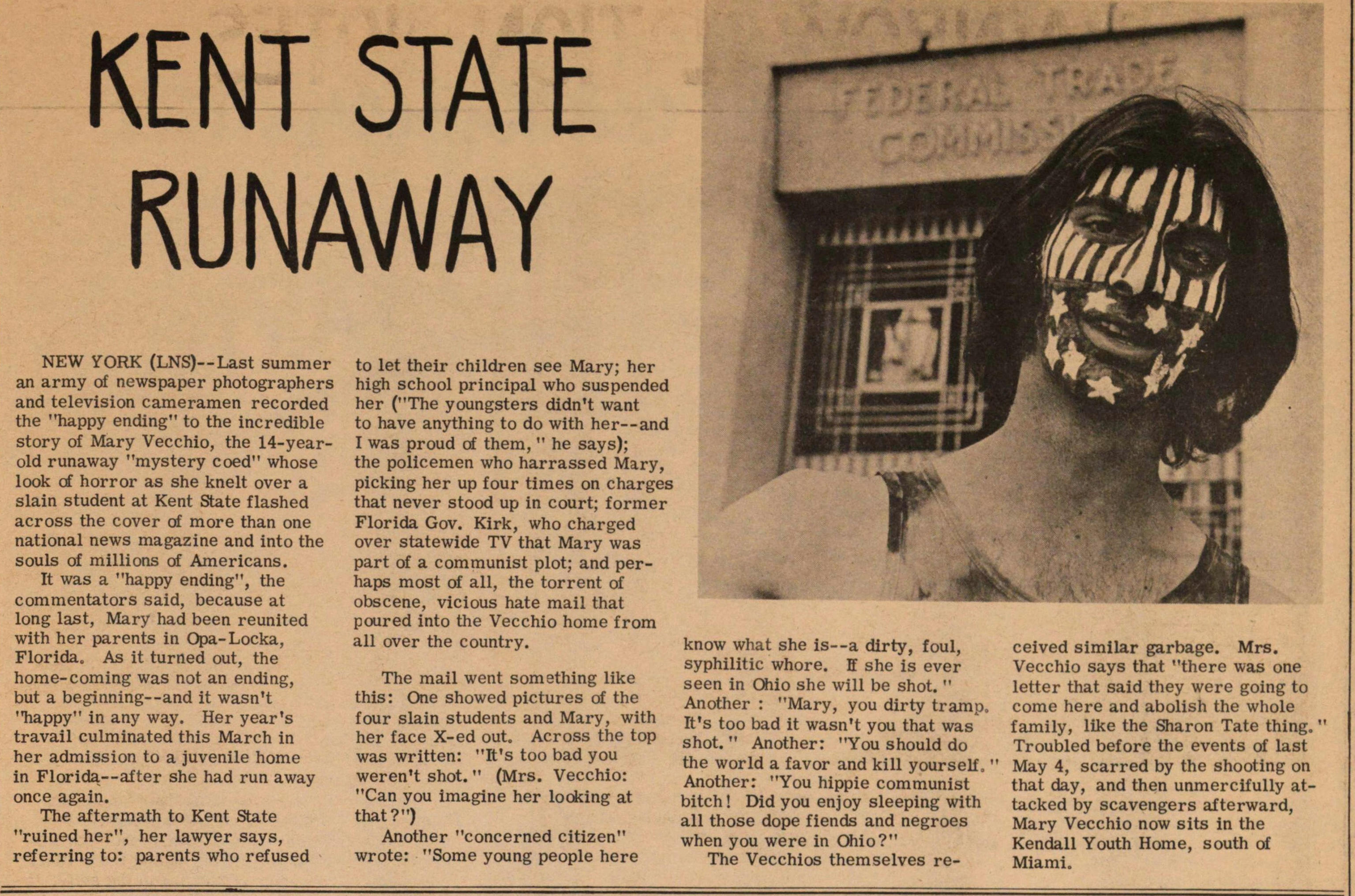 NEW YORK (LNS)- Last summer an army of newspaper photographers and television cameramen recorded the "happy ending" to the incredible story of Mary Vecchio, the 14-year-old runaway "mystery coed" whose look of horror as she knelt over a slain student at Kent State flashed across the cover of more than one national news magazine and into the souls of millions of Americans.

It was a "happy ending", the commentators said, because at long last, Mary had been reunited with her parents in Opa-Locka, Florida. As it turned out, the coming was not an ending, but a beginning - and it wasn't "happy" in any way. Her year's travail culminated this March in her admission to a juvenile home in Florida - after she had run away once again.

The aftermath to Kent State "ruined her", her lawyer says, referring to: parents who refused to let their children see Mary; her high school principal who suspended her ("The youngsters didn't want to have anything to do with her - and I was proud of them, " he says); the policemen who harassed Mary, picking her up four times on charges that never stood up in court; former Florida Gov. Kirk, who charged over statewide TV that Mary was part of a communist plot; and perhaps most of all, the torrent of obscene, vicious hate mail that poured into the Vecchio home from all over the country.

The mail went something like this: One showed pictures of the four slain students and Mary, with her face X-ed out. Across the top was written: "It's too bad you weren't shot." (Mrs. Vecchio: "Can you imagine her looking at that?")

Another "concerned citizen" wrote: "Some young people here know what she is--a dirty, foul, syphilitic whore. If she is ever seen in Ohio she will be shot. " Another : "Mary, you dirty tramp. It's too bad it wasn't you that was shot. " Another: "You should do the world a favor and kill yourself ." Another: "You hippie communist bitch! Did you enjoy sleeping with all those dope fiends and negroes when you were in Ohio?"

The Vecchios themselves received similar garbage. Mrs. Vecchio says that "there was one letter that said they were going to come here and abolish the whole family, like the Sharon Tate thing." Troubled before the events of last May 4, scarred by the shooting on that day, and then unmercifully attacked by scavengers afterward, Mary Vecchio now sits in the Kendall Youth Home, south of Miami.