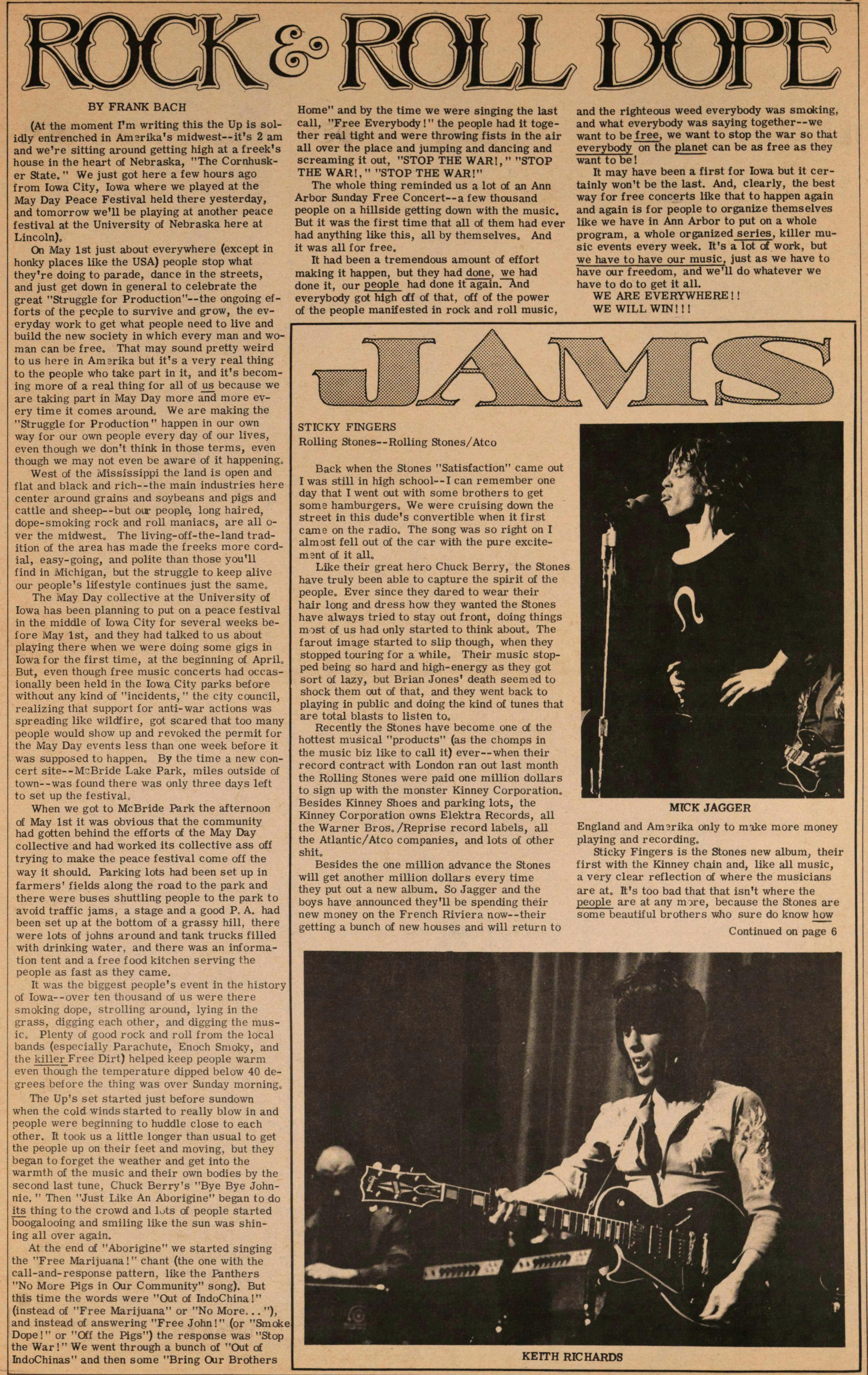 (At the moment I'm writing this the Up is solidly entrenched in Amerika's midwest - it's 2 am and we're sitting around getting high at a freek's house in the heart of Nebraska, "The Cornhusker State." We just got here a few hours ago from Iowa City, Iowa where we played at the May Day Peace Festival held there yesterday, and tomorrow we'll be playing at another peace festival at the University of Nebraska here at Lincoln).

On May 1st just about everywhere (except in honky places like the USA) people stop what they're doing to parade, dance in the streets, and just get down in general to celebrate the great "Struggle for Production" - the ongoing efforts of the people to survive and grow, the everyday work to get what people need to live and build the new society in which every man and woman can be free. That may sound pretty weird to us here in Amerika but it's a very real thing to the people who take part in it, and it's becoming more of a real thing for all of us because we are taking part in May Day more and more every time it comes around. We are making the "Struggle for Production" happen in our own way for our own people every day of our lives, even though we don't think in those terms, even though we may not even be aware of it happening.

West of the Mississippi the land is open and flat and black and rich - the main industries here center around grains and soybeans and pigs and cattle and sheep - but our people, long haired, dope-smoking rock and roll maniacs, are all over the midwest. The living-off-the-land tradition of the area has made the freeks more cordial, easy-going, and polite than those you'll find in Michigan, but the struggle to keep alive our people's lifestyle continues just the same.

The May Day collective at the University of Iowa has been planning to put on a peace festival in the middle of Iowa City for several weeks before May 1st, and they had talked to us about playing there when we were doing some gigs in Iowa for the first time, at the beginning of April. But, even though free music concerts had occasionally been held in the Iowa City parks before without any kind of "incidents," the city council, realizing that support for war actions was spreading like wildfire, got scared that too many people would show up and revoked the permit for the May Day events less than one week before it was supposed to happen. By the time a new concert site - McBride Lake Park, miles outside of town - was found there was only three days left to set up the festival.

When we got to McBride Park the afternoon of May 1st, it was obvious that the community had gotten behind the efforts of the May Day collective and had worked it's collective ass off trying to make the peace festival come off the way it should. Parking lots had been set up in farmers' fields along the road to the park and there were buses shuttling people to the park to avoid traffic jams. A stage and a good P. A. had been set up at the bottom of a grassy hill, there were lots of johns around and tank trucks filled with drinking water, and there was an information tent and a free food kitchen serving the people as fast as they came.

It was the biggest people's event in the history of Iowa - over ten thousand of us were there smoking dope, strolling around, lying in the grass, digging each other, and digging the music. Plenty of good rock and roll from the local bands (especially Parachute, Enoch Smoky, and the killer Free Dirt) helped keep people warm even though the temperature dipped below 40 degrees before the thing was over Sunday morning.

The Up's set started just before sundown when the cold winds started to really blow in and people were beginning to huddle close to each other. It took us a little longer than usual to get the people up on their feet and moving, but they began to forget the weather and get into the warmth of the music and their own bodies by the second last tune, Chuck Berry's "Bye Bye Johnnie. " Then "Just Like An Aborigine" began to do its thing to the crowd and lots of people started boogalooing and smiling like the sun was shining all over again.

At the end of "Aborigine" we started singing the "Free Marijuana!" chant (the one with the response pattern, like the Panthers "No More Pigs in Our Community" song). But this time the words were "Out of IndoChina!" (instead of "Free Marijuana" or "No More. . . "), and instead of answering "Free John!" (or "Smoke Dope!" or "Off the Pigs") the response was "Stop the War!" We went through a bunch of "Out of IndoChinas" and then some "Bring Our Brothers Home" and by the time we were singing the last call, "Free Everybody!" the people had it together real tight and were throwing fists in the air all over the place and jumping and dancing and screaming it out, "STOP THE WAR!, " "STOP THE WAR!," "STOP THE WAR!"

The whole thing reminded us a lot of an Ann Arbor Sunday Free Concert - a few thousand people on a hillside getting down with the music. But it was the first time that all of them had ever had anything like this, all by themselves. And it was all for free.

It may have been a first for Iowa but it certainly won't be the last. And, clearly, the best way for free concerts like that to happen again and again is for people to organize themselves like we have in Ann Arbor to put on a whole program, a whole organized series, killer music events every week. It's a lot of work, but we have to have our music, just as we have to have our freedom, and we'll do whatever we have to do to get it all. WE ARE EVERYWHERE ! ! WE WILL WIN!!!