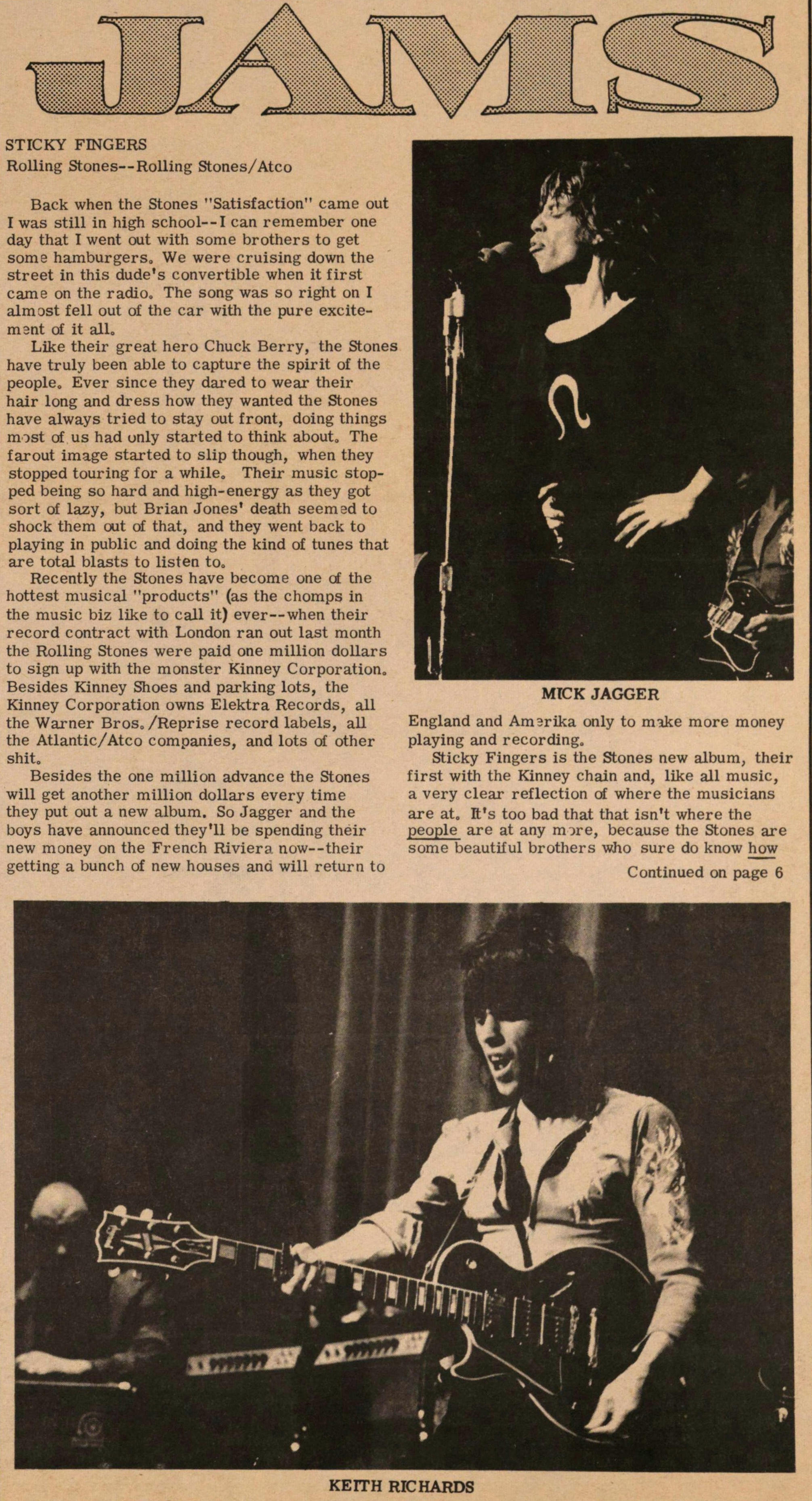 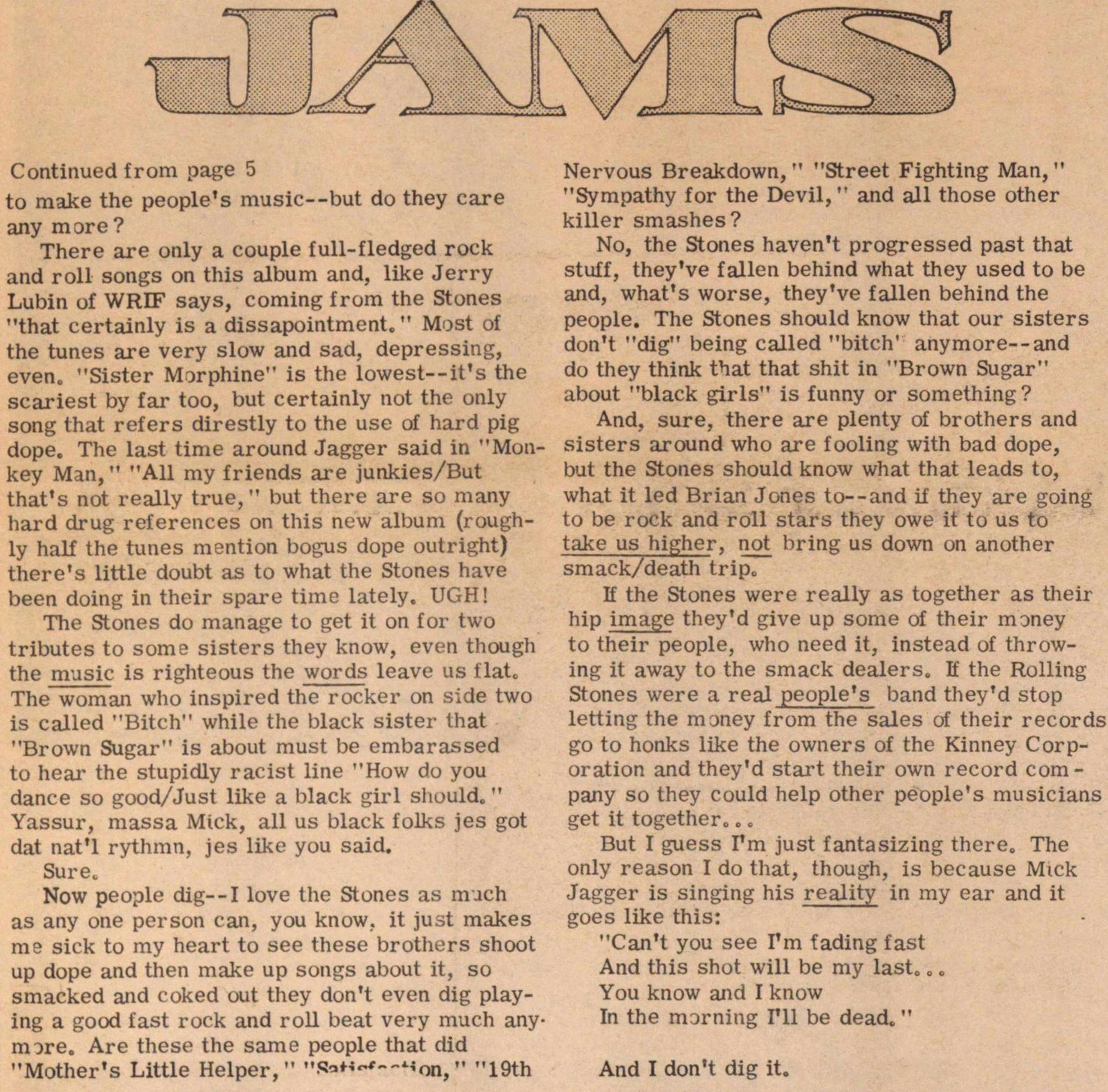 Back when the Stones "Satisfaction" came out I was still in high school -- I can remember one day that I went out with some brothers to get some hamburgers. We were cruising down the street in this dude's convertible when it first came on the radio. The song was so right on I almost fell out of the car with the pure excitement of it all.

Like their great hero Chuck Berry, the Stones have truly been able to capture the spirit of the people. Ever since they dared to wear their hair long and dress how they wanted the Stones have always tried to stay out front, doing things most of us had only started to think about„ The farout image started to slip though, when they stopped touring for a while. Their music stopped being so hard and high-energy as they got sort of lazy, but Brian Jones' death seemed to shock them out of that, and they went back to playing in public and doing the kind of tunes that are total blasts to listen to.

Recently the Stones have become one of the hottest musical "products" (as the chomps in the music biz like to call it) ever -- when their record contract with London ran out last month the Rolling Stones were paid one million dollars to sign up with the monster Kinney Corporation. Besides Kinney Shoes and parking lots, the Kinney Corporation owns Elektra Records, all the Warner Bros./Reprise record labels, all the Atlantic/Atco companies, and lots of other shit.

Besides the one million advance the Stones will get another million dollars every time they put out a new album. So Jagger and the boys have announced they'll be spending their new money on the French Riviera now -- their getting a bunch of new houses and will return to England and Amerika only to make more money playing and recording.

Sticky Fingers is the Stones new album, their first with the Kinney chain and, like all music, a very clear reflection of where the musicians are at. It's too bad that that isn't where the people are at any more, because the Stones are some beautiful brothers who sure do know how

to make the people's music - but do they care any more?

There are only a couple full-fledged rock and roll songs on this album and, like Jerry Lubin of WRIF says, coming from the Stones "that certainly is a disappointment." Most of the tunes are very slow and sad, depressing, even. "Sister Morphine" is the lowest -- it's the scariest by far too, but certainly not the only song that refers directly to the use of hard pig dope. The last time around Jagger said in "Monkey Man," "All my friends are junkies/But that's not really true," but there are so many hard drug references on this new album (roughly half the tunes mention bogus dope outright) there's little doubt as to what the Stones have been doing in their spare time lately. UGH!

The Stones do manage to get it on for two tributes to some sisters they know, even though the music is righteous the words leave us flat. The woman who inspired the rocker on side two is called "Bitch" while the black sister that "Brown Sugar" is about must be embarrassed to hear the stupidly racist line "How do you dance so good/Just like a black girl should." Yassur, massa Mick, all us black folks jes got dat nat'l rhythm, jes like you said.

Now people dig -- I love the Stones as much as any one person can, you know, it just makes me sick to my heart to see these brothers shoot up dope and then make up songs about it, so smacked and coked out they don't even dig playing a good fast rock and roll beat very much anymore. Are these the same people that did "Mother's Little Helper," "Satisfaction," "19th Nervous Breakdown," "Street Fighting Man," "Sympathy for the Devil," and all those other killer smashes?

And, sure, there are plenty of brothers and sisters around who are fooling with bad dope, but the Stones should know what that leads to, what it led Brian Jones to -- and if they are going to be rock and roll stars they owe it to us to take us higher, not bring us down on another smack/death trip.

If the Stones were really as together as their hip image they'd give up some of their money to their people, who need it, instead of throwing it away to the smack dealers. If the Rolling Stones were a real people's band they'd stop letting the money from the sales of their records go to honks like the owners of the Kinney Corporation and they'd start their own record company so they could help other people's musicians get it together ...

But I guess I'm just fantasizing there. The only reason I do that, though, is because Mick Jagger is singing his reality in my ear and it goes like this:

You know and I know

In the morning I'll be dead."